To celebrate the anniversary, SIMON CARTER - a former sports journalist at the Express & Echo and author of a 2016 book on his life following the Grecians - will be taking us all back to 1989/90 in every home programme this season. Here, he looks at City continued struggles on the road in the midst of some impressive home results.

Another away loss, another dose of Terry Cooper criticism - this time after a defeat which dropped City down to eighth place while taking Stockport into top spot. 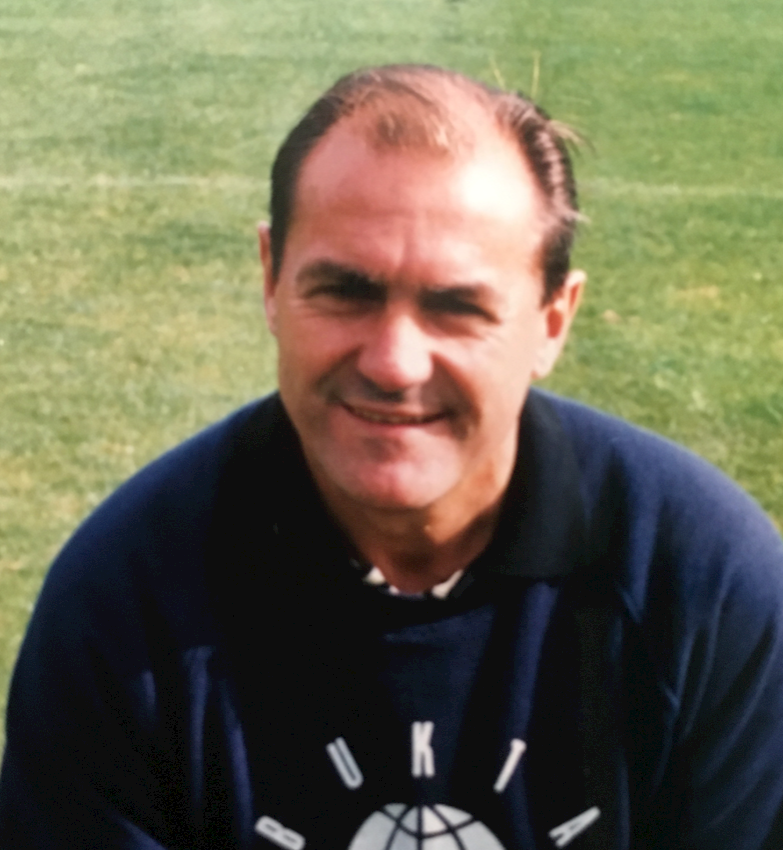 City boss Terry Cooper, who was fuming after another away day defeat

‘We’ve no chance of getting out of this division until the players are switched on for 90 minutes in every game,’ moaned the manager. ‘We went to sleep at two free-kicks and got punished.’

The match was billed beforehand as a shoot-out between the top two highest scorers in the Fourth Division - Darran Rowbotham having 11 league and cup strikes, one more than County’s Brett Angell.

But neither player managed to add to their tallies at Edgeley Park. Instead, it was County’s £60,000 club record signing Keith Edwards - a former Sheffield United strike partner of Steve Neville - who grabbed what proved to be the decider.

Ian McInerny scored early and Edwards added a second in the 50th minute. Sub Richard Young grabbed an 80th minute consolation, while Rowbotham struck a post in the dying seconds.

The teenager had reportedly been watched by Arsenal, Liverpool, Manchester United, Nottingham Forest, Chelsea, Aston Villa and Coventry, but it was Terry Cooper’s good friend Graeme Souness who won the chase for his signature.

‘We’ve got Exeter City out of financial trouble,’ said Cooper, though City would only receive a further £100,000 as Vinnicombe left Ibrox in 1994 having only made 27 appearances. 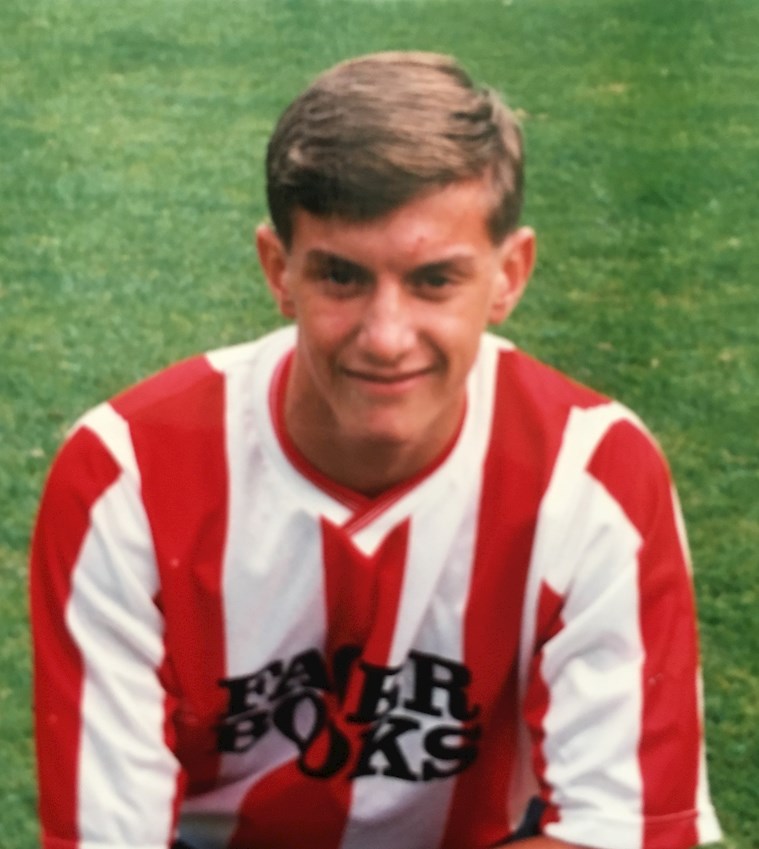 On his way to Rangers: Chris Vinnicombe

As was the case against Doncaster on the opening day, City’s heroes against Colchester were Steve Neville and Dave Walter.

Neville scored both City’s goals while Walter saved a penalty against a visiting side who were losing for the seventh league game in a row.

With Clive Whitehead beginning a three-match suspension for his red card at Rochdale, Paul Batty started his first home game in over a year.

Colchester claimed a shock lead through Tony English - set up by former, and future, City striker Trevor Morgan - before Neville weaved his way past three defenders to level six minutes before the break.

Neville struck again 20 minutes from time when Brian McDermott eased past Clive Stafford - who was back at St James Park two months later, this time on loan - and the assistant manager struck from close range.

What a difference seven months makes. In May 1989, after City had brought the curtain down on the season by losing at home to the Red Imps, Terry Cooper made his players run nine laps of St James Park afterwards as a very public punishment.

Fast forward to November 1989 and City cantered to a sixth successive home league victory - and against the team with the best defensive record in the fourth tier, having conceded just nine goals in 14 games.

‘But City made mincemeat of that proud boast,’ wrote Trina Lake in the E&E.

Imps striker Paul Smith was sent off just after the hour mark for a crude foul on Scott Hiley.

But City were already 3-0 up and Cooper said: ‘We completely and totally outplayed them.’

Jim McNichol opened the scoring on 19 minutes when he thumped in a header from Brian McDermott’s cross.

Darran Rowbotham headed in a Hiley cross at the back post and Steve Neville completed the win three minutes before the hour mark.

There was no post-Chris Vinnicombe departure hangover with Richard Dryden settling into the left back role and Richard Young brought into the starting XI.

Paul Batty’s first league goal for 13 months - an 89th minute header - secured Exeter a third away league win of the season and lifted them into second place, just two points behind Southend. 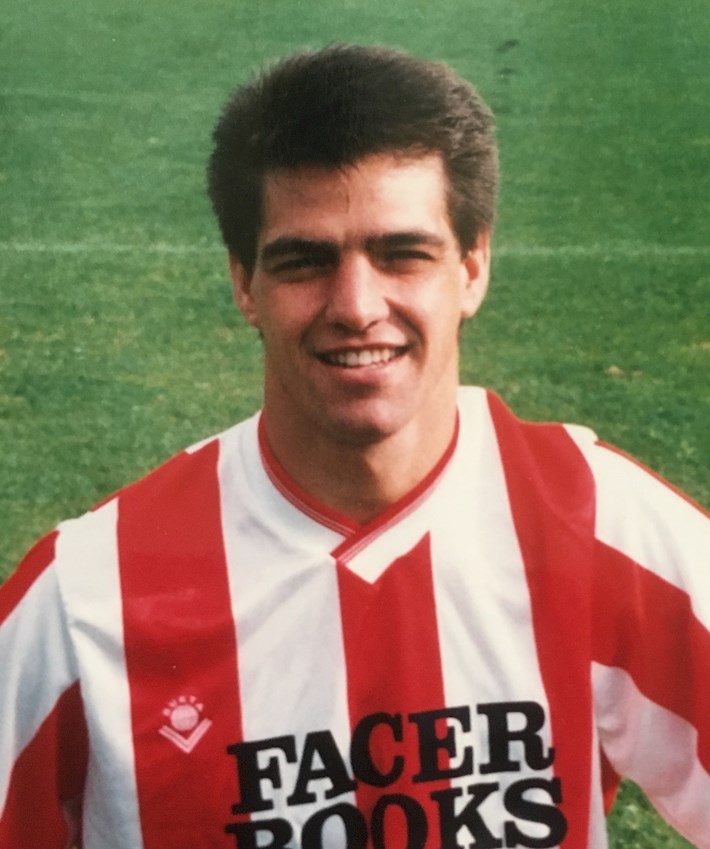 Paul Batty on target for the first time in 13 months

Ex-Torquay striker Paul Dobson had put the hosts into a first half lead, with City having to wait until 20 minutes from time to level through Darran Rowbotham after keeper Ian Ironside couldn’t hold a Brian McDermott screamer.

The game also saw Steve Harrower come on as a second half sub for Richard Young - his first competitive appearance since December 1988.

Shaun Taylor ended up with four stitches in a head wound. But his ears were probably the sorest part of his anatomy as Terry Cooper blamed his skipper for the Welsh club’s 62nd minute leveller.

‘Shaun had a rush of blood and decided to step up and try to play offside when he didn’t need to take that chance,’ said Cooper after watching Geoff Hunter cancel out Darran Rowbotham’s sixth minute opener.

It was City’s 24th game of the season but Cooper said: ‘I wouldn’t use that as an excuse. It was all a bit too frantic today. Danny Bailey and Paul Batty panicked a bit in midfield. I got the impression that Batts was trying to win the game on his own and he’s no Maradona.’

Cooper handed a debut to loanee Tony Coyle on the left side of midfield and gave Tony Frankland his Football League debut due to injuries to Brian McDermott and Richard Dryden.

Coyle, 29, had been playing for non-league Northwich following his summer release by Stockport, while Frankland, 17, had made his first team debut at right back in the FA Cup win over Dartford in midweek. Frankland was to make just three more league appearances that season - three more than Coyle, who was never heard of again.

The Wrexham stalemate was City’s second home draw in nine league games. Incredible to think that, of the remaining 14, Cooper’s men would only fail to win one of them.

Yet again, Terry Cooper didn’t hold back in his condemnation of his players’ performance.

Though it was only City’s second league loss in 11 outings, Cooper declared: ‘We have no chance of going up if we can’t come to places like this and get at least a point. The worst we should have got today was a draw but while we continue to give away sloppy goals we are kidding ourselves about being promotion contenders. I’ve told the players it’s time we made a few changes.’

After pre-match fog lifted - the game was only given the green light at 2.30pm by referee Roger Pawley - striker Mark Gall netted the winner for 15th-placed Maidstone (City started the game third) on 28 minutes.

Ian Benjamin was replaced for the last 16 minutes by manager’s son Mark Cooper, making his second City league appearance against the club he was on trial with a few months earlier.