This season marks the 30th anniversary of Exeter City FC winning what remains the club’s only divisional title in the 99 years since the club were elected to the Football League.

To celebrate the anniversary, SIMON CARTER - a former sports journalist at the Express & Echo and author of a 2016 book on his life following the Grecians - will be taking us all back to 1989/90. Here, he looks at the promising signs on show in the pre-season campaign.

In a sport of countless clichés, one of the most regularly used in football is the ‘pre-season results don’t mean anything’ line.

Every summer this is routinely trotted out by managers, players and supporters of clubs from all levels of the pyramid. And like most clichés, it’s trotted out for a very good reason, as it is generally true. However, thirty years ago, City’s pre-season certainly showed many signs - for those that were looking - that 1989/90 could well turn out to be no run-of-the-mill season.

For in successive St James Park friendlies we defeated a First Division club and one from the second tier. Bearing in mind we were a fourth-tier team, this was no mean achievement especially as the top-flight club, Coventry, had finished seventh in 1988/89. For once, pre-season results did mean something.

They meant Exeter City Football Club were about to become a Fourth Division force to be reckoned with.

The 50 or so City fans who made the trek to the north Cornish coast were given their first glimpse of the flowing locks that belonged to triallist Danny Bailey. Making his Grecians debut, Bailey made a dream start by firing City into a first minute lead. But this was no goalscoring central midfielder Terry Cooper had unearthed from Wealdstone - just six goals in over 200 professional City appearances was to confirm that; instead, Bailey was as infectious, charismatic bundle of energy, tough tackling, fierce determination and an eye for a pass, a combination that was to help place him firmly in the pantheon of club cult heroes long before his debut season had finished. 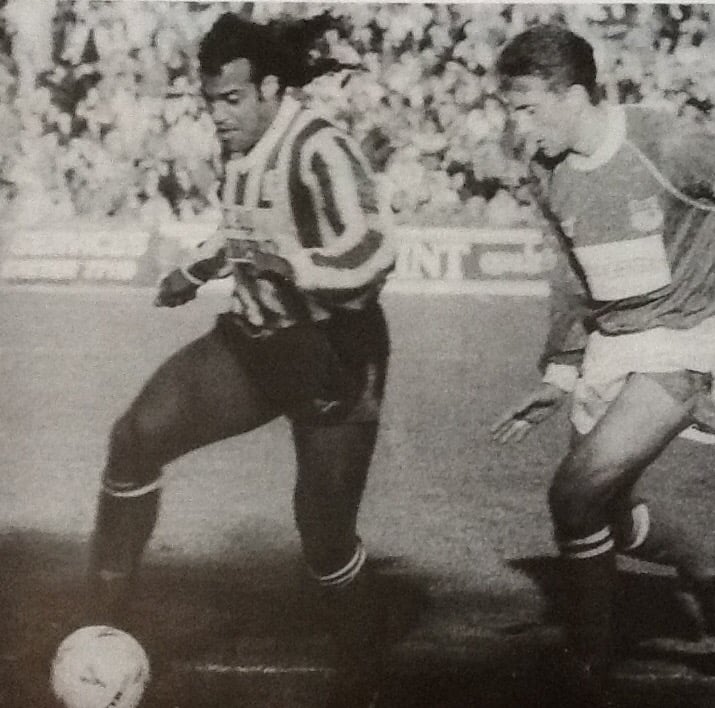 Danny Bailey (left) who scored on his debut

Richard Dryden and Brian McDermott saw City into a comfortable half-time lead, with Dryden completing the scoring in the second half on a night where Jim McNichol came off the bench for his second City debut - five years after his first.

The following afternoon, a mainly reserve side went nap at the Cat & Fiddle training ground against the Western League part-timers. One of the most familiar faces for City fans was to be found in the Torrington defence - twice Grecians player of the season Keith Viney, who had been released by ECFC at the end of the previous season.

Pre-match talk surrounded the future of City captain Shaun Taylor, with the club having turned down a bid from Scunthorpe amid interest from Scottish club Hibernian. And Hibs boss Alex Miller was at St James Park to see Taylor - rated in the £300,000 bracket by the club - heading the hosts ahead on 38 minutes after Jim McNichol had flicked on a Brian McDermott corner. It was 2-0 six minutes later when Trevor Peake fouled Steve Neville and Darran Rowbotham converted the spot-kick.

Having been outplayed in the first half, Coventry - who included the likes of Steve Ogrizovic, Brian Kilcline and David Speedie - improved in the second but could only manage a Gary Bannister consolation 18 minutes from time. A day after the game, Hibs dropped their interest in Taylor and signed Neil Cooper from St Mirren instead. Cooper told the Express & Echo: “Enough has been said for now and we should let it drop. I don’t want Shaun unsettled anymore.”

It was an advantage they held until the last 20 minutes when sub keeper Kevin Miller was beaten first by a Stuart Beavon spot-kick and then by Michael Gilkes after a poor Lee Rogers back pass.

Terry Cooper gave the E&E a typically no-nonsense one-word summing up of the display - ‘rubbish’ - while Jim McNichol, playing at right back, limped off first half with calf strain. He would only start one more game between now and early October.

For the second time inside a week, City defeated higher division opposition. And, like Coventry, Watford were no mugs, having lost in the Second Division play-off semi-finals just a few months earlier. The starting XI showed three changes to the one against Coventry, with Scott Hiley, Danny Bailey and Richard Young replacing Jim McNichol, Paul Batty and Brian McDermott. Watford led 2-1 at the interval, Steve Neville replying in between goals from Paul Wilkinson and Iwan Roberts.

Neville set up Richard Dryden for a 68th minute leveller before grabbing an 84th minute winner after latching onto Shaun Taylor’s through ball to net past the onrushing Tony Coton.

In what was to prove a huge understatement, Terry Cooper enthused: “It’s shaping up quite nicely - we’ve got a few options in the squad.”

Darran Rowbotham grabbed his first two goals of the pre-season campaign against a Weymouth side who had finished bottom of the Conference the previous term.

Shaun Taylor’s early header was quickly cancelled out by Tony Pounder before Rowbotham struck twice inside 10 minutes - the second a superb overhead kick.

Martyn Grimshaw reduced the arrears before half-time, but City dominated the second half and added two more goals through Taylor and Richard Dryden.

Terry Cooper said: “The finishing was excellent again and our passing was good, but we conceded two sloppy goals, so I had to have a go at them about that.”

Brian McDermott scored the only goal after four minutes as City defeated a Cheltenham side who had finished 15th in the Conference the previous season. 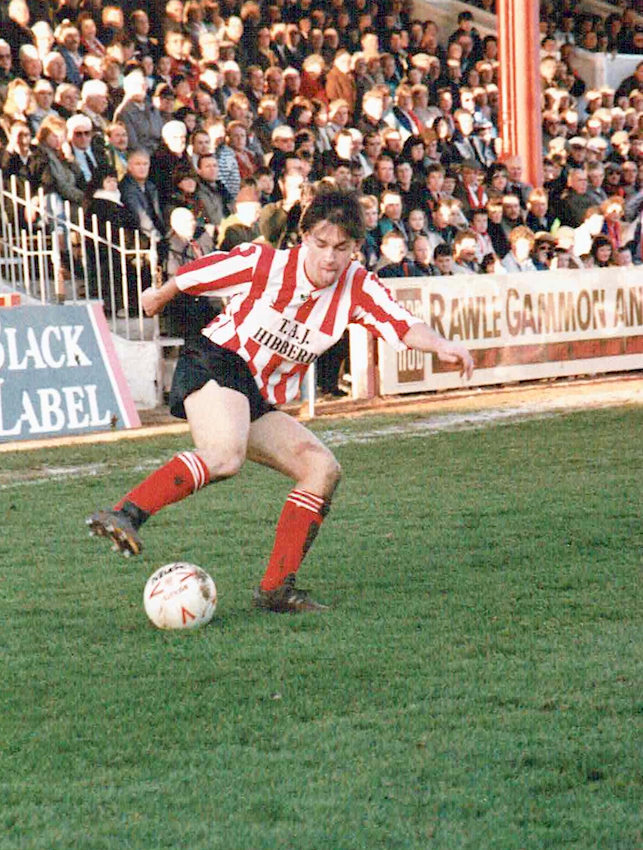 Brian McDermott who scored an early goal for the Grecians

One talking point from the game was the sight of striker Richard Young playing alongside Shaun Taylor at centre half - an experiment that was never to be used again!

Three days after the Cheltenham win, the E&E revealed Danny Bailey - who had been on trial for the whole of the pre-season campaign - had signed a one-year deal, due in part to continuing doubts over the fitness of Paul Batty and Ian Benjamin. Intriguing to think, therefore, that if Batty and Benjamin had been considered match-fit, City fans might never have heard of Danny Bailey. As always in football, one player’s bad luck - well, in this case two players’ - was another one’s good fortune. After being released by Bournemouth on his 18th birthday, Bailey - now 25 - had spent two years in Cyprus before returning to England to play for a raft of London area non-league clubs including Grays, Dagenham and Wealdstone.

E&E reporter Trina Lake wrote: “City fans have seen flashes of Bailey’s vision and attacking flair against Coventry and Watford, but the player reckons: ‘There’s a lot more to give Exeter City. I can be more of a ball winner but that hasn’t come out yet.’”

For the next part of this feature visit our website and social media channels at 9am on Monday.