To celebrate the anniversary, SIMON CARTER - a former sports journalist at the Express & Echo and author of a 2016 book on his life following the Grecians - will be taking us all back to 1989/90 in every home programme this season. Here, he looks at game number 43 - a match no City fan who saw it could ever forget.

City sealed promotion for only the third time in their 70-year Football League history. Another home victory at fortress St James Park, this time over fellow promotion rivals, made it 18 successes and three draw in 21 Fourth Division games.

The latest triumph moved Terry Cooper’s 11 points clear of third placed Maidstone and the Grecians now only needed two points from their final three games to be crowned champions.

And that was something no Exeter City team had ever achieved in the Football League, with the 1963/64 side promoted from the Fourth Division in fourth place - albeit only two points behind champions Gillingham - and the 1976/77 team going up in second place.

Express & Echo reporter Trina Lake captured the mood when she wrote in the following day’s paper: “The champagne flowed freely after City’s patched-up side had guaranteed a top three place in front of a near capacity crowd ... Jubilant supporters flooded onto the pitch after goals from Steve Neville and Brian McDermott had made certain of the points.”

Trina added: ‘The biggest league crowd of the season - 8,271 - crammed into St James Park to see if City could triumph over adversity. Injury had decimated the team. Three of the regular back four were out along with the leading scorer. Did that deter Terry Cooper’s win-hungry side? Did it hell!’

With centre halves Shaun Taylor and Jim McNichol both injured - the former missing his first league match since September 1987 - Lee Rogers and Richard Dryden turned in performances that belied their inexperience.

Paul Batty returned from a loan spell at Cambridge to link up with Danny Bailey in the centre of midfield while Clive Whitehead and McDermott on the flanks operated ahead of full-backs Scott Hiley and Tom Kelly.

Southend, for their part, included two players who had appeared for Exeter earier in the season - the manager’s son, Mark Cooper, and fellow midfielder Ian Benjamin. It was Benjamin’s goal at Aldershot on Boxing Day that took City back to the top of the table. Now here he was trying to delay his former side’s promotion party.

Neville silenced the nerves five minutes before half-time - his 18th and City’s 100 goal of the campaign in all competitions - before McDermott added a second 19 minutes from time. 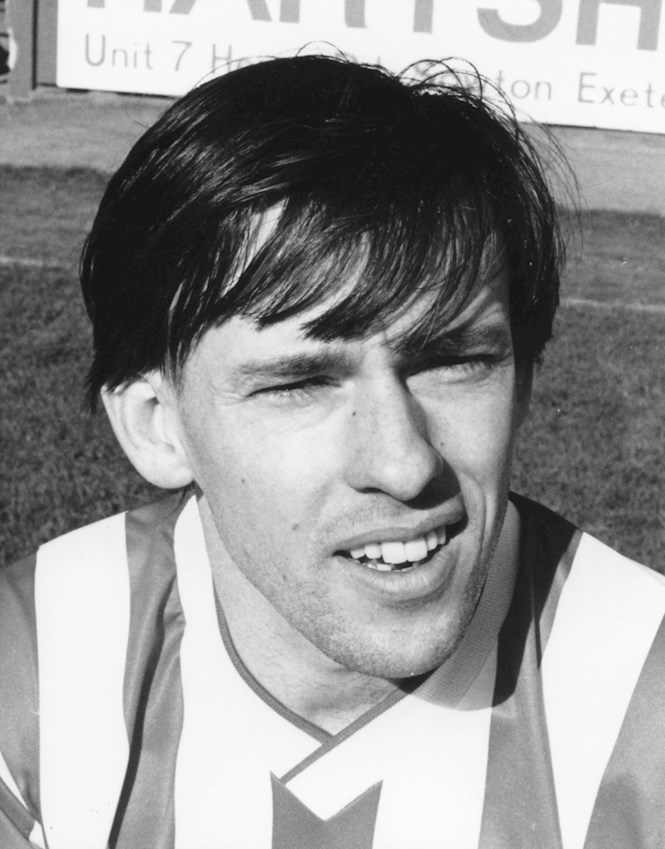 Both goals were set up by powerhouse striker Richard Young, playing against his former club and in such great form that the absence of 30-goal top marksman Darran Rowbotham was barely noticed. An ex-Exeter striker, David Crown, set up a tense final few minutes by firing a low shot past Kevin Miller.

“The final whistle was greeted with a lusty cheer and a good natured pitch invasion with players chaired shoulder-high back to the dressing room,” Lake reported.

Afterwards, Terry Cooper pledged himself to the club for life. “I don’t want to stay in football for the rest of my life, but I won’t leave Exeter for any other club,” he told the Express & Echo.

Apart from Birmingham City, who he took over just over a year later!

Cooper wasn’t getting carried away - yet. “I’m delighted we’ve won promotion but I want the title now," he stated. "When we do that, then I’ll go berserk.”

Both City goalscorers hailed promotion as a career highlight. Neville said: “I had promotion at Southampton and we won the league (Fourth Division title) when I was at Sheffield United, but this is a tremendous feat for a small club and it’s all down to the gaffer ... He’s been here two years and brought us to the brink of the championship. He deserves all the credit.”

McDermott added: “I’ve been at the Arsenal and it was brilliant when we got promotion at Cardiff (in 1988) but this is better because we could be champions,” he smiled.

I can still picture the evening of April 25, 1990. It was the first time I’d ever seen Exeter win promotion. In the subsequent three decades, I’ve only seen it happen twice more - and one of those was from non-league football so, in a way, doesn’t count.

In a nutshell, therefore, promotion is something that doesn’t happen too often at ECFC - just four times in our Football League career, an average of one every 25 years.

It was a glorious night; one that will forever provide wonderful memories when I close my eyes and recall it...