To celebrate the anniversary, SIMON CARTER - a former sports journalist at the Express & Echo and author of a 2016 book on his life following the Grecians - will be taking us all back to 1989/90 in every home programme this season. Here, he looks at the games over Christmas.

In a game of three penalties, Darran Rowbotham took his seasonal tally to 20 with two of them after Steve Lovell had put the visitors ahead from 12 yards.

After Mark Cooper had been penalised for a foul on 16 minutes, Lovell sent Kevin Miller - playing his first league game of the season after Dave Walter had been dropped following a 5-2 League Cup loss at Sunderland - the wrong way.

Rowbotham - who had missed a spot-kick three days earlier in the FA Cup replay win against Maidstone - levelled just before half-time after Clive Whitehead had been fouled by former City loanee Peter Johnson (five league appearances in 1985/86).

It was deja vu on 62 minutes when Johnson again fouled Whitehead and Rowbotham again converted the penalty past Ron Hillyard. As a result, he became the second fastest player in City history to reach 20 league and cup goals in a season - Tony Kellow having reached the milestone in 1980/81 on November 22. Danny Bailey set up Steve Neville to clinch victory with his 11th goal of the season.

Terry Cooper was also impressed: “It was smashing for our spectators who braved this weather. But then, if I lived in Exeter I’d come and watch because it’s so entertaining here.” It most certainly was, and it would get even more exciting.

“Superb City in top spot” roared the E&E’s back page headline after victory at the Recreation Ground. Ian Benjamin’s first league goal of the title-winning season - also his last, as it turned out - sent City two points clear at the top.

Benjamin was in the right place to head a Brian McDermott free kick past keeper David Coles on the half-hour mark.

Cooper brought back a sweeper system as Jim McNichol was ruled out with flu and obvious replacement Lee Rogers nursing a neck injury.

Tony Frankland returned for his second league appearance, while Fulham loanee Gary Elkins made a steady debut at left back.

“We can now relax at Southend on Saturday,” insisted Cooper. “I wanted three points from one of these games and we have got those from Aldershot. Now we can have a right go at Southend.”

“It Must Be Division 3 On This Form.” So screamed the E&E’s back page headline after this marvellous result against fellow promotion contenders Southend.

This was how Trina Lake began her match report: “Exeter City said farewell to the 1980s in magnificent style by consolidating their position at the top of Division 4 with a thoroughly deserved fifth away win of the season at fellow promotion contenders Southend.”

“They began the decade as a Third Division club and look to be well on the way back there after a six-year exile based on the evidence of a sparkling performance at Roots Hall.” 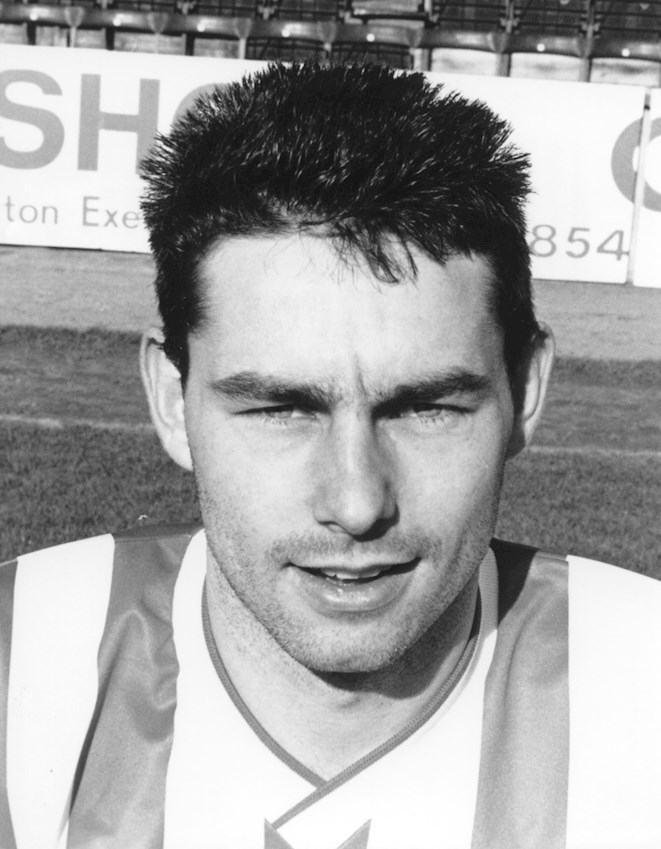 On target twice for City

Rowbotham struck twice to take his seasonal tally to 22 - just one short of his total for the whole of 1988/89 - to become the country’s leading marksman.

City’s deserved winner arrived 12 minutes from time when Whitehead sprinted to the byline and pulled the ball back for Rowbotham to provide a first-time finish.

It was a brilliant way to sign off a decade that started well for the Grecians and was certainly ending well too, but the less said about most of the stuff between 1982-1988 (pre-Terry Cooper) the better.

The kick-off was delayed for 16 minutes as fans queued to get in, and some were locked out in the end.

Trina Lake wrote: “Those that got in were privileged to witness a performance of sheer brilliance from City. It was men against boys. The quality of the football was unbelievably high at times with performances to savour in every department.”

Bradford City loanee Karl Goddard, 22, came on as a late sub - his 12-minute cameo turning out to be his sole contribution to the title success.

Cooper purred afterwards: “We’re playing some smashing stuff, and the manner in which we’ve won the last two games has pleased me. We played tremendous football for 90 minutes today.”

Gulls boss Dave Smith said his players would be desperate for revenge at Plainmoor on April 14. ‘I can promise you it will be a very different game then,’ he said. And it was, but City still won it...

City rattled off a fifth straight league win, but the manager still wasn’t happy. Cooper hit out at City fans who barracked his players during a sticky spell during the latest St James Park win.

“The people who do that are henpecked. They only come to the game to get away from their nagging wives,” he said. “We need the crowd to get behind us and if they’re not prepared to do that, they are better off stopping at home and arguing with the missus.”

“Some of them (the fans) seem to think we should win every game by three or four goals and it doesn’t happen that way. And there are a few idiots who aren’t happy if we’re not four up at half-time.”

Ian Bennyworth put through his own goal to give City a 22nd minute lead, with Rowbotham doubling the lead five minutes after the break.

There were jitters, though, when Joe Allon struck on 70 minutes - only for Rowbotham to settle nerves with his 26th goal of the campaign four minutes from time.

A controversial penalty saw City knocked off top spot. Bolton ref Tony Fitzharris judged from over 30 yards away, and without consulting his linesman, that Kevin Miller has brought down Kevin Noteman. In fact, the keeper had pulled out of a challenge.

Les Robinson converted from 12 yards to put Donny 2-0 up after 38 minutes, with Mark Rankine having struck a ninth minute opener.

Steve Neville replied eight minutes into the second half after keeper Mark Samways could only parry a fierce Scott Hiley shot.

Boss Terry Cooper said: “Without questioning the referee, he was the only person in the ground who saw it as a penalty. It was a satisfying performance. We were in total control in the second half, but I just had the feeling it wasn’t going to be our day.”