Terry Cooper, backed by chairman Ivor Doble and director Peter Carter, had taken a year to build his title winning team but going into the 1989/90 campaign, on the back of the pre-season victories over Coventry City and Watford, he was confident of success. In the first part of this four part interview he talks about that confidence and what a pleasure that side was to manage.

'For me, the most pleasing thing is that I think we've proved it's possible to come out of the fourth division playing entertaining football that people want to play to watch.'

That was the thoughts of Terry Cooper minutes after Exeter City had beaten Scarborough 3-2 at St James Park to lift the first, and to date, only league title in our 116-year history.

It was a joyous and extraordinary occasion as St James Park, bathed in glorious sunshine was packed to the rafters with fans who had seen the club go the entire campaign without defeat at home – winning 20 of their 23 league matches on their own patch.

“I still believe that as well,” said Terry, speaking in an exclusive interview on the eve of the 30th anniversary of the title win.

“My boy (Mark) is at Forest Green and I said to him: ‘If your information is good enough and you have got enough contacts, you can get out of that division playing good football. You can get out of any division playing good football, but you have got to have the players. If you haven’t got the players, then you can’t play total football. I had the right players, in the right positions and that enabled us to just to go out and play and I knew we would always score goals.” 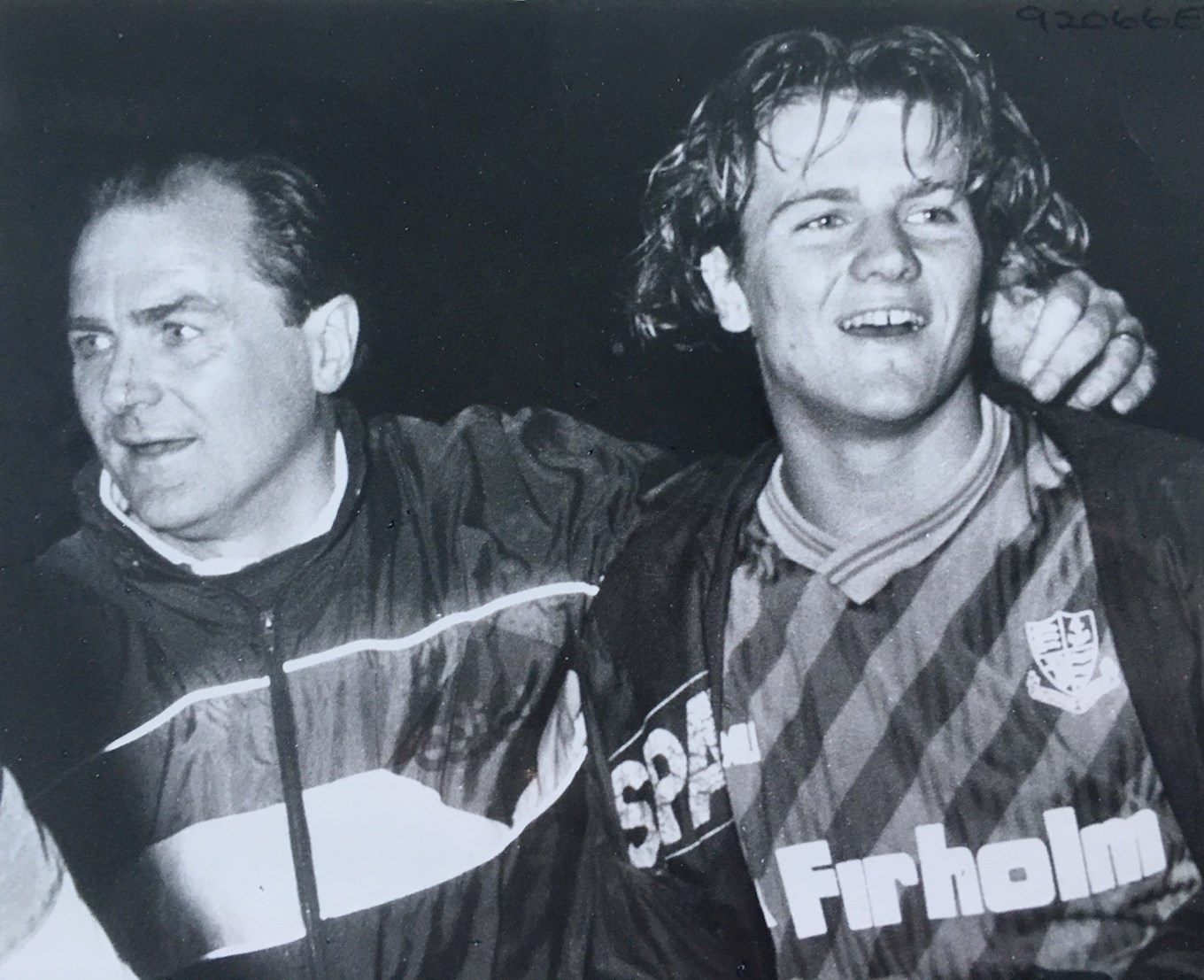 Terry Cooper, left, and his son Mark, who was part of the title winning team and is now a manager himself at Forest Green Rovers

And score goals City did. Eighty-three league goals in total as City lined up in a 4-2-4 formation with a wealth of talent up front, spearheaded by the assists of Steve Neville and the finishing power of Darran Rowbotham. It was a team that Terry knew he had could just tell to 'go out and play' in the confidence that they would score more than the opposition.

“It was a pleasure to manage them,” he said. “If management can be easy, then it was that season. It is like Pep Guardiola with Man City. He knows, most of the games he is going to win and, that season, I knew myself we had the ability for that division to absolute beat anybody.

“Grimsby Town were up there, with Alan Buckley, and Carlisle, with my mate Clive Middlemass, who used to be my assistant at Bristol City, and Maidstone, with Keith Peacock, but I knew that at St James Park I could just set them up to go out and play.

"With the ability we had within the squad, they didn’t need any shackles on them. I used to say: ‘Go use your ability, and play and sooner or later you’ll crack it and you’ll get the goals.’ I knew teams would find it difficult to hold out against us and stop us scoring in 90 minutes. We might concede, but it was one of those where I was confident that if they scored four, we’d score five.”

Log on to exetercity.co.uk tomorrow to read Terry’s thoughts on Exeter City’s differing home and away form that season and what it meant to him to win the title in terms of his management and playing career.