Exeter City’s under-18s suffered a 5-3 home defeat to Swindon Town on Saturday in their first Merit League One match of the year.

Despite conceding in just the second minute, goals from City duo, Nelson Iseguan and Frank Lovett, turned the game around after 11 minutes in what was extremely blustery conditions.

The Robins levelled things, before a fast start to the second period saw Town score twice in four minutes to make it 4-2, and put them well in control.

A fifth from the visitors was scored on 67 minutes, and despite a late strike from home captain Cheick Diabate, the three points went the way of Swindon, giving Chad Gribble’s men things to put right before they go again next weekend.

A feature of recent Exeter performances has been their ability to start matches quickly, however, they were the victims of their opponent's fast start on Saturday.

With just a minute on the clock, the away side mounted an assault down the left, and despite the initial pullback being cut out, the loose ball was emphatically guided into the bottom corner past a helpless Jack Arthur.

If the start wasn’t ideal for the Grecians, the response certainly was. Just five minutes later they grabbed an equaliser following Michael Lilley’s through pass to Iseguan. The winger’s mazy dribble ended with a powerful low finish to make it a goal apiece.

That goal spurred the team on again, and in the 11th minute, the hosts went ahead. An aggressive press saw Max Clark combine with Iseguan down the left flank. The full-back’s drilled cross was met by Lovett's smart run, and the striker converted from close range to make it 2-1.

With the windy conditions making it difficult for both sides to play their respective styles of football, the game was disruptive in parts, and no real pattern developed after such a chaotic start.

The high pressing game the Devon club were employing looked like that may have brought the fourth goal of the morning, however, it was the Robins who netted next in fortuitous circumstances.

Following an innocuous throw-in on the right side, the ball was worked into the middle before a speculative effort was sent goalwards. The strike was deflected and completely wrong-footed Arthur before bouncing into the back of the net.

Minutes later, Town squandered a half-decent opening when they flashed a half-volley just wide. City, however, finished the first 45 minutes stronger, and Lovett and Jack Veale both failed to convert good chances to give their team the advantage at the break.

With the game finely poised, the second half begun with the visitors looking to make the most of the wind in their favour.

A minute after the restart, Swindon saw one goalbound effort repelled, however, that proved to just be a warning sign as a minute later they retook the lead.

A throw-in on the left wasn’t dealt with, and after the away team advanced into the penalty area, the ball was emphatically fired past a helpless Arthur to turn the scoreline around once again.

But 3-2, become 4-2 very quickly, when Gribble’s side conceded a wide free-kick on 52 minutes. The whipped delivery deceived everyone inside the 18-yard box, and it bent inside the far post with no touch to double the Robins’ advantage.

That double-blow shocked the home team into a reaction, and had it not been for a fantastic save by the Town goalkeeper from Veale’s header in the 65th minute, the final 35 minutes may have been completely different.

Instead, the visitors continued to come forward, and Exeter’s Arthur needed to be at his best to deny them midway through the second half.

But Swindon weren’t to be denied a fifth. Following a well-worked short corner, a cross curled directly into the goal with the help of the wind to give them a three-goal cushion.

The Grecians grabbed a late consolation with five minutes remaining when Diabate bundled the ball home from a free-kick at the second attempt. However, the away side weren’t to be denied victory, and in a high-scoring affair, they were the ones who came away with five goals, and three points.

Exeter City under-18s coach, Chad Gribble, said: “I’m very disappointed with their first goal. We make a point about starting quickly, but the error in the build-up was of our own doing, and the players around the ball have to play to a structure and do better. The reaction showed what can happen when we have 11 players playing to a plan.

“It was a game of two halves really. I’ve talked many times about not taking your chances when you are on top, and Saturday was a real example of that. Frank Lovett and Jack Veale had two decent chances which we have got to take. We’ve got to work on adding that next bit to our game because we were winning the ball in high areas of the pitch, but we couldn’t take our opportunities.

“The quick start to the second half got us on the back foot. They were picking up a lot of the second balls which got them into areas of the pitch they could control. I thought they dominated the middle third and showed more quality and bravery on the ball. Their levels of physicality and athleticism we just couldn’t handle, but that is understandable considering the age of the players we have out there.

“The Under-16s stepping into the team really need to use this part of the season to learn about Under-18s football. We failed to cope with the senior elements of a game. It was a bit of a fight out there with the wind and the physical nature of the game, but when we turned it into a proper football match, we showed we have got the ability which was evident in the first half.

“I loved how we scored our first two goals, and for 30 minutes of the first half, we were good in and out of possession. But I think it was evident that we had a younger set of players out there and it showed the difference between Under-18s and Under-16s football. As coaches, it makes our job easier because we know what the players need to do to improve, but they have to be willing to learn, and willing to buy into what we are trying to do.

“We are away to Southend United next, who we know well as we’ve played them a lot in recent seasons. The message to the players will be the same, and they’ll provide us with a good type of test. They’ll have a more experienced team than us, but I wouldn’t want it any other way as I want my players to be challenged so that they can have better preparation for the future. My players just have to rise up and embrace the challenge.” 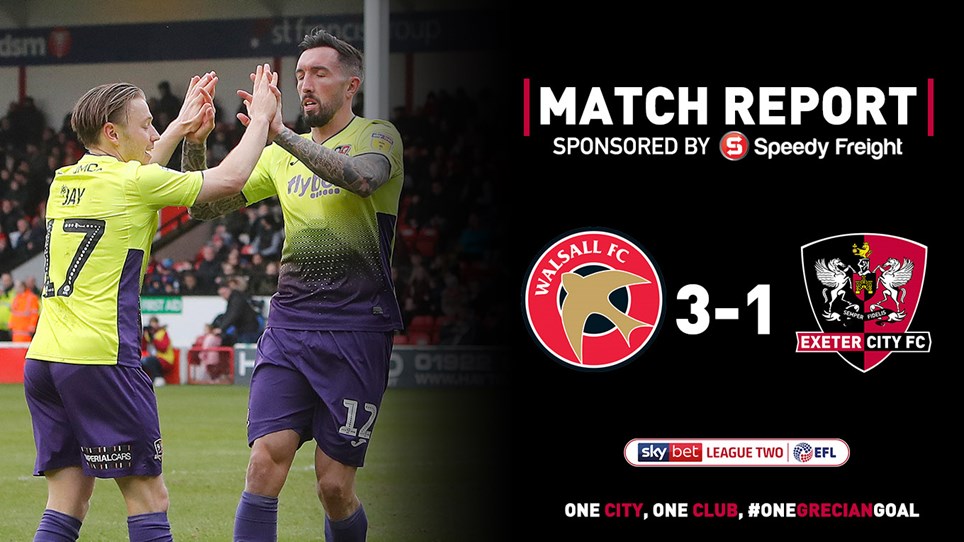 
Exeter City fell to a disappointing defeat at the Banks’s Stadium following a poor first half display and a controversial second half decision that went against them. 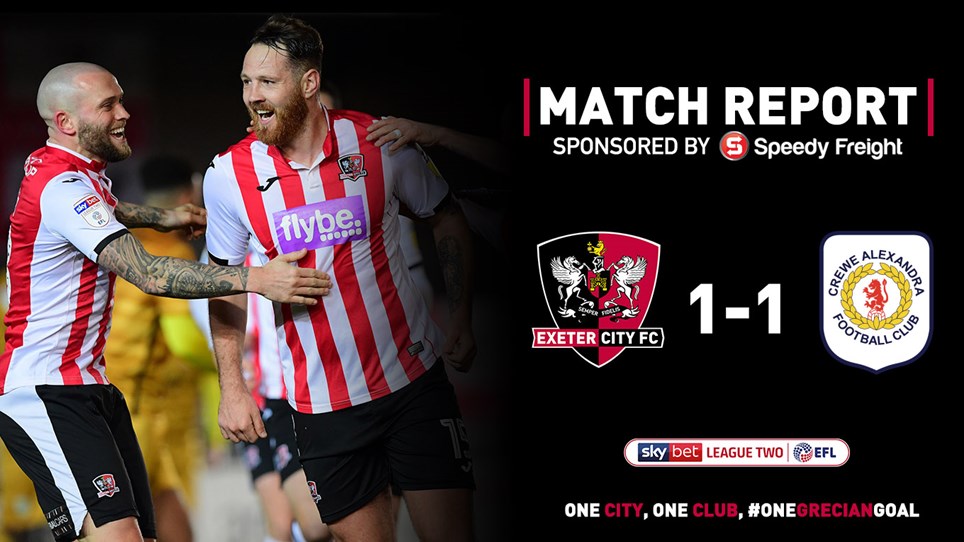 
Exeter City’s excellent home record remains in tact after they drew 1-1 with Crewe Alexandra in a top three clash at St James Park. 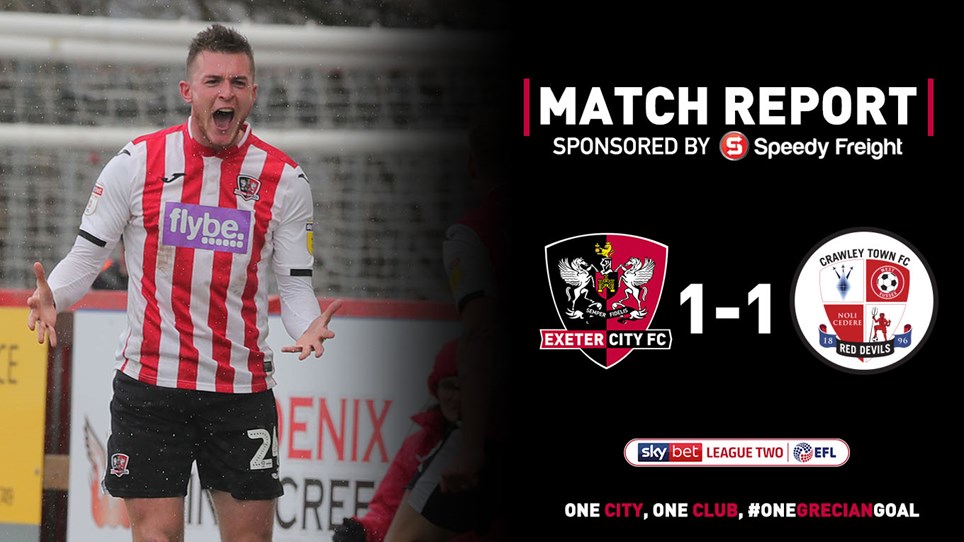 
Exeter City fought back from a goal down to earn a point at home to Crawley Town. 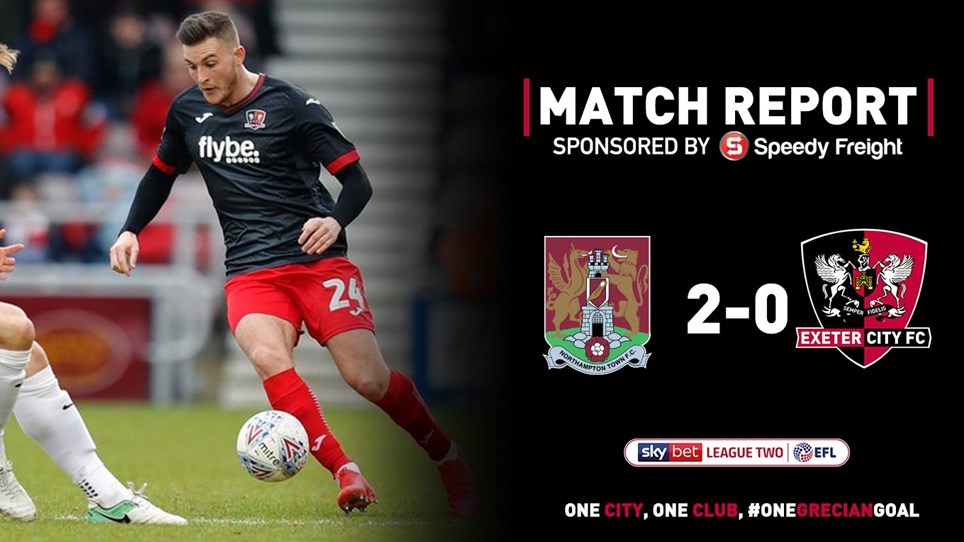