Footballers have no time for looking back. As soon as one game is finished - whether it is won, lost or drawn - another match is waiting just around the corner.

However, when Archie Collins takes to the field next Saturday, against current table toppers Swindon Town, it will be exactly 13 months since he hit the headlines for a wonder strike that gave the Grecians a 2-0 victory at the County Ground.

It should also mark Archie’s 34 appearance of the season – a rather unremarkable number on the face of it. However, when you consider that the 20-year-old midfielder made 33 appearances in his breakthrough season, it is a worthy milestone. That is because, while his wonder strike at the County Ground – his first goal in City colours caught the attention – Archie is a player who in his defensive midfield role goes slightly under the radar, despite his calmness on the ball and ability to glide past players or pick the time to pass, with assuring regularity.

However, when faced with the stats as well as the performances, nobody can argue that Archie hasn't developed as a player from last season to this. So, what does the 20-year-old make of his season so far?

“It’s been very good,” he said. “I’ve been involved in a lot of games this year, and the position we are in is where we wanted to be. So hopefully come the end of the year I’ll play in more games and push for promotion.

“Obviously, with it being my first-year last year, I learnt a lot, and I’m still really young and I’m learning all the time, so I’ve definitely developed.

“It’s a tough league to play football in and you’ve just got to be resilient and grind it out and have a good mental strength. I think the group that we have here has helped me a lot, and the players and staff have both helped me.”

Archie, a graduate of Exeter City’s Academy, has already made 66 appearances for the Grecians ahead of today’s match. He is yet another example of the excellent footballers Exeter City produce, with the likes of Ollie Watkins, Matt Grimes and Ethan Ampadu, now playing elsewhere, and Jack Sparkes, Joel Randall, Ben Seymour all flying the flag for the academy along with Archie.

It is not just his skill on the ball that impresses though, as Archie, despite being one of the youngest members of the first team squad, was given a great honour this season when he captained the team for the first time in their Emirates FA Cup first round match away at Cambridge. 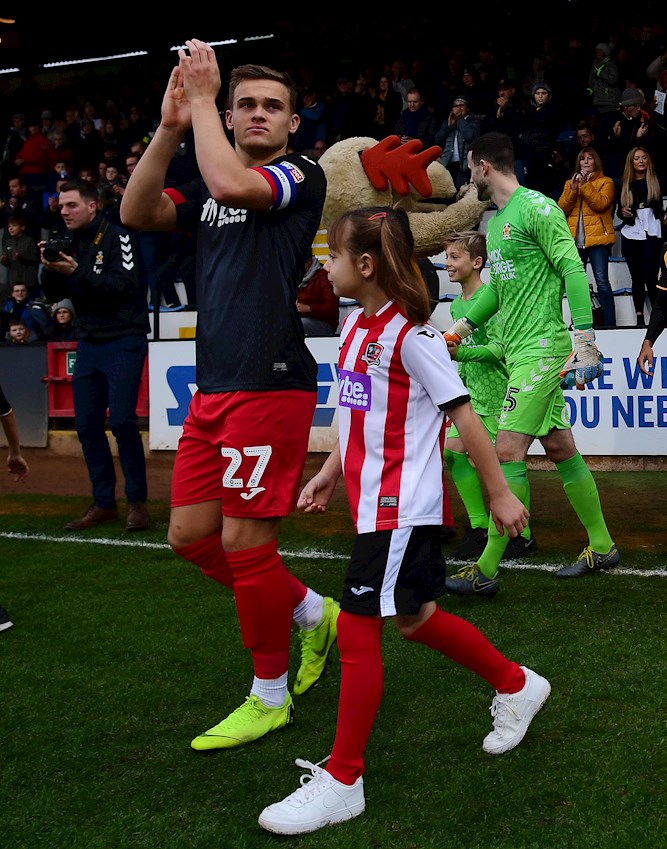 Archie Collins leading the team out at Cambridge United

“That meant everything,” smiled Archie. “Growing up and playing football for the academy every year and then to be given that honour to captain the side and for my family to see it, was a great feeling.”

It should not be surprising that Exeter City produces players of captain material – Dean Moxey, George Friend, Grimes and Jordan Moore-Taylor all graduated from the academy and went onto take the armband at City and other clubs higher up the division. So, what is it about the setup that produces captain material?

So, having almost surpassed his appearance total from last season, and captained Exeter City for the first time, Archie has moved forward and is already set to make this season better than the last. However, his improvement is mirrored by Exeter’s. When Archie hit the back of the net at Swindon Town, on New Year’s Day 2019, the victory and strike was somewhat tinged by the absence of leading scorer Jayden Stockely, who was on the verge of securing his move to Championship side Preston North End.

The 2-0 win moved City up to sixth in the table, but the team missed out on the play-off places by a single point. This season, City will travel to the County Ground firmly in the automatic promotion picture and, despite getting in the team on a more regular basis this season, Archie is convinced they have a much better squad this time around and with it a much better chances of promotion. Archie Collins signing an autograph for a young fan

“We’ve got a great squad now, great squad depth and ability all over the pitch,” he said. “Every game that I’m involved in I’m very happy to be, and I try to do the best for the team on the day.

It is that desire to do well that Archie, and the rest of the team has, that he thinks will be key to getting promotion this season.

“Keep doing what we are doing, keep plugging away and keep working hard on the training pitch," said Archie. "We are going in the right direction, we need to just keep up with what we are doing and stay on top of it. With the players we’ve got I think we will stay on top of it. You’ve got to just keep your head down and keep working hard, day in day out.”