You think we’d be used to this by now – the highs and lows of the play-off semi-finals – but it definitely doesn’t get any easier.

Of course, everybody is thrilled with the result, and it’s fantastic to see the name of our city spread across the country and I’m sure the Sky viewing figures were through the roof – which is great for the economy of our city and our area, something that is vitally important in these difficult times.

We’re all delighted to be heading to Wembley on Monday to face Northampton Town in the final, and so proud of Matt and the boys.

But I think we need to acknowledge the team behind the team, because behind the scenes there has been, and still is, a mountain to climb. You’ll have heard a lot about the boot room and I’m sure there are one or two names you already know, Matt, Dan Green and Wayne Carlisle, who all continue to do a tremendous job.

Then, of course, there are Gareth and Dan, our physios who have overseen a gargantuan effort to provide the protocol levels demanded by Covid-19 to allow football to even take place. They, backed by the doc Pete Riou, have done some job to get us to where we are today.

We should also mention Steve Hale, our goalkeeping coach. When Colchester’s Kwame Poku was through on goal, with the keeper to beat, thoughts were immediately ‘how well prepared are our goalkeepers’, we know the answer now - they are both prepared brilliantly by Steve, but he rarely gets the credit. Finally, behind the scenes, to Connor Derbridge, our S&C coach. 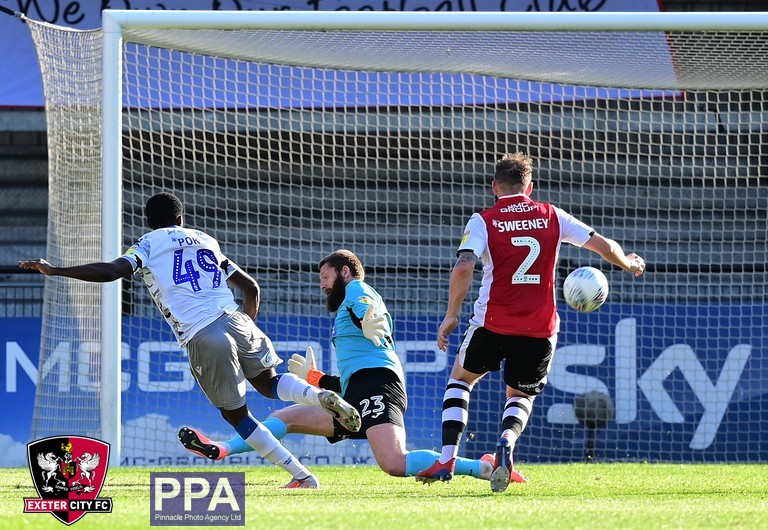 Keeping a team fit during an extended lockdown period in a worldwide pandemic is no easy task, but I think we all saw, that when everybody thought the players would be on their knees during another 30 minutes of extra time, that’s when all that effort and work came to fruition. It’s no doubt we finished the stronger, and of course it’s down to Connor, and the rest of the boot room team, including Marcus Flitcroft, although we don’t actually know what he does…

We must also mention the ground staff who have overcome their challenges to ensure the pitch was in great condition and looked fantastic in the late afternoon sun. It’s always dangerous to mention names in case you miss someone out, but suffice to say everyone played their part in yesterday’s win.

We’ve covered the boot room, now what about the ‘suit room,’ Justin leads that room with ever increasing efficiency, ensuring the wheels of Exeter City turn smoothly.

Everybody enjoyed the spectators, it was a great talking point, from the TV pundits to the players - everybody loved it. It was good to do some people spotting and there were so many faces and names we knew, especially dignitaries like the Lord Mayor of Exeter, Ryan Lowe, Di Lee, plus Phil Bialyk, the leader of the city council, sat in the front row. Some people, who shall remain nameless, said they’ve never seen him so quiet. 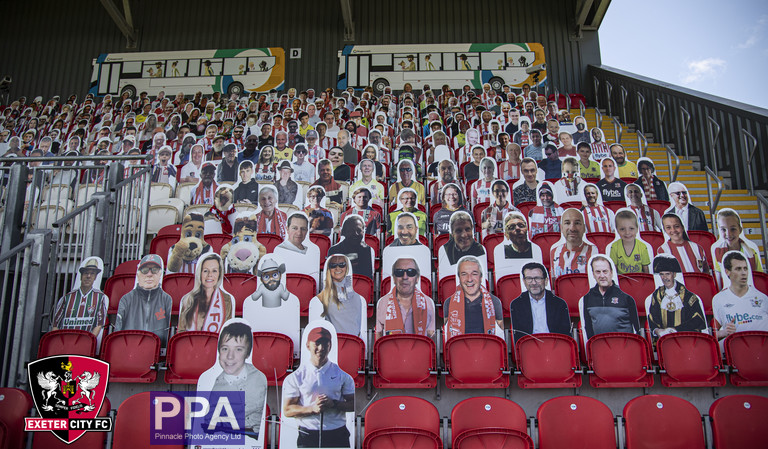 But, as ever, there is a story behind it all, they didn’t just march in by themselves…when the job to install them got complicated at the last minute we had to call on volunteers to help – a special thanks to Andy, Lynn, Sarah, Matt and the McQueenie mob, who gave up their time on a Sunday to ensure the ‘cardboard crew’ would all be in place for the game. And great news that the Supporters’ Trust has now paid to have the cut outs transferred to Wembley as a thank you to our fans. If you haven’t already got one, they are available to buy – but hurry there’s not much time left.

We are very lucky to have so many people willing to help us, whether that is installing fan cutouts or the work of all those trust members and volunteers, who constantly amaze us by their dedication and determination. If you haven’t joined the trust yet one of the advantages is the regular newsletters, the last outlining the generosity of our fans. It’s a good time to join and read the piece that chairman Nick does every week – highly recommended.

I’m not going to talk about the match, Matt has done that, and I’m sure Jake’s column which is universally recognised to be nowhere near as good as this one, will also focus on that. Fortunately for both of us Bentos has gone over to the dark side…

One of the highlights for me of Monday’s match was when the payers walked over for their final team talk, as if to clap the crowd – surreal in so many ways. in the photo above, whilst I wasn’t so happy that Brennan Dickenson was sat on my lap, Charlie was delighted to be providing an accommodating lap for Nicky Law - and we loved Wilf’s tweet which asked to have Sweenz removed from his lap so he could hear Matt’s post-match team talk.