Sometimes adversity has a way of making us stronger. Whether that be as an individual, team or community.

At Exeter City, we need very little reminding of this. Saturday’s game was meant to be the 20th anniversary of the forming of the Supporters’ Trust – a band of City fans who grouped together in the club’s darkest hour to save it from financial ruin.

Of course, the Trust 20th celebrations did not go ahead as planned. A day before the fixture – following a meeting of the EFL, the FA and Premier League – football in the top four tiers of English football was suspended until April 3 at the earliest due to the coronavirus pandemic. It is worrying and uncertain times.

However, speaking to Brennan Dickenson on the Thursday press call before the postponement news broke, the story of his career so far gave a fascinating insight on how being mentally strong can help you in troubled times.

Having signed for Exeter City on January 17, Brennan has had a good start to his career at St James Park, netting twice in 10 games and showing strength, pace and skill in his performances at left wing-back.

“The injury was hard to take,” said Brennan. “I think probably because my career was about to take the next step, with a few clubs interested in me at the time. However, mentally, I got my head around it very quickly – that it was, what is was. So, dealing with that side of things was quite good. I felt like I dealt with it quite well. You don’t realise how strong you are mentally before you are put through these tests.” 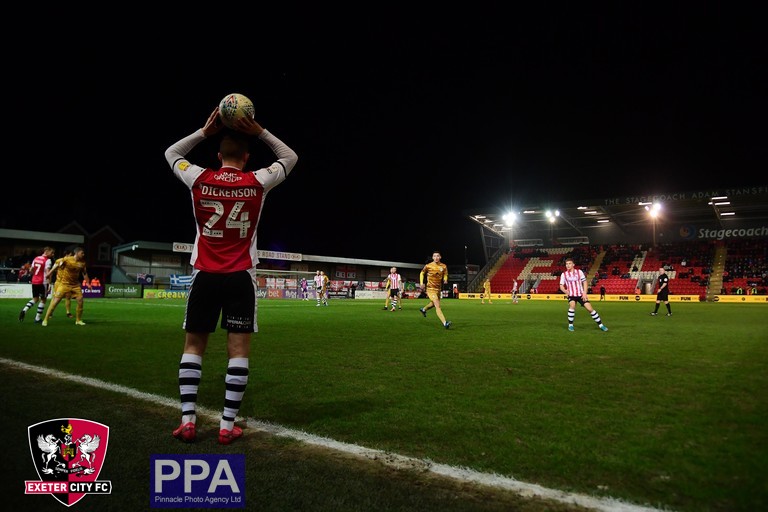 The country is being put to the test now. And, if panic-buying and stock piling of essential goods that could help the more vulnerable in our society is to be examined, it is one we are not passing with any great conviction.

However, Exeter City has always been a club that has looked out for those vulnerable people in the wider community. The work of the CITY Community Trust gets praise all over South West for its social inclusion, disability and health and wellbeing projects and it was only last week that local MP Ben Bradshaw praised the club for hosting a fundraising community meal at St James Park for those at risk of food poverty and social isolation in Exeter.

It is that sense of community and team spirit that Brennan has bought into very quickly, as highlighted by his desire to offer advice to one of the younger players at the club – James Dodd – after he suffered from the same injury as him.

“I have spoken to him (James) and said if he ever needs anything just to call me or message me,” said Brennan. “We had a good chat in the treatment room today and he seems quite upbeat and positive. However, you go through spells where you might dip a little bit and we are all here to support him no matter what and as a club that is what we will do.”

“It is hard for anyone to take that injury,” added Brennan. “But you have just got to try and stick to what you know, keep your head down and keep focussed, and you will come out stronger on the other side.”

Coming out stronger on the other side is of course Exeter City’s aim when their fixtures, hopefully, resume on April 4, and they will do that by sticking to their core values. Society will need to show the same mental strength and community spirit, if it is to emerge stronger from its own battle.