Lifelong Exeter City supporter Mike Roach, 73, placed on record his thanks to the club after receiving an unexpected phone call from manager Matt Taylor.

Mike, who has been following the Grecians since 1961, is currently self-isolating at home as he is over the age of 70 and has asthma, diabetes and a heart condition.

“I am 73 and I am currently self-isolating for three months,” Mike told a recent BBC Radio Devon phone in. “That is quite frightening in itself and I have mental health issues which surround anxiety and depression.”

However, Mike – who volunteers at the club on a regular basis – had his mood lifted when he got a phone call from the manager, who was ringing round a number of elderly supporters to check on their well-being.

“It was totally unexpected and gave me a huge boost,” added Mike. “I have been a lifelong supporter of Exeter City and I actually met my wife up there in 1963. There was a crowd of a 11,000 up there and we just so happened to end up standing next to each other and a year later we were engaged. So, as you can see Exeter City plays a huge part of my life.

“Yesterday morning the wife brought the phone up and said ‘you have got a phone call’ from somebody called Matt, from Exeter City. I first I thought it was it was Matt Kimberley, who is a friend who works in the commercial department. So, I picked up the phone quite casually because Matt is an Aston Villa supporter and I was going to ask him how they’d been getting on as they are down near the bottom of the table.

“However, I picked the phone up and the person on the other side said: ‘this is Matt Taylor from Exeter City’. I was utterly, utterly speechless and anybody who knows me, knows that that is almost impossible.

“I had the manager of Exeter City on the phone and I was thinking ‘this is so surreal’. It is just the thoughtfulness. It was just a huge, huge lift and I am still on cloud nine.” 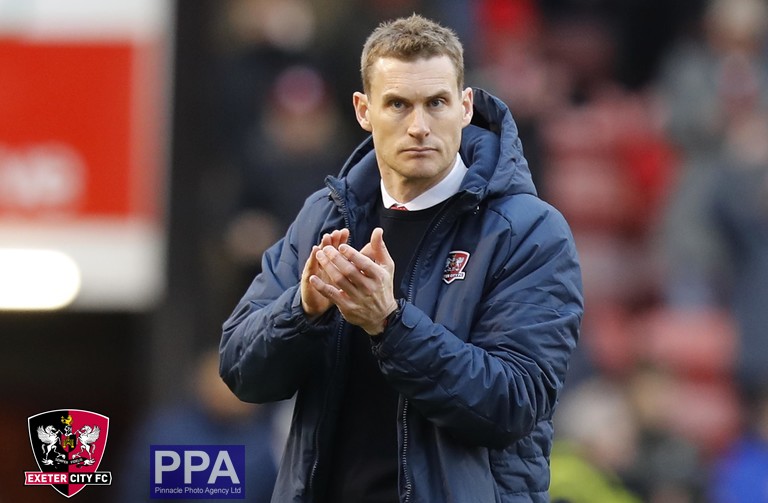 Matt Taylor was phoning round members of Exeter City’s Sporting Memories group. This is an organisation which is aimed at men over 50 who have either got early onset dementia, are socially isolated or have got other associated life changes diseases. It gets them together for a weekly chat about sport, but because of the coronavirus they have been unable to meet for some time.

“It is very hard for those people in that group, because they have been in social isolation for a while as they are seen as a vulnerable group,” explained Peter Ferlie, of CITY Community Trust, who puts on the Sporting Memory sessions.

“Some of those people will have difficulty getting out and having people to talk to and Matt (Taylor) had been in touch with CITY Community Trust to see what he could do to help. It was a fantastic gesture and it has really lifted their spirits.”

For those interest the Sporting Memories group is currently posting on Facebook here to connect with its members on a daily basis.