Today marks the 75th anniversary of the end of the Second World War in Europe, and so all at Exeter City Football Club wish to show our respect and thanks to all those who contributed to the end of that conflict, both at home and overseas.

In particular we are mindful to remember those closely associated with our club who lost their lives during the war.

In Exeter, our chairman Frederick Hunter, and Albert Potter – who made 94 appearances for the Grecians between 1924 and 1927 –were both killed during the Blitz in 1942, while overseas, former players Hiley Bamsey, Sid Gueran, Maurice Lock and Ralph Shields were killed in action, having served with distinction across the globe.

The final casualty of the war was Kenneth Halliday. A native of the West Country, having been born in Lyme Regis in 1925, Ken was serving locally in the Royal Air Force when he signed for the club as a guest player in 1944. 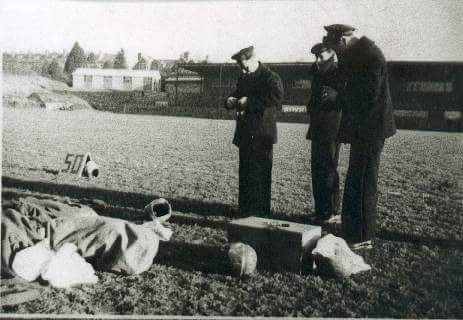 The promising young goalkeeper had been recommended by City legend Reg Clarke, and made his debut in January 1945 against Plymouth Argyle at St James Park. Continuing his training both on and off the pitch, Ken celebrated the original VE Day as he prepared to do his bit in the war effort that continued to be fought elsewhere.

Each of these men willingly played their part in the great effort to bring peace back to Europe and the rest of the world, and the spirit showed by them all, and their generation, is not forgotten.

Forever Grecians; we will remember them.