Exeter City welcome Carlisle to EX4 on Saturday for a 1pm kick-off. That gives enough reason then, to look back on one of the most extraordinary weeks in recent history.

Jed Penberthy gets all nostalgic on both legs of City’s famous League Two play-off semi-final with the Cumbrians in a classic encounter double-header.

The regular league encounters in the 2016/17 season were frantic enough. Carlisle done the double over City with two 3-2 wins- including just eight days earlier on the last game of the season. Exeter travelled to the far north with three changes to the line-up. Bobby Olejnik was favoured to Christy Pym. Craig Woodman and Joel Grant also started.

The terrific travelling City fans were in full voice ahead of kick-off and after 15 minutes they were roaring! Pierce Sweeney threw the ball towards the by-line for Watkins the run onto. The striker hooked the ball back over his shoulder into the danger zone, where Joel Grant was there to draw first blood.

Carlisle’s never-die attitude epitomised them throughout both legs and on 32 minutes they were level. After Jake Taylor was suspiciously dispossessed in midfield, Nicky Adams flashed a ball across the box. The ball ricocheted off Jordan Moore-Taylor at the near post to equalise.

Exeter regained the advantage in first half stoppage time. Joel Grant eased his way into the Carlisle box and laid Ryan Harley waiting patiently on the edge. Harley’s shot squirmed under Mark Gillespie to put City 2-1 up. 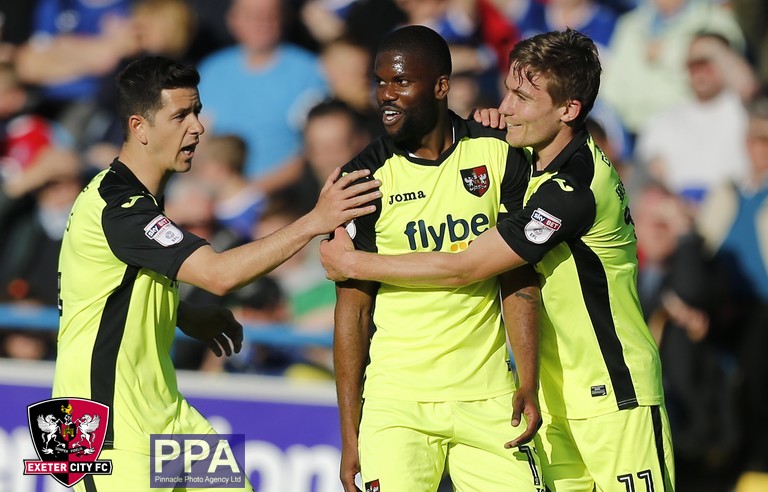 The Grecians found themselves two goals to the good on 56 minutes. Joel Grant caused more problems for the Carlisle full-back before setting the ball this time to David Wheeler. The City number 11 turned on the ball and found the far corner to extend the advantage, with his 20th goal of the season.

Watkins thought he put City out of sight shortly after, but his far-post finish was narrowly chalked out for offside.

The home-side needed some luck to pull themselves from the brink and that they got in abundance with 20 minutes to go. O’Sullivan found room to cross on the right flank. Olejnik misjudged the flight of the ball and fortuitously, Carlisle were back in the tie.

Exeter could’ve won the tie late-on, but Jake Taylor’s last-minute effort crashed off the outside of the post, to mean it was all to play for at St James Park.

Exeter were bottom of League Two in November, following a horrendous start to the season. Carlisle in contrast had been in the Automatic places for much of the campaign. So as the Sky cameras descended on St James Park, both teams had different motives to why they deserved the final spot at Wembley.

No one had quite recovered from the drama four days prior but did not have to wait long for the explosive sequel. Ten minutes in Ryan Harley floated a balled wide right for Wheeler. The winger brought the ball down neatly and shrugged off the Carlisle defender. His pull back was poorly controlled by Gary Liddle, and of Aldi strikers for the ball to fall to, Ollie Watkins profited to give Exeter the lead.

Carlisle pressed the most after the goal. There was a strong shout for a penalty waved away by referee Dean Whitestone. James Proctor fired high into the Big Bank and Adams also went close narrowly missing Olejnik’s post.

After the break City once again fell into the false sense of security when Ollie Watkins doubled his tally. David Wheeler again the provider as he broke free from midfield and played in Watkins. The then 21-year-old showed brilliant composure to cut back onto his “weaker” left foot and found the top corner with some aplomb.

As the Big Bank chorused Que Sera Sera for the whole county to hear, Carlisle rose from the ashes again. An 18-man-melee in the Exeter box after a corner somehow scrambled over Olejnik’s line, with Jason Kennedy claiming the final touch.

With regular time up, City hearts sank. Adams found space on the City left and looped a ball into the crowded area. John O’Sullivan, who scored the freak goal in the first leg, rushed onto the scene to draw Carlisle level for the third time across the tie, sending the away end into raptures. Kudos to the travelling Carlisle fans, making the 700-mile round trip on a Thursday night.

Every so often as an Exeter fan, there is an ‘I was there’ moment. Rob Edwards at Wembley and Watkins v Plymouth spring to mind. As Ryan Harley fired a tame effort into the hands of Gillespie in the Carlisle goal, and the game destined from extra time. I returned to the top of the Big Bank just as Jake Taylor found room on the Exeter right wing.

His infield pass found its way to Jack Stacey on the edge of the Carlisle box. 191 minutes into the tie, with the score 5-5 on aggregate, Stacey fires a rocket into the top left corner to write himself into Exeter City folklore with his first professional goal. Pandemonium. 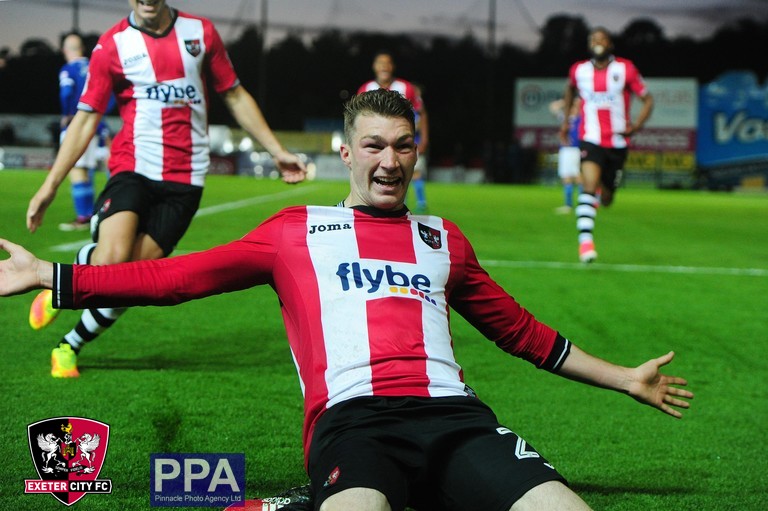 The crowd rushed onto the pitch on the referee’s whistle, and Exeter were heading to Wembley again. This was the craziest play-off encounter for Exeter City and Carlisle United, who themselves showed fantastic resilience through the whole tie, but relief more than anything, that Exeter City “finally, finally got rid of Carlisle”.