Exeter City Women progressed to the Third Qualifying Round of the FA Cup with a tight, tense victory over Swindon Town.

Once again, as they have on four of their five games this season, City came from behind, this time to knock out an impressive Town team.

The Grecian’s were dominating possession, but looked vulnerable to the pace of Swindon on the counter attack. A break on the left side of City’s defence resulted in Kyanna Orchard having to bravely block the on rushing forward, the resulting corner seeing the headed effort strike the top of the crossbar.

Again, City probed through good midfield play, but it was Jamie Lloyd Davies’ side that were creating the better opportunities. Kyanna Orchard was again quick off her line after a defensive slip, the shot that followed led to loud shouts for handball, the referee awarding a corner.

Eventually City made their large amount of possession tell, Emily Toogood, who had been striding forward all afternoon, struck from the edge of the penalty area and her shot was narrowly wide of the post. Toogood was again involved as her shot drew another fine save from Watson, a scuffed effort from the following corner not having the power to beat the Swindon keeper.

With the game finely balanced, it would be the visitors who found the breakthrough. Manfy Sharpe battled with Victoria Taylor and as the two went shoulder to shoulder the referee gave a penalty after the Swindon forward went to ground. Taylor stepped up and drilled home from the spot. 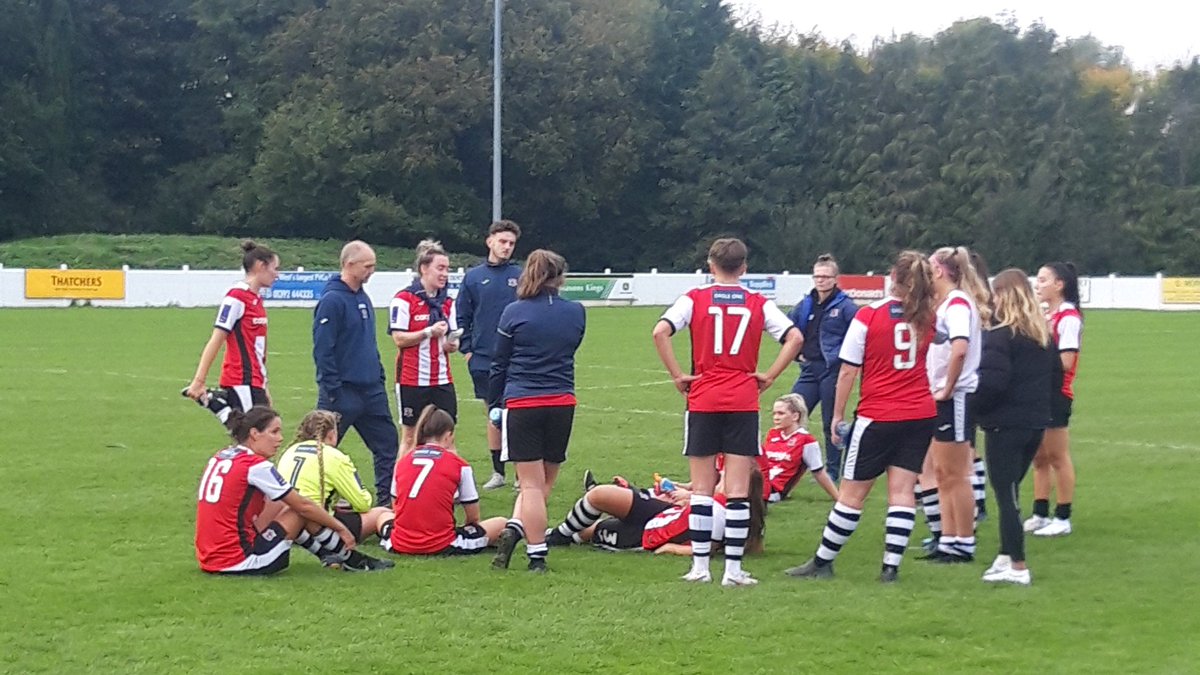 City came close to levelling on the stroke of half time. A speculative effort from distance saw a rare moment of poor handling from Aimee Watson and Esme Kilburn-Thompson was quick on to the spill, her effort was cleared off the line by the covering defender and the Grecians had it all to do in the second half.

Swindon had a glorious chance to double their lead as the second half began, a mix up in the City defence had led to a corner, the resulting effort struck the underside of the crossbar before being cleared. Anthea Kaptein then created the Home side’s best opportunity of the afternoon, her cut back onto her left foot resulted in an effort once again blocked by Watson, Kilburn-Thompson’s follow up shot not having the required power to beat the covering defence.

The game was now end to end, no more typified by Manfy Sharpe clearing off the line at one end before Emily Toogood’s battle with Watson continued at the other, the keeper again coming out on top. Toogood may not of found the net, but it would be her excellent cross that found substitutive Connie Pengelly to eventually draw City level and finally beat Watson. The young forward converting just ten minutes after coming on.

Swindon’s excellent wide play and pacy forward line continued to cause problems, whereas City’s approach was now starting to yield more joy. To say “it could go either way” may be a cliché, but it was certainly true here.  Hope Suominen, whose technical ability and hard running had tested the visitors all afternoon, finally got the reward her efforts deserved. City’s Number Ten beat her marker before showing the composure to cross for Pengelly who converted her second of the afternoon and put City in front for the first time.

Abbie Britton’s effort was blocked at one end, Manfy Sharpe blocked an effort at the other end as, in nearly eight minutes of injury time, these two sides continued to slug it out. Kyanna Orchard was quick off her line deep into that added time to make a fine save and the final whistle followed shortly. A fantastic afternoon’s football between two committed teams. A big crowd at Speeds Meadow also highlighted that the quality of this team is starting to get noticed and we can only hope to see everyone again this coming Sunday as Chesham United visit in League action.