Five games to go and a trip to Gloucestershire beckons in a “season-defining” week for the Grecians.

Ahead of Tuesday’s 7pm kick off, here’s an overview of our hosts from Forest Green Rovers.

Ball has stepped up as interim boss between now and the end of the season following the departure of Mark Cooper.

Dad, and World Cup winner Alan (Jr) managed the Grecians between 1991-94, being memorable for his brilliant use of his youth policy, with an early taste of what was to come for City.

Jimmy though has made a positive start to his time at the New Lawn, with a 3-2 win over Scunthorpe on Saturday.

The pitch itself recycles rainwater for stadium use and waste oil from kitchens is turned into biofuel. Plans are well in place to expand the New Lawn by building it almost entirely out of wood.

The Innocent smoothie company took over sponsorship rights early this season by inviting fans to rename the ground, though in their invitation they announced ‘Stadium McStadiumface’ would not be accepted.

It was A. Collins and A. Collins who both found themselves on the scoresheet when both sides met on Boxing Day, and the Forest Green version has kept adding strikes since. (Archie trumped him with that piledriver though). 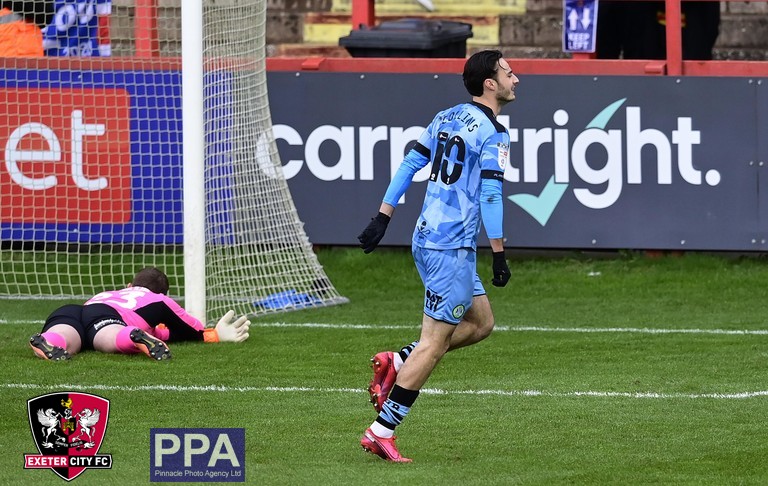 Seven goals and six assists this season for the 23-year-old striker has chipped in nicely behind Jamille Matt. Matt hpwever is out for the season with a hand injury and the impetus lies on Aaron Collins’ shoulders to get Rovers over the line.

The Welshman began at Newport, prior to signing for Wolves and Morecambe, via a few loans. In 2019, Collins signed for The Green Devils and has been a mainstay in the side since.

City have a great record against Forest Green but go into Tuesday’s six-pointer four points behind their opposition. The teams have met each other 22 times and Exeter are unbeaten in the last five.

Exeter picked up their first win of the 2020/21 season through goals from Nicky Ajose, Matt Jay and Josh Key.

Nigel Atangana scored and got sent off as City picked up a crucial three points to kick start the new year.

Ryan Bowman volleyed in his fifth of the season to score the only goal of the game at the Park.

In 1978/79 Rovers recorded the record victory in the FA Vase beating Avon Bradford 12-1. Kenny Gill scored a double Hattrick for the Greens.

By purchasing a match pass on the City website, you'll be providing much welcome income whilst games are played behind closed doors with all the funds going to the Grecians after 500 passes are sold.