Only five games left of the regular season for Exeter City. Next up? Forest Green Rovers in a 7pm kick-off tonight.

Such is the nature of the two sides, many players have featured for The Grecians and the Green Devils over the years. In a change of formula this week, Jed Penberthy picks out a Played for Both combined XI

Currently out on loan at Portsmouth, Lewis Ward would otherwise be between the sticks here at St James Park though his Reading Academy successor has been near faultless so far.

The boy from Berkshire has been brilliant for City since his move to Devon. But, whilst still at Reading, he played 12 games for Rovers in the 2018/19 season.

There is tough call for the would-be manager though Lenny Pidgeley could feature after his Johnstone’s Paint Trophy heroics against Plymouth Argyle and Johnny Maxted after his play-off prowess last year is biting at the bit for the number one shirt.

A three at the back with this system, Chris Todd is the first pick. He began his career at Swansea before signing for Exeter in January 2003. He was club captain in his final season at SJP and led his side out in the 2007 Play-off Final against Morecambe before joining Torquay. In 2011 Todd switched to Forest Green in a two-year-deal.

Jordan was another graduate of our fantastic academy who grew and developed across his time here at Exeter City. The strong tough-tackling centre-half was named captain in the 2015/16 season and marshalled the defence to two consecutive play-off finals. His last season at the Club saw him pick up Grecian Travel Player of the Year award. After moving to MK Dons with Paul Tisdale, Moore-Taylor now finds himself at the heart of the Forest Green defence and will be the sentinel to City’s attacks.

Coles was a fiery character in his time in Devon. He began his career at Bristol City in the early 2000’s and played for Hull and Bristol Rovers prior to teaming up with Tisdale in 2011. His time at Exeter City ended abruptly and he soon moved to Forest Green in 2014, not after 120 games for City.

Between the trio racks up nearly 500 appearances in Red and White and questions are raised as to how well these three would have been together? 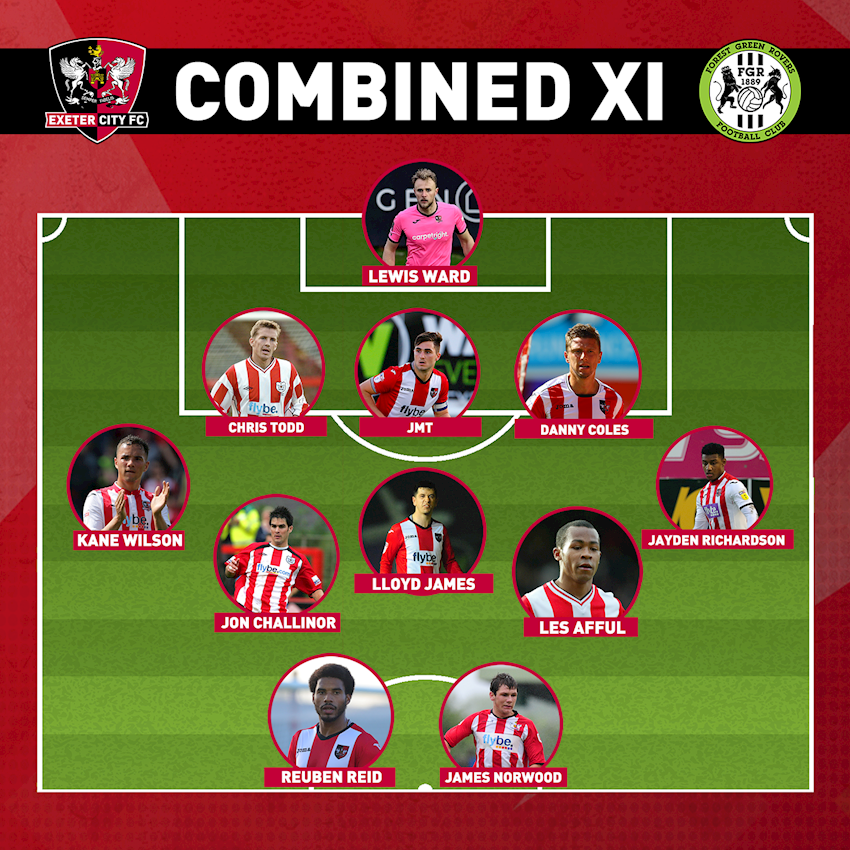 Impressive loan signings in recent years, both Kane Wilson and Jayden Richardson are now at Forest Green. Wilson came on loan from West Brom in 2017 and Richardson from Nottingham Forest last season. Both put in stella performances at right-back for the Grecians but in this formation, Wilson would switch to the left and Richardson occupy the right.

Wilson has a goal to his name this season and will be all fired up for a meeting with his former employers tonight.

This team looks stronger by the minute. Swept across the midfield three we see Lloyd James, James Norwood and Les Afful who between them have 165 appearances for Exeter City and a staggering 303 appearances for Forest Green.

Afful joined City as a trainee in 2001 and made his debut for the Grecians in a 3-0 FA Cup won over Cambridge City. He stayed after relegation and earned his self into folklore when he featured in the 0-0 draw with Manchester United in 2005. (I always seem to get that in somewhere, don’t I). He joined Forest Green in 2006 and earned two caps for the England C team.

Lloyd James made a swift impact in his two years at SJP. Whilst in the heart of midfield, James joined Jordan Moore-Taylor in reaching the play-offs. James moved to the New Lawn for an undisclosed fee in 2018 and now plays for Bath City in the Conference South.

Journeyman Jon Challinor spent two successful years at St James Park. As the Number 10 behind Lee Phillips and mentored by a fresh-faced Paul Tisdale, Exeter City reached the first play-off final to be held at the new Wembley Stadium. In the ninth minute, Challinor set up Phillips to give the Grecians an early lead.

JC went on loan to FGR in 2009 and played seven times in Green. But Jon contributed 21 times in Red and White.

With Two hundred career goals between the pair, goals are the name of the game for these two.. Born in Bristol, Reid began his career at Plymouth and grew recognition on the Cornish coast by terrorising the City defence in the Derbies of old. But he finally saw sense and moved to the light side in 2016.

Reid netted twenty times in 57 appearances for the Grecians helping the Reds to Wembley, via an iconic photo of the striker running across the SJP pitch with the Red Legion flag in hand. He signed for Forest Green in 2018 and scored 13 times for the club.

What are your thoughts on our Combined XI? Is there anyone you’d change? Let us know via our social media links and don’t forget to grab a match pass tonight, to see the current crop of players battle it out in a play-off six pointer...