Exeter City take on a Newport County side that is 3 points ahead of them in the final play-off spot as the season really heats up on Saturday.

Ahead of the match, Jed Penberthy looks back at three legends who have both sported the amber and black, as well as became legends for the Red and White.

Challinor racked up the miles and clubs before joining City in the Summer of 2005. Born in Northampton, Challinor made his senior breakthrough at Rushden and Diamonds in the late 90’s. After Stamford and Cambridge City were added to his CV, Challinor hopped across the pond to play for American fourth tier side Kalamazoo Kingdom. During the US off-season, Challinor sought a spell at St Albans City before moving back to the states.

In 2003, the midfielder returned to England with Aldershot Town, leaving his mark with 21 goals in 78 Conference apps for the Shots. To much bemusement, Challinor was released at the end of the ‘04/05 season and was quickly picked up by Alex Inglethorpe- who likened the then 24-year-old’s style of play to Everton legend Tim Cahill. 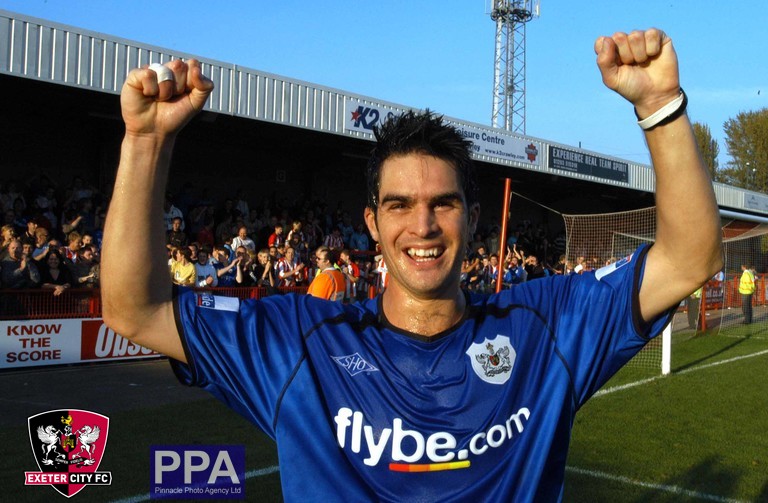 Challinor netted his first goal for the Grecians in a 2-2 away draw to Dagenham & Redbridge before netting against his former employers at Aldershot, in a 4-0 Boxing Day victory for City. A season later, Challinor was instrumental in Exeter’s route to the 2007 Blue Square Premier Final at the new Wembley and assisted Lee Phillips in opening the scoring. It would though be disappointment in his final game for City as Morecambe edged out the Grecians to gain promotion back into the Football League.

In the next three years, Jon returned to Rushden and Diamonds before making the move to Cambridge United- again missing out on promotion at the final hurdle, this time to Torquay United. Forest Green, Mansfield and Brackley Town followed before in 2010, Challinor signed for the Exiles on a short term deal.

“Ethans Dad” was an absolute gem of a player for City in the early 2000’s and has certainly left his own mark on our Football Club. Born to Irish and Ghanaian parents, Patrick Kwame Ampadu spent his youth in Ireland at Sherrads United and Belvedere, before getting his move to England with Arsenal in July 1988. 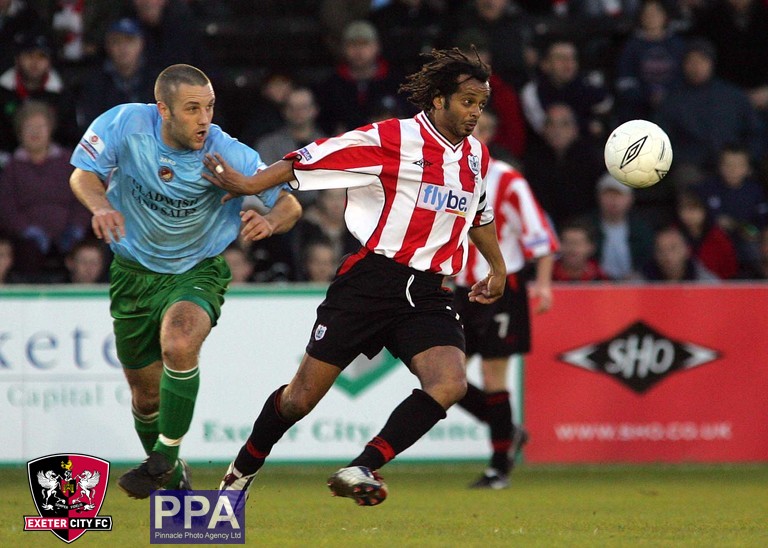 Working tirelessly in the youth and reserve set up at Highbury, Kwame finally made two appearances for the Gunners in 1990. He also gained an international call-up to the Republic of Ireland under-21’s. After a loan spell at Argyle, he was snapped up by West Brom in a permanent move. Whilst at Swansea in the mid 90’s he won the Football League Trophy and reached the Third Division Play-Off Final before moving to London with Leyton Orient.

Ampadu moved to St James Park in July 2000 and was a stalwart in the side for the next five years, despite City’s dropping form. He made his debut for the Grecians in a 2-1 defeat to Cardiff City and netted his first and only league goal for Exeter in a 1-1 draw to Dagenham. Kwame was an integral part of Inglethorpe’s side who earned a draw at Old Trafford in January 2005. The midfielder finished his time at SJP with 179 appearances for Exeter and two goals to his name.

In 2005, Ampadu moved to Newport Stadium to team back up with John Cornforth who had been his manager at EX4, yet his playing days were numbered. He only featuring eight times for the Exiles prior to his short move to Tiverton and eventually hanging up his boots.

After retirement, Kwame continued his love for football and in 2008 joined the Exeter City Centre of Excellence as an Under 18’s coach. Whilst helping to develop the next generation of Grecians, Kwame was simultaneously raising and training his own son to become a future Premier League and International talent. In 2016, Ethan broke an 87-year record held by Cliff Bastin as the Grecians’ youngest ever player (15y 10m) and earned a move to Chelsea- now on loan at Sheffield United.

Kwame gained recognition for his wonderful work with the Arsenal Academy between 2012 and 2018 and now serves as Assistant Coach to Thierry Henry, at CF Montreal in the MLS.

Our Record Goalscorer and one of the first member’s in the Grecians Hall Of Fame, Tony Kellow is a man synonymous with Exeter City Football Club.

Born and raised just outside Falmouth with six brothers, Tony grew up as a local electrician, helping out his local football Club, Budock Rangers. Prior to his £12,000 move to Exeter, Kellow hopped between Penzance AFC and Falmouth Town before moving to Devon to begin his professional career in 1976. 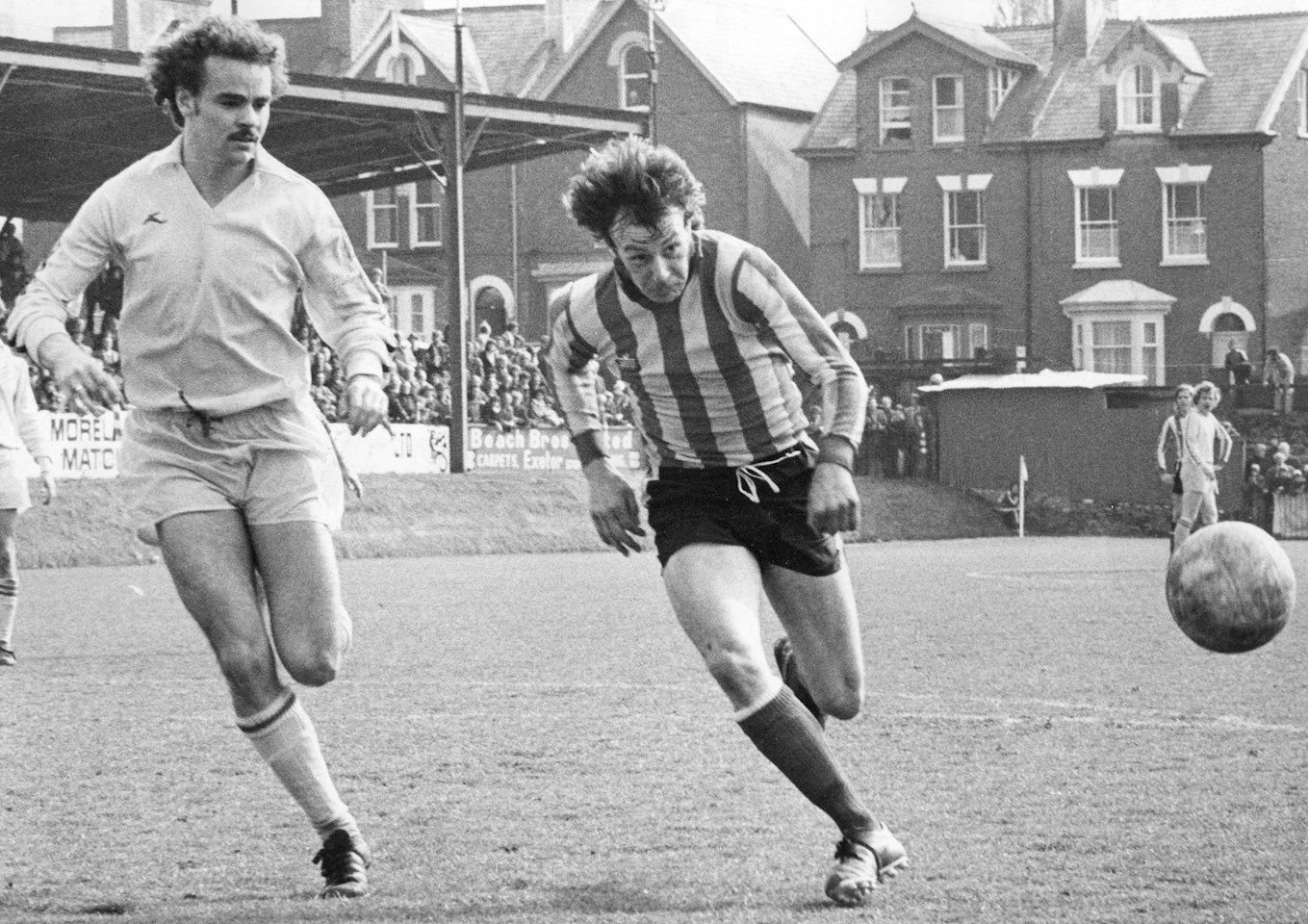 An instant impact and a taste for what was to come throughout his career, Kellow scored twice on his league debut for the Grecians against Hartlepool. He soon struck a deadly partnership with Alan Beer (who outscored Kellow that year) as Exeter gained promotion to Division Three in 1977. City’s top scorer in ‘77/78 gained a then-club-record move to Blackpool for £105,000. The Cornishman scored 23 goals in his time at Bloomfield Road.

Despite murmurs of Brian Clough wanting Tony at his European Cup winning Nottingham Forest side, Kellow returned to St James Park in March 1980 for £65k. A year later he wrote himself firmly into the heart, the soul, and the history books of Exeter City Football Club.

The 1980/81 League Campaign was not particularly memorable for the Grecians. A stable mid-table performance for Brian Godfrey’s men was put to one side, as Tony Kellow stole the show. With 25 League goals to his name that year, Kellow earned the Football League Golden Boot, beating Steve Archibald of Tottenham Hotspur in the process. It was this season, Kellow would go Toe-to-toe with Archibald on the pitch too.

After blitzing past Leatherhead, Millwall and Maidstone in the first three rounds of the FA Cup, Kellow and Exeter faced Leicester City in the fourth. A one-all draw at Filbert Street, brought the tie back to SJP, where a Tony Kellow hat-trick (to add to the three he had already amassed in the competition) blew away the Division One side to set up a fifth-round encounter with Newcastle. A 4-0 drumming of the Magpies at the real St James Park, meant the Football Leagues two top scorers in Kellow and Archibald would lock horns at White Hart Lane. Though it wasn’t to be for City on this occasion, Kellow had firmly stamped his mark as a City Legend, unsurprisingly earning the Player of the Year for the season.

In 1983, Tony moved to Home Park for a handful of games before finding himself in Wales with Swansea City. He never truly made his mark in Wales’ Second City, so swiftly moved back up the M4 to Newport County. Under Colin Addison’s management Kellow bagged eight goals for County in 20 games before coming back home to Devon.

In his final spell at City, Kellow was top scorer twice in three seasons, prior to working behind the scenes following his retirement. A gentleman off the pitch as well as on it, Kellow ran the Centre Spot social club and became Landlord of the Eagle Tavern on Howell Street in the early 90’s.

Tony Kellow’s legacy will stand the test of time at Exeter City. A true City icon and legend, Kellow scored a record 129 times for the Grecians in 298 games.