Exeter City is delighted to announce that One of Our Own, Sonny Cox has signed his first professional contract with the club.

Striker Sonny, who has been with the club since he was seven, had been training with the first team squad last season, and played a pivotal part in the FA Youth Cup as the under-18s made it to the fourth round. He also scored four goals as the under-16s lifted the EFL Floodlit Cup with a remarkable 7-3 win over Crewe Alexandra.

Like Harry Lee who has also signed professional terms, Sonny had strong interest from several Premier League clubs, but opted to stay with the Grecians to continue his development as a player. 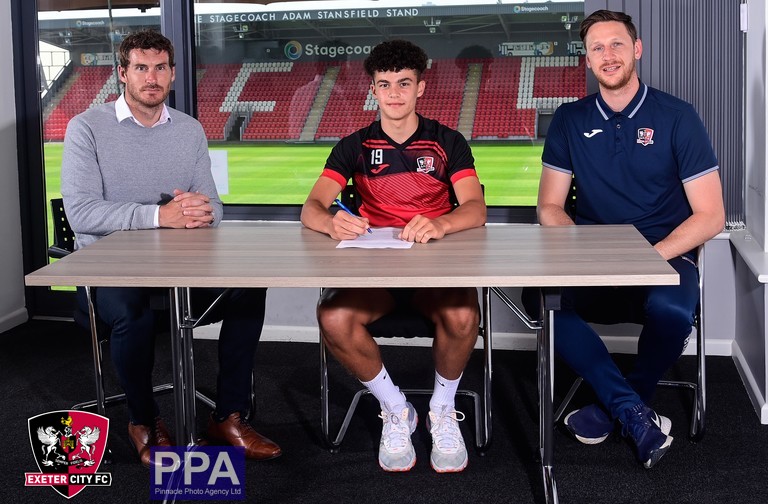 Manager Matt Taylor was delighted that Sonny signed a professional contract: "We feel it’s the right thing to do to let players go out and train at other clubs, but we feel there is no better pathway or bigger opportunity than with our first team."

When asked what excites Matt about Sonny’s game, his response was simply ‘Goals’: "There is more to his game.” said Matt, "But he scores goals and has a huge appetite to do so like all top strikers.

"Sonny has scored goals consistently at youth level. We have got to be mindful we don’t take anything away from his game but keep on adding layers on top of what is already a very good player.

"Sonny has spent a lot of time in the first team environment, and we want him to keep developing at a certain rate and he will only do that through training well every day and getting the game time he needs. If that isn’t with the first team it will be the under-23s and the under-18s, but first we want to get him with us in pre-season." 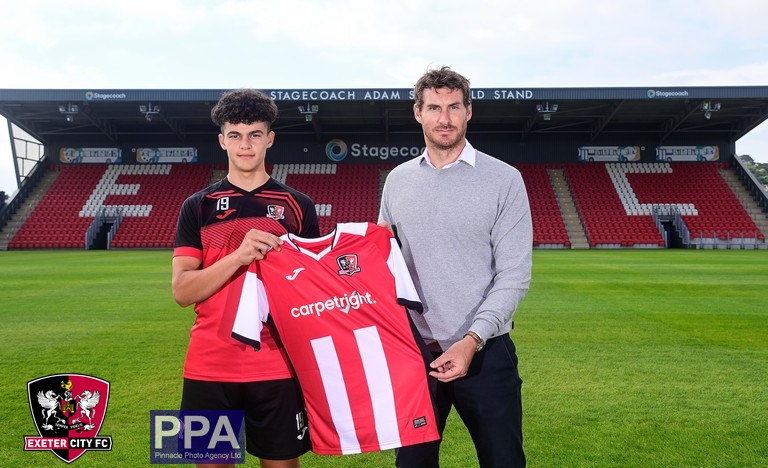 Speaking about signing his first professional contract Sonny said: "I’m really looking forward to pre-season, it should be really exciting.

"It has been an amazing experience with the Academy so far, going up through the age groups, meeting new people and playing against strong opposition.

"The main thing I can take into the first team environment is to work as hard as I can. If I do that, I can focus on improving myself as a footballer. It is probably the biggest jump you’ll get in football, going from the Academy to the first team and I’m looking forward to the challenge.

"The first team have all been really welcoming to me and have made me feel like I am one of them now.

"Seeing the likes of Josh Key, Joel Randall and Alex Hartridge establish themselves last season makes me want to do the same, and even more. I just want to get on the pitch and score some goals."

Exeter City President and Director of Football and External Affairs, Julian Tagg said: “The success of our Academy and its reputation continues to go from strength to strength.

"From the support of our players' parents, their schools and the Academy staff, to the team in the 'boot room', as well as the dedication and determination of the players themselves, it is all part of a huge team effort. Additionally, what makes it so special is the support from the club and Trust boardrooms and the efforts of so many volunteers and, last but definitely not least, match days, with our fans singing 'he’s one of our own'." 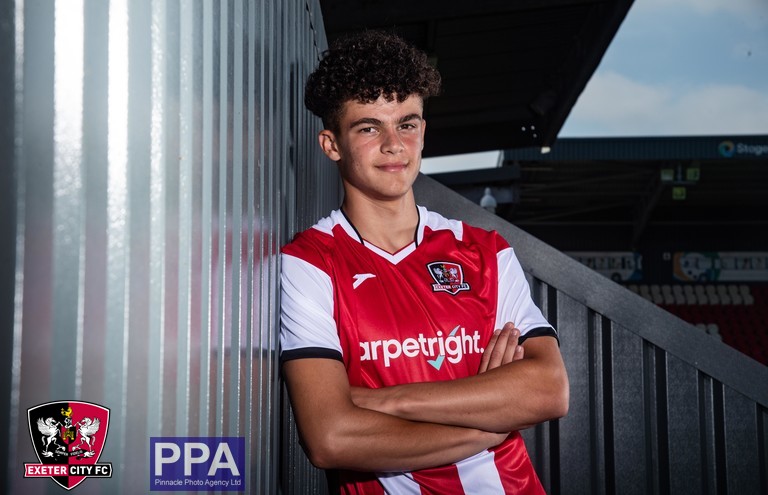 Academy operations and performance manager Arran Pugh, who oversaw Harry’s development, said: "Sonny, like Harry Lee, had interest from elsewhere, so the fact he has signed with us is fantastic for the club.

"Sonny has been with us since he was seven. He has really matured and grown in confidence socially in the last couple of months. The time he spent with the first team has been massive and the way they welcomed him into the group.

"He has played under-18 football all year and visited a number of Premier League clubs, so all these experiences have helped him grow as a player and a person.

"There aren’t too many players that you come across within the academy set up that are just natural goal scorers and Sonny certainly is just that."