Perhaps one of the more recent and famous instances of ‘one of our own’ going on to achieve success at a higher level is Matt Grimes. Currently captaining a successful club in the Championship, the 25-year-old always remembers his roots, and how his career began down in Devon.

Born in Exeter on July 15, 1995, Matt possessed plenty of promise and ability throughout his rise at the ECFC Academy. An instrumental 2012/13 season for the Grecians' Under-18s saw the young prospect rewarded with his first professional contract in April 2013 alongside goalkeeper Christy Pym.

Matt made his professional debut just a few months later when he played the full 90 minutes of City’s 2-0 victory over AFC Wimbledon. The 2013/14 campaign proved to be the midfielder’s breakthrough season, which saw him become an integral part of Paul Tisdale’s squad.

In February 2014, Tisdale described Matt as the best player he had seen come through during his tenure, particularly praising his technical ability and reading of the game.

The midfielder scored his first City goal on April 18, 2014, in a 1-1 draw at Chesterfield. Soon after, despite Matt's tender age, such was his impact on the team, he was awarded Exeter's Player of the Season.

Matt began 2014/15 in exciting form, and had netted four goals before Christmas. However, on 2nd January 2015, after 58 league appearances in total for his hometown club, he moved to Premier League outfit Swansea City for a record-breaking fee of £1.75 million. Despite leaving halfway through the season, the midfielder was still selected for League Two's PFA Team of the Year. 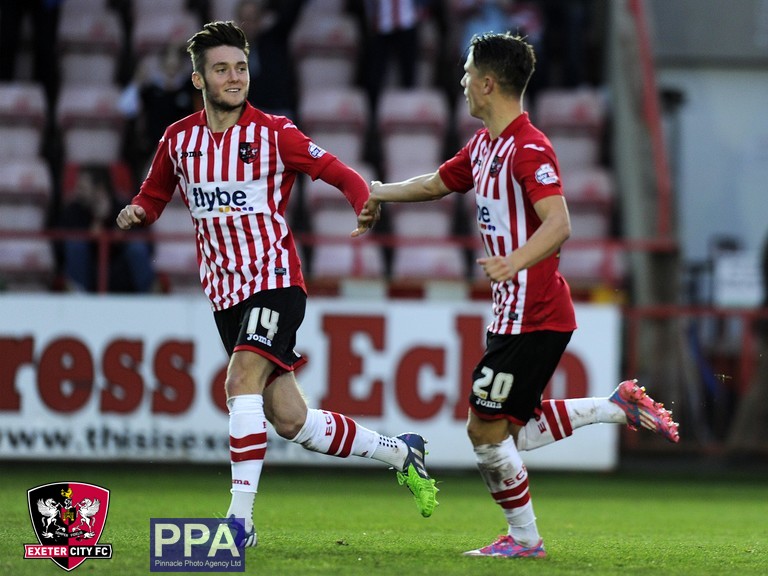 Matt was signed with the future in mind, and despite the midfielder making his Swans debut in April 2015, he enjoyed loan spells with Blackburn Rovers, Leeds United and Northampton Town during his early days at Swansea.

Following the club's relegation from the top flight in the 2017/18 season, Matt has since established himself in the Swans midfield, and was made captain under the management of Steve Cooper.

With Grimes leading the team, the Welsh outfit made it all the way to the Championship play-off final, but sadly for our former protégé, defeat to Brentford means that the Swans will have to go again this season for the chance to return to the Premier League.

Alongside his club commitments, Matt has also represented England at under-20, and under-21, level, and his rise up through the footballing ladder has certainly made him a player Exeter fans will always have an eye on.