Following the conclusion of the 2020/21 season, Exeter City’s under-18s Head Coach, Chad Gribble, expressed a sense of pride and thanks towards everyone who was involved in yet another successful campaign for the Grecians’ youth team during his round-up of the past nine months or so.

After finishing third in the Youth Alliance South West division in the first half of the season, City’s youth side went on to record a runners-up spot in this season’s one-off regional EFL Merit League, as well as perform admirably in the two adjacent cup competitions, the Youth Alliance Cup and the FA Youth Cup.

But despite all of the success the club’s Academy have experienced on the pitch throughout the year, in the coach’s summary, Gribble admitted that the decision to hand scholarships to ten members of the Under-16s squad, and see second-year scholars Jack Arthur, Jack Veale, Nelson Iseguan, Ellis Johnson and Alfie Pond all sign professional contracts was the biggest result. 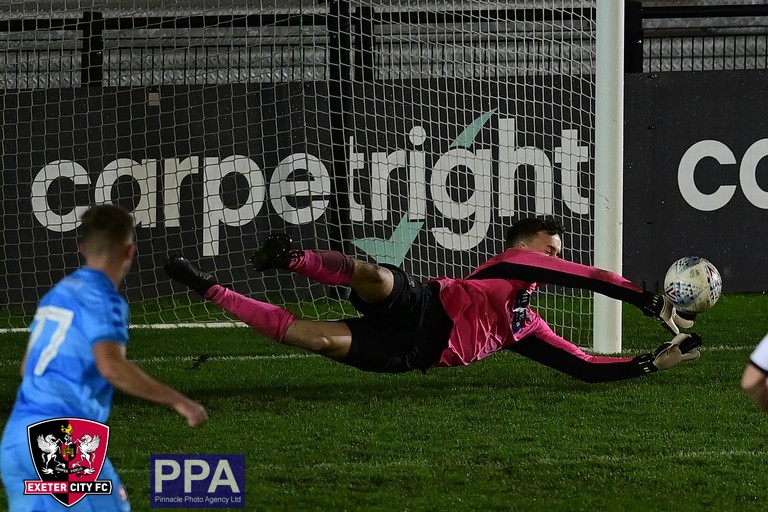 “Ultimately, at the end of all this, after talking through the various games and moments throughout the season, we can’t move away from the fact that five of the Under-18s earned professional contracts with the club, and we handed 10 scholarships out to our Under-16s. That is the highest amount of deals the Academy has handed out for several years, and away from the games and results, that is the biggest result of the season.

"Congratulations must go to all of the players for a fantastic year, and a big thank you has to go to the staff as it isn’t just me who works with them as there are a whole lot of people involved with the players and their development. Seeing these contracts handed out is definitely the proudest moment for us, alongside seeing the likes of Nelson Iseguan make his full debut. The boys who graduated last year too given game time as well, and seeing Ben Chrisene scoring for Aston Villa in the FA Youth Cup final; it is those kinds of things that make the Academy proud, and are well-earned rewards for all of the hard work, and are the real bits of icing on top of the cake.” 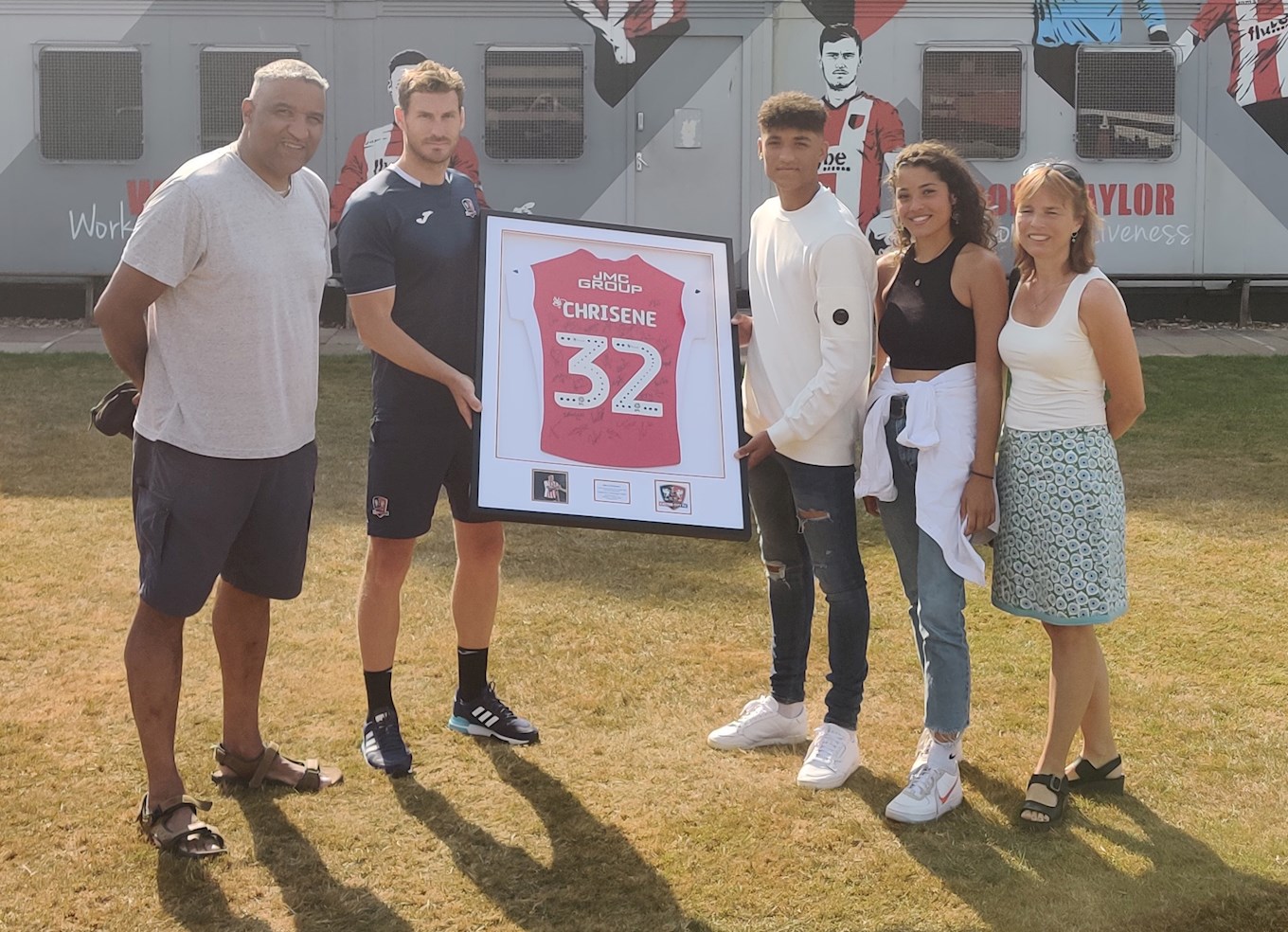 With Chrisene grabbing the headlines in the Midlands, closer to home, Gribble and his young squad focused on their pathway to success back in September when they began their quest to top the Youth Alliance South West division. Some strong runs and performances saw them towards the top end of the standings, and, after the winter break, February saw Exeter’s youngsters finish the campaign strongly to secure third place behind strong outfits Oxford United under-18s and AFC Bournemouth under-18s.

A month later, after some uncertainty around how this season’s Merit League was going to work, the Grecians kicked off their fixtures in the second half of the season with a win against rivals Plymouth Argyle under-18s, and a draw with Yeovil Town under-18s. However, their hopes of topping the table took a bit of a hit when they lost 2-1 away at Cheltenham. Gribble revealed however, there were bigger agendas and goals that took priority during the spring months.

“We had to make decisions ultimately between two things. Winning trophies versus further exposure and development for some of the players. Choosing the latter has been beneficial, and we made decisions throughout the Merit League to play one or two of the new scholars, and then introduce more as we went on. I’m extremely pleased we did that as in the long run it will be a big benefit for them, and give those players the best shot at giving them a good start next season. We had a disappointing final day when we needed to find a way to win, but the hit we took on the pitch by playing the younger players will have a far greater impact for years to come.

“There were some missed opportunities on the way. Against Yeovil, we handed a few debuts out, but we had a penalty late on which we missed, but we didn’t play well at Cheltenham. That comes down to some of the inconsistencies that you can get at youth football. This part of the season has seen some of our older players take part in some Under-23s matches played behind closed doors, and, alongside the decision to prioritise development, to take the fight for the title down to the last day where one of four could still win it, and yet still finish second, I am extremely proud how the young players stepped up.”

Alongside the Merit League, the latter stages of the FA Youth Cup and Youth Alliance Cup were being played out, with Gribble’s side competing in both. While to some it may have been a distraction, plenty of people associated with the Academy were certainly proud to see their own young players stand alongside and compete with Leicester City under-18s and Gillingham under-18s. Gribble explained that all focus shifted onto those cup ties when they came around in late March and early April.

“In the cups, we picked the best team we thought gave us the best chance in that given moment, and it was quite pleasing to see how far we got. For the FA Youth Cup, the Leicester match probably proved to be more of a distraction to the staff than to the players. A lot of thought went into how we were going to approach it. That distraction set in during the Yeovil game, and disrupted the flow of the game as a result after we went a goal down early. We worked our way back into a 2-1 lead, but changed five players with the Leicester game in mind. But thank goodness we did that, as we went toe-to-toe with them for 90+ minutes, which we probably wouldn’t have been able to do had they played for longer in the Yeovil match just a few days before.

“Again Gillingham in the Youth Alliance Cup we defended against their direct play well, but we lacked the composure on the ball that we had in other games this season. Our preparations were the same as a normal game, and we had an added incentive as we had just lost in the Merit League seven days before. Unfortunately, we just didn’t have enough on the day. I was gutted we couldn’t progress further in both the cup competitions, and I feel that was two missed opportunities for us. We just lacked that cutting edge, which, in a way has been the story of our entire season and can be the case with young players. But while they were missed opportunities, I am very proud of the players’ efforts and where we got to.”

But while the cup runs ended for Exeter by the first week of April, they ended that month in fine form with one of their most complete performances of the season against Newport County under-18s. Long gone was the disappointment of the extra-time defeat to Leicester, the penalty shoot-out knock-out by Gillingham, as well as the Merit League loss to Cheltenham, as City’s youngsters unified and produced an emphatic 4-1 victory. Gribble reflected on his fond memories of a day full of positives at the Cliff Hill Training Ground.

“In our match against Newport, I think that was the first time our younger players really impacted proceedings. Even those coming off the bench added further opportunities and assists. Mitch Beardmore got two assists, Jamie Nicholson came back from a long term injury and added quality, and then some of those individuals took that into the next game against Bristol Rovers. That was a very different game but Mitch got on the scoresheet, Alfie Clark and Gabriel Billington played well, Ed James came on and made us more solid, and Harrison King was perhaps the best player on the day. I think that was the point where we saw the work that they had done in training start to pay off.”

However, a final day defeat to Forest Green Rovers handed Plymouth Argyle under-18s the Merit League crown, and, despite all the positives displayed during the second half of the season, showed that there were still things that the younger players needed to work on. Gribble acknowledged his inexperienced squad are far from the finished article.

“There is always going to be work to do, and I fear the day when we can turn to them and say they’ve cracked it all. If we won every game in the Merit League by three goals, there would still be something that we could improve on, and some of the recent Under-23s matches have shown up areas of their game that they need to work on.

“Against Forest Green, we just didn’t have quite enough. We played ok, and there have been other occasions where we have played worse than that but won. But, the players can come away with their heads held high because they have benefitted from that experience of playing under a bit of pressure. We made the decision to play the younger players and they stepped up and almost delivered us a title. However ‘almost’ isn't quite good enough.

“We have seen the Merit League this season as an opportunity to expose the Under-16s to Under-18s football, and a chance to drip-feed those younger players to allow them to develop. It has allowed Dan Green and myself the chance to organise more Under-23s matches and reserve games to further develop the senior players of the Under-18s setup.

“When we got the news that the Merit League would be organised differently this season and done regionally we were a little disappointed because we are very fond of the traditional method. We like the overnight stays we organise, and, although it sounds strange and is a bit more difficult to organise, we enjoy the longer journeys. We like facing different types of opponent, and that is what we discovered when we played Gillingham. We hadn’t come up against that type of football this season so it was a good test for our players. They finished mid-table in their league this year and that is why it would’ve been brilliant to play the likes of Peterborough this year. Quite often teams from that part of the country have higher physical attributes and it demands more athleticism from you. But we have managed to work our way around that with strategic thinking in our Merit League games this year, and, despite everything that has gone on, we have managed to make things work in our own way.”

It is that Exeter way that has given Grecian supporters, once again, the cause for optimism towards the ECFC Academy ahead of the 2021/22 season. The players and coaches have now entered their summer breaks, where rest and recovery will be the number one goal, however, their holiday periods won’t be lasting too long as Gribble and his squad will reconvene on June 28th to start the cycle once again for another year.