It was heartbreak for Exeter City Women’s Development side on Friday evening, as Liverton United won a penalty shootout after an absorbing contest had finished 1-1 after ninety minutes.

With several hundred supporters choosing live football over the start of the European Championships, the game started with plenty of goalmouth action. Liverton United, with a superior physicality and experience to their side, were first to create a chance.

Rhiannon Dumper in the City goal had to show good handling from an early cross, before being forced quickly from her line following a City mistake, as they attempted to play from defence. Dumper would be at her best from a resulting Liverton corner, she brilliantly got a hand to a header that looked destined for goal, an intervention that resulted in the ball hitting the post before being cleared by the City defence.

With the young Grecians surviving the early scare, Sam Sharpe’s side were starting to put their own passages of play together. A pass into the feet of Kelsey Salter saw her split the defence with a precise through ball for Chloe Harris, Harris was never going to be caught and she calmly slotted the ball past Ayres for the lead. 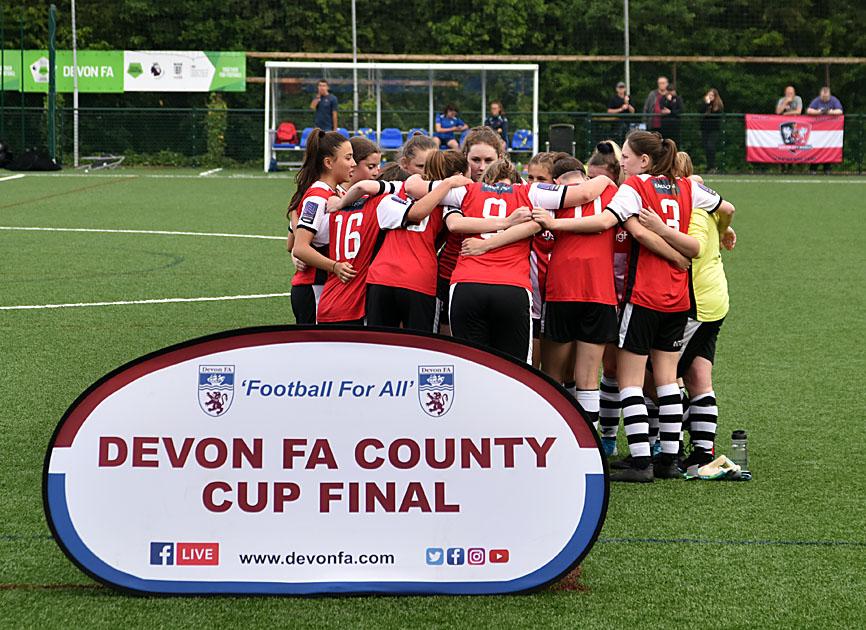 The City defence would again be put under pressure, the clever interchanges between Dymond and Drummond were leading to opportunities, but both Rowan Karkeek and Ellie Sill were dealing with the threat well. The willing running of Salter would lead to City having a further opportunity, her persistence won possession and neat play with Sophie Skilton led to a shot that was saved by Ayres in the United goal.

Liverton’s physicality was now taking hold of the tie, a string of corners and the threat posed by the long throw of Katie Sawyer was offering a steady flow of chances. The goal would eventually come from a corner minutes before half time, the initial cross was not cleared by the City defence and the ball was bundled over the line for the equaliser. All square at the interval.

The second half began how the first half had ended, Liverton upping the pressure, but City holding firm. Tash Harvey was moved into central defence to try and counter the aerial threat, whilst Phoebe Durkin was excelling in central midfield with a string of crucial interceptions. Dumper was again at her best in preventing United from taking the lead. Ellie Sill had provided excellent cover once more in the City backline, however, as the ball was recycled back into the penalty area, Dumper denied a goal with a sharp near post save from the shot.

A string of substitutions and tiring bodies led to a scrappy spell, City’s young defence had withstood the pressure admirably and the Grecians were now starting to find a way back into the game and finishing the stronger. Antonia Nash worked a chance from a throw, but it failed to have the required power to test Ayres. Substitute Ella Maguire was adding some energy to City’s play and as the game neared the conclusion it was all about trying to find that one golden chance.

That chance would come in stoppage time, but sadly for City, it was for Liverton. Drummond, who’s good technical play, coupled with her turn of pace, had caused problems all evening, raced clear and fired low into the bottom corner. It looked set to be a late winner, but somehow Dumper got down to turn the ball around the post. City’s keeper had been outstanding all evening and deserved the headline of taking this tie to penalties.

Penalty conversions from Skilton and Durkin, accompanied by a further save from Dumper, were not enough as Liverton scored three of their four efforts and took the Cup Final.