After a goalless 90 minutes, Jay rocketed in an 100th minute opener and Atangana stole in at the near post four minutes later. In the second half of extra time, the Captain added his second to seal passage to play Cambridge United in the Second Round.

Bradford’s extra time frustration was added further as Lee Angol was shown a second yellow, to condemn Derek Adams’ side to defeat. 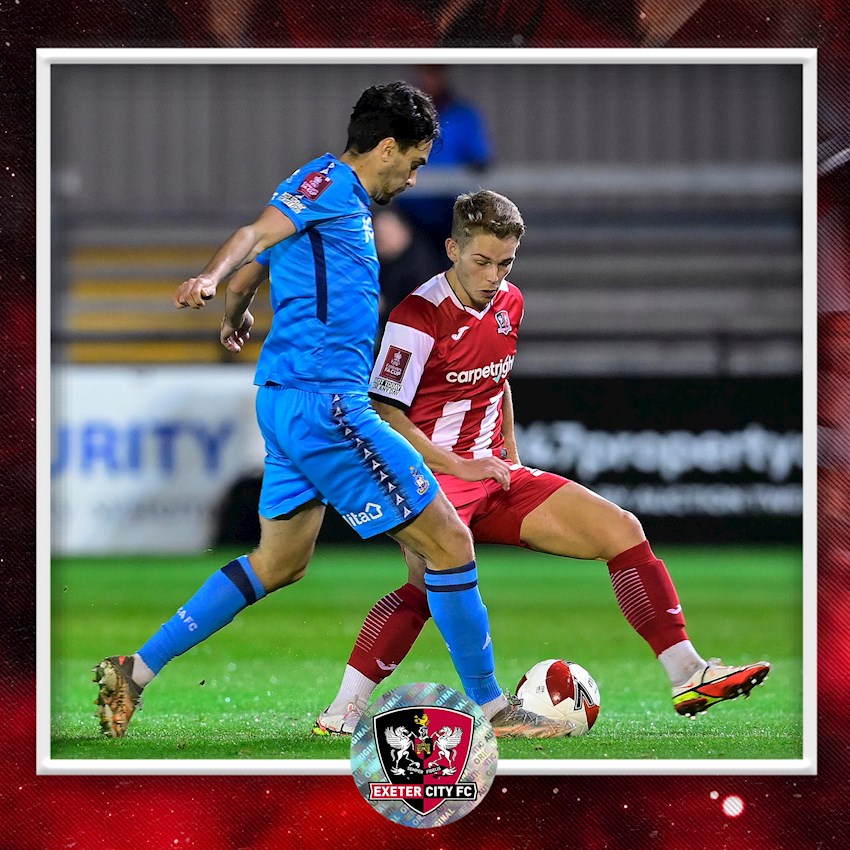 There were four changes for City for the Cup with a switch to a back four. Josh Coley and Owura Edwards had their chance to impress under the lights- as the Grecians kicked toward the Big Bank in the first half.

The strong Bradford side started livelier. Charles Vernam, who impressed in the first game, hit a half volley into the travelling fans.

Sam Nombe could’ve put City ahead in the tenth minute. The number 10 shrugged off his marker and drove into the box. A pull back was seemingly the better option, and the Bantams were able to divert for a wasted corner.

Owura Edwards was unlucky not to have opened his account for Exeter. Nombe raced onto a delightful ball through from Archie Collins and sent the ball across the box for Edwards to tap in. The celebrations were cut short however, as the assistant’s flag was brandished.

Vernam went for goal after quarter of an hour, but Cam Dawson was in no trouble getting down to claim.

In a first half where ideas seemed hard to come by, Archie Collins side-footed from the edge of the box, just for the ball to loop up and over.

Elliot Watt almost found a bit of magic with a free-kick from about 30 yards out. His right-footed effort swung narrowly wide of Dawson’s goal.

Edwards look the likeliest for Exeter to open the scoring before the break. Coley’s deep ball evaded all the Bantams’ defenders. Owura lurked at the far post but his diving header was saved by Richard O’Donnell.

The first opportunity of the second half came for the visitors. Levi Sutton burst through one-on-one after being sent through by Theo Robinson.

For all the world it looked like the Bantams would take the lead but Cam Dawson was the man-on-hand to keep the scores level, with a low save to his right. Bradford skimmed another one wide of the mark as Derek Adams’ side looked promising.

The visitors had a half-hearted shout for a penalty as Levi Sutton went down in the area, though Sweeney’s strong challenge was fair and the ball was won. 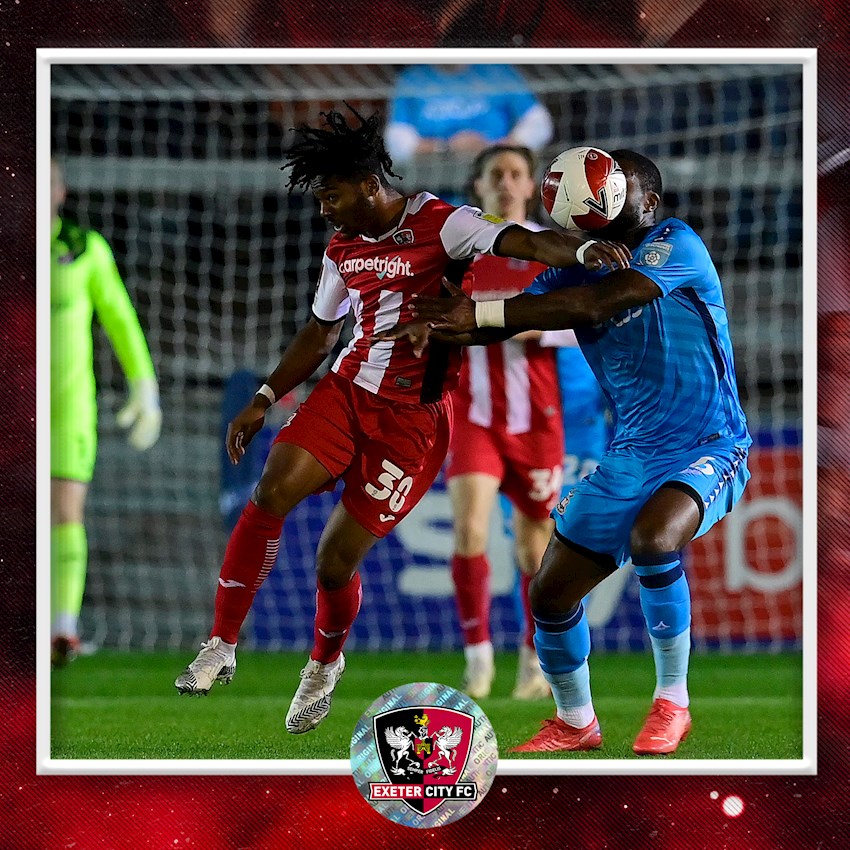 Handbags were on show midway through the second half as Lee Angol reacted to fouling Alex Hartridge himself. After a melee that Wrestlemania will be proud of, as both players and Colin Daniel came out with names in the book.

Colin Daniel almost blasted City in front. The game had gotten a little scrappy but City kept the ball alive on the edge of the box. Tim Dieng rolled the ball to Daniel whose piledriver was over the upright. That would be his last action and his replacement Jake Caprice had a similar effort but with far less conviction.

Nigel Atangana, introduced a minute before time, had a strike at goal but only tested the ducking abilities of the Bradford fans.

The Bantams almost stole it at the death of injury time. Angol snuck through but Dawson palmed it away. Bradford retrieved the loose ball and laid the ball toward Elliot Watt. In full momentum Watt’s electric effort crashed off the crossbar and the game could only drift into extra time.

The atmosphere was beginning to rise around SJP as both teams began to feel the passion of the FA Cup. Exeter used the booming Big Bank to their advantage and through Matt Jay found themselves in front, cueing euphoria. 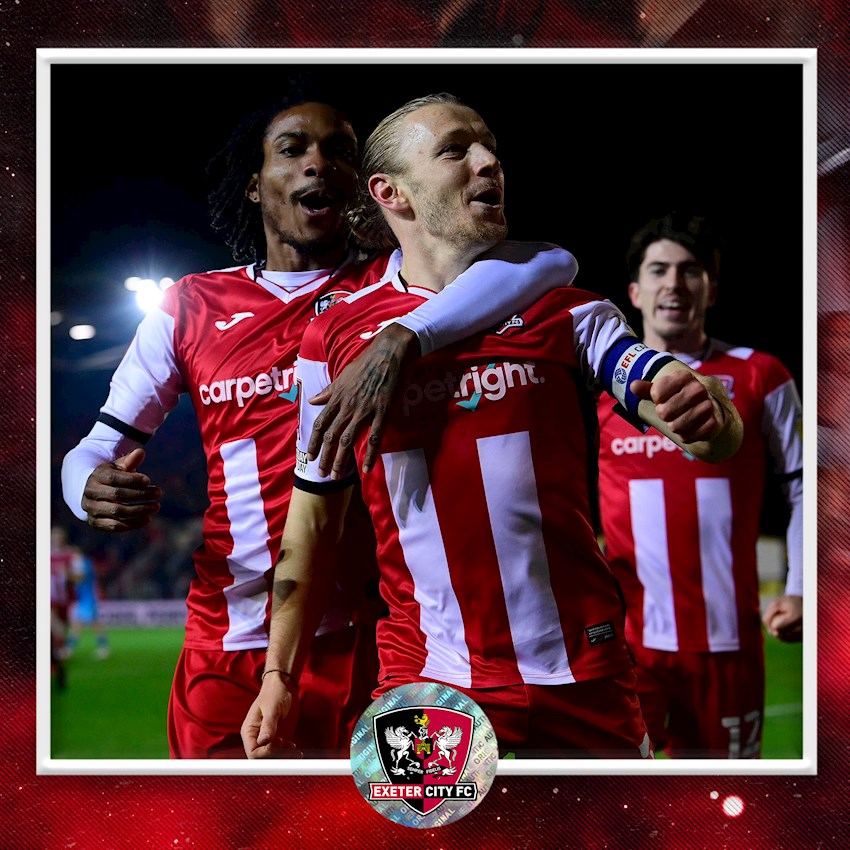 Harry Kite’s fair aggression in midfield won two fifty-fifty challenges and set away the captain. In a two-on-one counter-attack, with Jevani Brown for company, Jay went for goal and took the roof off the net and stadium in tandem!

And the passage was all but sealed by Nigel Atangana just a minute later. City with the momentum played the ball wide to Jake Caprice. A drilled ball into the box was met by the Frenchman and jubilation ensued around EX4.

Things went from bad to worse for Derek Adams’ side. Lee Angol who had been precariously hovering on a yellow card for some time clattered into Harry Kite and was given his marching orders.

In the second half of extra time, MJ showed his class and quality as he poked home a third. The impact subs Brown and Jay combined again via a gorgeous backheel and the skipped slid home another. 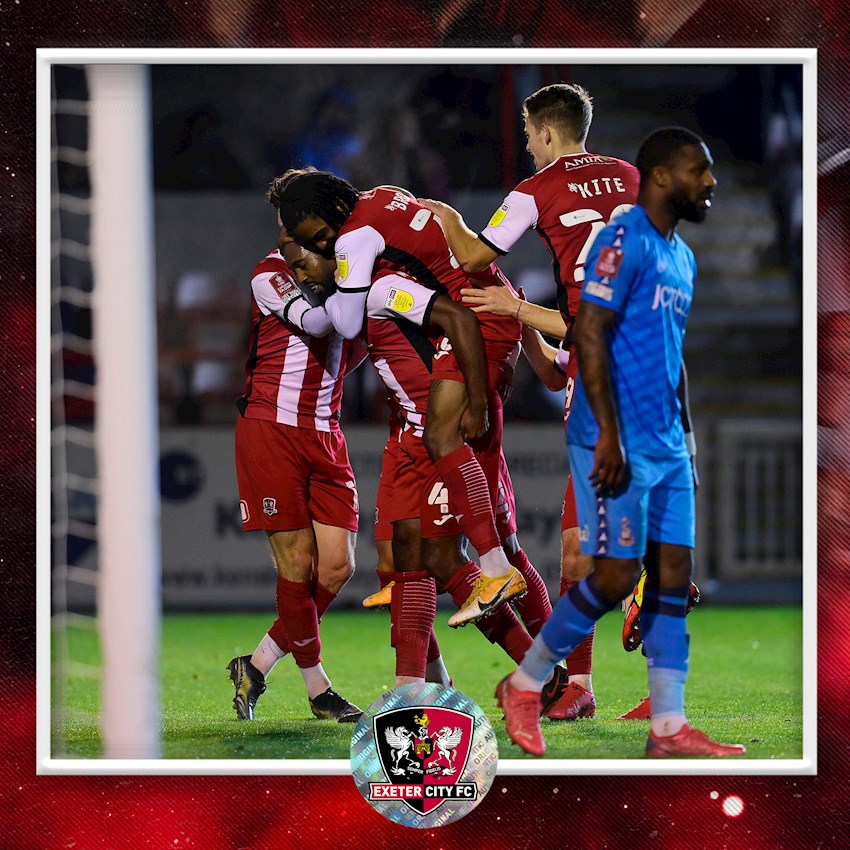 He almost grabbed his hat trick from the next attack as City began to finally enjoy themselves. The post on this occasion was the only thing between Jay and his third.

The Grecians saw out the victory and will travel to the Abbey Stadium to play Cambridge United in the Second Round.