This season marks the 150th anniversary of the Emirates FA Cup, the world’s oldest and most prestigious domestic cup competition.

As City prepare for their trip to Bradford City, we delve into the depths of the Grecian Archive to celebrate Exeter’s involvement in the famous knock-out tournament.

Exeter’s first ever fixture in the FA Cup coincides with the club’s best ever result. On October 3, 1908, six goals from James Bell helped the Grecians to a 14-0 victory over Weymouth in the First Qualifying Round of the Cup, followed by a 10-1 Replay win over Longfleet St Mary. City would go on to the equivalent of the Second Round that year being knocked out by the old enemies down the road Plymouth Argyle in front of 20,000 fans at Home Park.

In the 1910/11 campaign the Grecians would be struggling for home advantage as the St James Park pitch was scarcely up to standard, unlike today’s carpet. Exeter would play their home games at the old County Ground for cup competition and despite being drawn at Home to Nelson FC in the 5th Qualifying Round and at home against Burnley in the First Round proper, both games were played away due to both oppositions rejecting the SJP pitch. 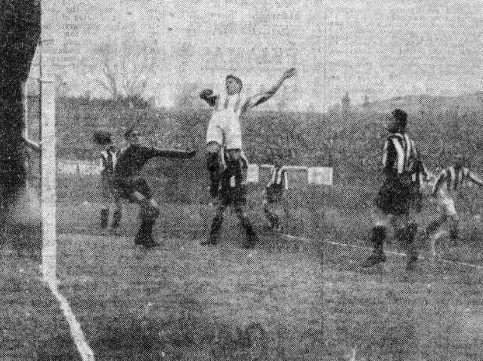 The 1929 season saw us come up against the first ‘superpower’ club as the Grecians drew Leeds United in the Third Round. 13,500 fans crammed into the Park to watch the Reds hold the first division side to a 1-1 draw. The replay was routine for Leeds though in next two years, Exeter would be back in the big time again.

Momentum built from the Leeds cup run was swiftly swept under the carpet by Walsall the year before but Billy McDevitt’s men weren’t to be deterred. An away 3-0 victory against Northfleet Town was the catalyst to our record cup run. Percy Varco is synonymous with this campaign and opened his account of five in the Second Round against Coventry City. The sky blues had held the Grecians at the Park but a 2-1 victory in the Replay sent City through to R3.

Varco again found the net, complimented by William Armfield and Harold Houghton as the Grecians saw off the Rams from Derby. Heads began to turn when Percy and Harold were on the scoresheet yet again on January 24 as Bury were the next side to taste the Reds fire, setting up a fixture with those old foes from Leeds United.

This was already the furthest Exeter had gone in the Cup and the 19,130 fans inside St James Park knew something special was happening. Having come so close to beating Leeds two years prior, Armfield netted twice and George Purcell added gloss and the demons of Elland Road were diminished and City were in the hat for Round 6. 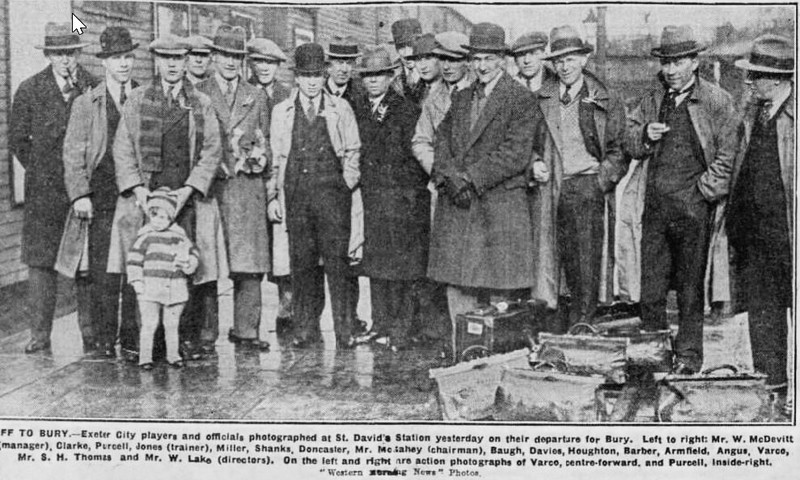 Whether Exeter had ever played in front of 50,000 people prior to February 28, 1931, that’s for further investigation but the baying Black Cat crowd were silenced, when Harry Houghton’s goal earned Exeter a Sixth Round Replay against Sunderland.

Exeter City became the most successful third division team in the FA competition that year. With this success inevitably came a regional spike in interest. Consequently, City's replay against Sunderland on the 4th March 1931 was screened in the King's Hall Picture House in St Thomas, as the city centre experienced gridlock from the sheer mass of fans rushing to St James Park to see the game.

To this day, the game against Sunderland drew the largest attendance in the history of St James Park, standing at 21,013 spectators. To this day, the campaign is celebrated through the 1931 Fund who each year pay the wages of a first team player. This year Josh Coley is the latest recipient of the 31 shirt. 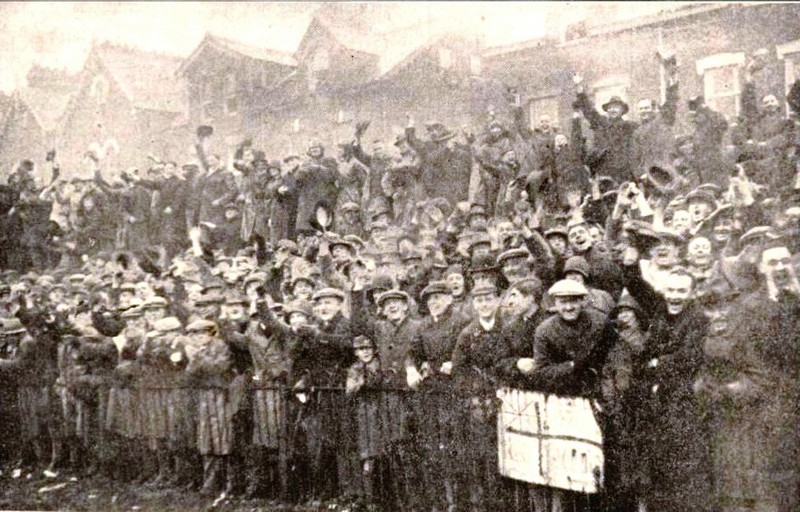 What the beauty of the FA Cup brings for sides lower down the pyramid is potential fixtures against some of the biggest clubs in the country, if not the World. Though Exeter have never really set the competition alight throughout the 20th Century, the Grecians have had their fair share of Big Game fixtures.

In the 1937 season, Exeter gained their next big scalp in the Cup when Leicester City felt the wrath of Jack English’s City side as the midlands side were out-foxed by Roderick Williams’ two goals, in a 3-1 triumph for the Reds. Williams would go on to score 29 goals in his only season at EX4 including seven in this Cup campaign. 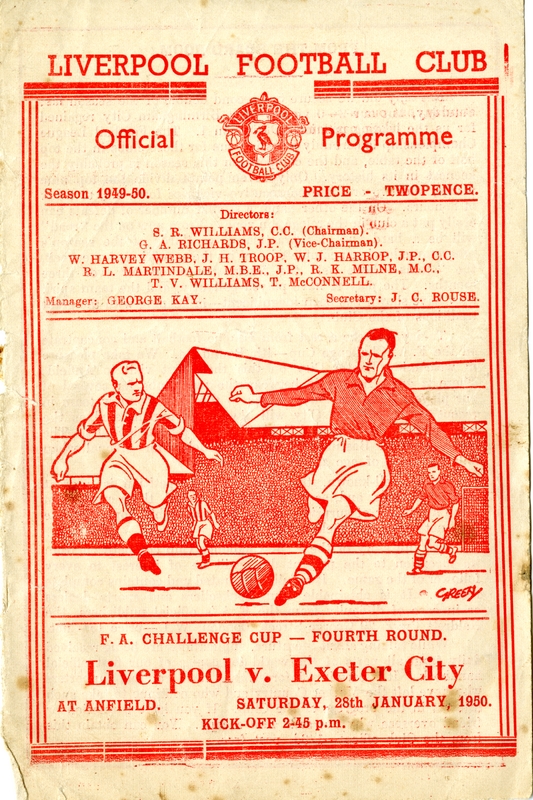 In 1950, Exeter returned to the Fourth Round of the Major Trophy after Nuneaton Borough were swept away to set-up the first meeting with five times First Division winners Liverpool. The Anfield club showed their class and prestige as they ran out comfortable 3-1 winners in Merseyside.

A year later Chelsea would visit the Park for the first and only time when a 1-1 draw took a Round 4 game to a replay at Stamford Bridge. The Grecians wouldn’t have another Hollywood tie until January 1969 when European Champions Manchester United came to town.

The star-studded Busby Babes turned up at St James Park boasting a starting eleven including Nobby Stiles, Bobby Charlton, Denis Law and a certain George Best and amazingly Exeter went ahead! Alan Banks’ deft header nestled beyond Alex Stepney to set up a giant killing. Alas the Red Devils summoned the spirit that saw off Benfica at Wembley the season before John Fitzpatrick, John Newman and Brian Kidd earned United’s passage to Round 4.

City are still yet to go further than the Sixth Round of the World’s oldest cup competition though this year was arguably City’s most famous run to date. Little did the supporters that turned up for the Leatherhead Round One game believe what was to come but as a 5-0 win, spearheaded by club record scorer Tony Kellow, a storm was brewing for Exeter’s FA Cup destiny.

Success against Millwall and a mowing of Maidstone Town earned The Grecians a spot in the hat for Round Four. First Division Leicester City were drawn for Exeter and a trip to the National Forest was on the cards for the Reds of Devon. A 1-1 draw brought the Foxes to the City and Tony Kellow reached a new level of deity with a brilliant hat trick to see off the opposition. 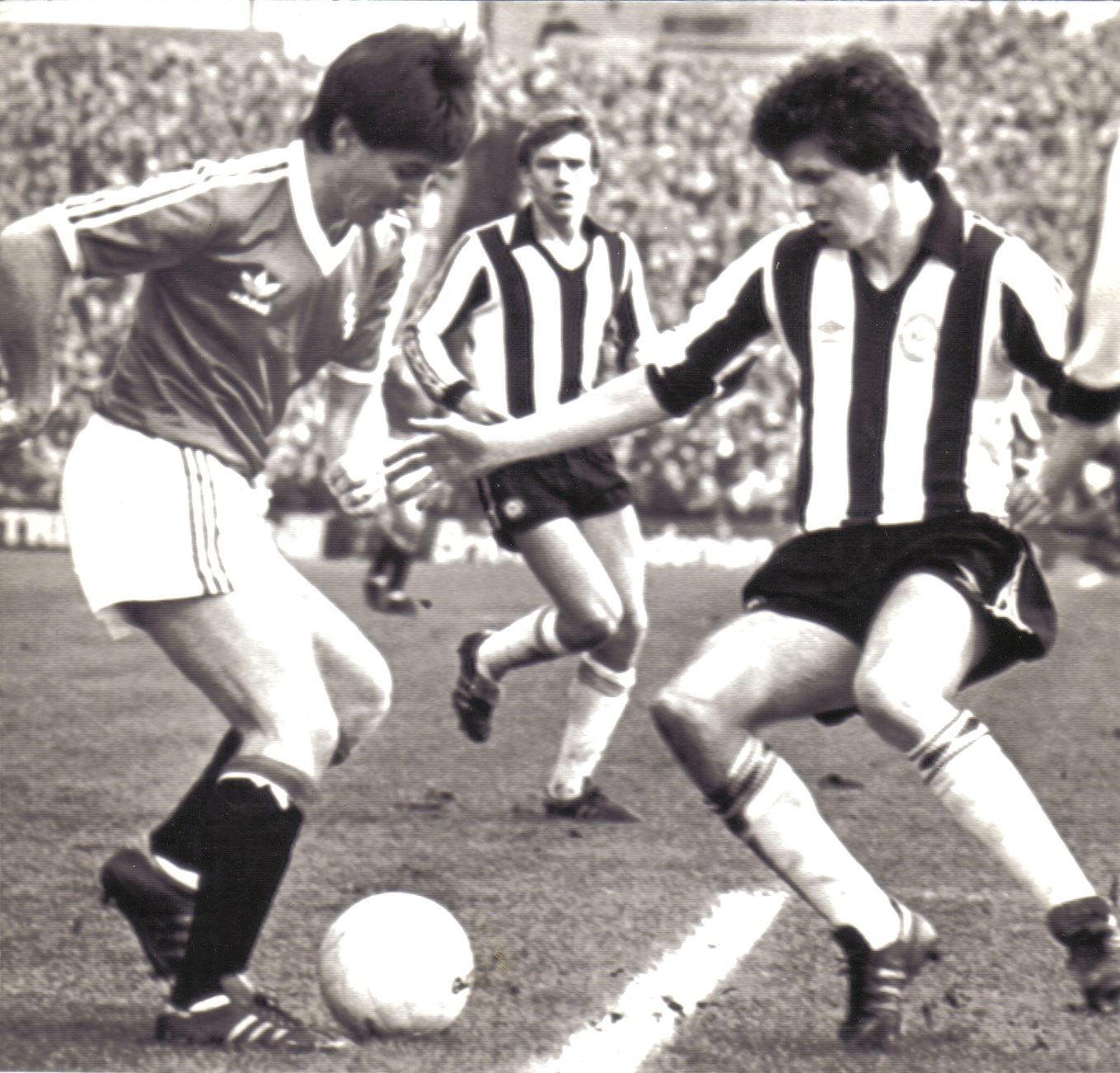 A trip to ‘the other’ St James Park followed for Exeter and another score draw against the Magpies sent the TV cameras to EX4 with history beckoning. Nearly 18,000 fans were crammed into the Cowshed; packed into the Big Bank; and wedged into the Grandstand and were treated to four famous goals. Peter Hatch’s fortunate corner opened the scoring, but Ian Pearson’s acrobatics doubled the score. Peter Rogers put City three to the good before half time before his namesake Martyn rounded off the scoring with two minutes to play.

The banana skin of Exeter City took a Tottenham Hotspur side flooded with international experience to break the form, but the ‘champagne football’ City had played in the 1980/81 campaign will never be forgotten by those in Devon that day.

It’s no secret the importance the fixtures fell kindly for Exeter City at the turn of the century. Upon relegation to the Conference in 2003, Exeter once more had to qualify for the First Round proper of the Cup. The first season back in non-league Exeter were unable to overcome Gravesend and Northfleet (Now Ebbsfleet) on penalties in the 4th Qualifying Round.

The year later though Exeter City would write another chapter in the topsy-turvy recent history. Jake Edwards and Sean Devine saw off Braintree as Exeter returned to Round One. One of the Club’s greatest ever FA Cup goals came in Round Two when ‘Happy as Larry’ Dean Moxey found the net from the halfway line setting up a potential Premier League tie.

It had been a turbulent few years at EX4 but as Tony Cascarino drew ball number 64 out of the Bowl, the Grecians were heading to Old Trafford. Paul Scholes, Alan Smith and Cristiano Ronaldo were among the players unable to break through Paul Jones’ brilliant resilience at the Theatre of Dreams and the non-league club held the Premier League giants.

Despite Wayne Rooney and Ronaldo’s goals at the Park in the Replay the moment of the tie came as live on the BBC, City fullback and one of our own Scott Hiley nutmegged the future five time Ballon D’or winner. 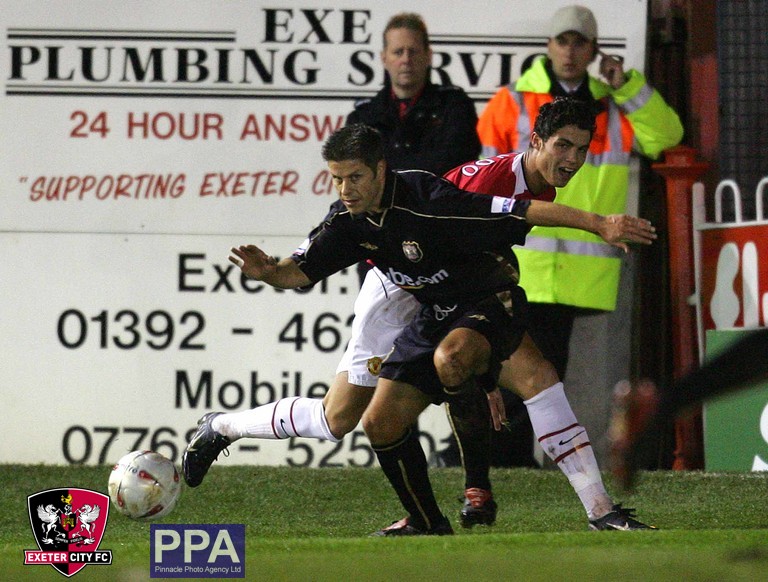 The real legacy of the tie was the financial gain for the struggling City as the old cliché “Magic of the Cup” shone through, Exeter were given the monetary lifeline to survive and return to the Football League.

It’s not all been plain sailing in the FA Cup and some honourable mentions to Curzon Ashton, Warrington Town and Hartlepool United being among the non-league sides to have humbled City in recent years.

Returning to some joy, the 2015/16 season also gave Exeter fans some jubilation. Wins against Didcot Town and Port Vale set up another Behemoth fixture against Jurgen Klopp’s Liverpool. The Red’s changed side were held to a 2-2 draw at St James Park in a game the Grecians could have may should have won. Goals from Tom Nichols and Lee Holmes’ direct corner brought City to Anfield where the Kop was out-sung by the plucky visitors from Devon despite the 3-0 scoreline.

Since, Exeter haven’t made any real inroads in recent years but stand-out victories against Gillingham and a dramatic tie against Forest Green Rovers has kept the Cup alive in this part of Devon.

This Saturday, Exeter play Bradford City for the very first time in the competition and are looking to reach the Second Round for the third consecutive season- a feat that hasn’t happened since the early 90’s, in a bid to add to the long history of Exeter City, in the Emirates FA Cup.

Where were you in 1980/81? How did you celebrate the draw against Manchester United? What are your favourite memories of City in the Emirates FA Cup? Let us know across our socials!