League action returns to St James Park as Oldham Athletic are the latest side to come to Devon.

Ahead of the game, here’s a lowdown on the Latics.

This season Oldham have started in slow form and currently sit in the bottom three going into Saturday’s affair.

This will be the eighteenth time Keith Curle has managed against Exeter City which is more than any other manager has mustered against City. The 57-year-old won three England caps in 1992 whilst leading the back line for Manchester City.

He departed Northampton mid-way through last season with the Cobblers struggling on their League One return and walked through the proverbial revolving door at Oldham, replacing Harry Kewell.

The third highest football stadium in the Football League (After the Hawthorns and Vale Park), Boundary Park sits at over 500ft above sea level, but the record it does hold is that being the coldest football ground in the country, earning the nickname “Ice Station Zebra”. With Saturday’s weather set to be in the minuses, being able to watch at home on iFollow, does not seem such a bad option.

With four goals and two assists in this term, the midfielder has been the ignition for everything going forward in Keith Curle’s side. The Congo international has been a silky addition to Boundary Park after signing from Tsarko Selo Sofia in October. 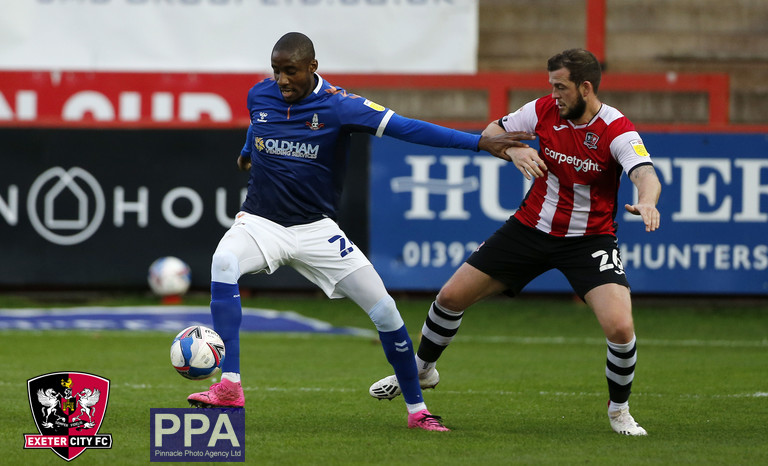 Since the very first meeting in a 3-0 FA Cup win for City in 1937, there have only been 32 fixtures since. Exeter have had the better of the Latics though and the two clubs have shared 100 goals between them. City have found the net 54 times compared to Oldham’s 46.

The Latics held on to secure the first win in Keith Curle’s reign, as Jack Sparkes’ second half strike proved little consolation.