City had gone behind through Ashley Nadesan’s first half header. The game changed before the break with Nadesan involved again, being adjudged to have dived inside the Exeter box to earn an early bath for a second bookable offence.

A resurgent Grecians found themselves level through Matt Jay’s thunderbolt ten minutes into the second half, and the visitors completed the come-back two minutes later with Atangana’s close range header. 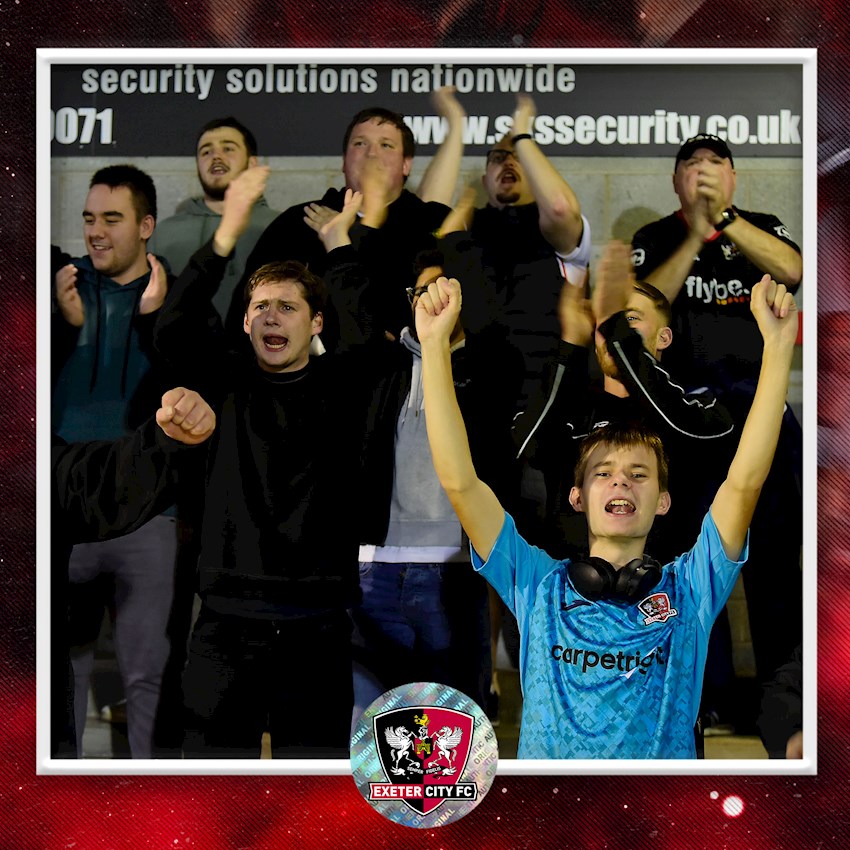 Nombe notched his sixth goal in as many games in the 89th minute, as he edges closer to David Wheeler’s consecutive record- but more importantly ensuring the Devon side left Sussex with all three points.

Four changes were named by Matt Taylor with Jake Caprice, Nigel Atangana, Kyle Taylor and George Ray all reinstated to the starting line-up as the Grecians switched to a back three.

Crawley flashed the first shot wide in the opening exchanges, A corner was recovered a the back post by George Francomb, who sent a high ball to the back stick. Tony Craig almost got too much on it as his left-footed volley went wide.

City were looking to capitalise from a blustery evening, but it was on the deck they first opened Crawly up. Jake Caprice beat two men down the left-hand side, but his low cross was well retrieved by Glenn Morris- the Town keeper.

The first twenty minutes was a real stop start affair as both teams tussled for any control. Archie Collins had the brightest chance, heading a Caprice cross safely into Morris’ mitts.

Without any real momentum going in the game, Crawley found a soft opener.

Cameron Dawson was caught in two minds after a seemingly innocuous ball forward. Kwesi Appiah beat Dawson to the ball and just about kept it in-play. His deep ball into the middle was met by the unmarked Ashley Nadesan who headed into an empty net, despite Cam’s efforts to get back across. 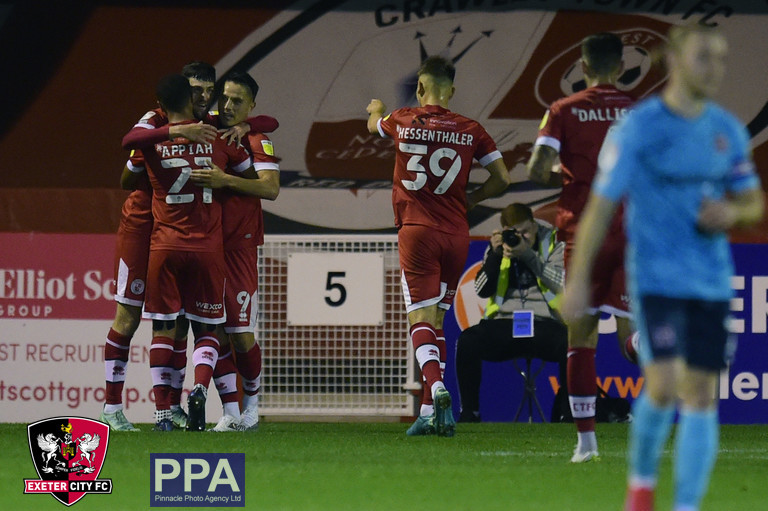 Dawson showed more confidence with Crawley’s next attack. Tom Nichols turned on the edge of the box, but The Grecian shot stopper was equal to the former City striker’s effort. Dawson again had to scramble to another Nichols daisy-cutter as Crawley took the game by the scruff of the neck.

If one piece of luck could spur City back into the game, it would come in heart-in-mouth circumstances. Nigel Atangana’s loose back pass put Dawson in a heap of trouble. Ashley Nadesan raced onto it, rounded the keeper and went down.

As City fans behind the goal watched behind their hands, referee James Oldham pointed away from the penalty spot, and with Nadesan already on a booking, had no choice but to send off the Crawley striker.

In a scrappy end to the half, both teams were lucky to go into the break further handicapped. George Ray was adjudged to have fouled Tony Craig following a City corner.

Whatever was said between the pair led to a Fury-Wilder reconstruction, and for some unknown reason, the referee opted to book Nigel Atangana and Jake Hessenhalter- two players not remotely involved in the incident or the afters? Answers on a postcard please.

The break gave City a chance to regroup and kicking towards the excellent Grecian army in the second half, found a gear in the second. Josh Key began to get a little more space down the right and was able to find a few balls into the box, that Crawley looked shaky in clearing.

Up the other end though, the ten men managed to scare City with Appiah, more central now firing wide.

The game needed a bit of magic and MY WORD did Matt Jay provide that.

Achie Collins found the skipper 25-yards from goal. Full of confidence after his goal on Saturday, Jay let fly. The ball dipped, swerved, turned and spun and almost tore the net apart. 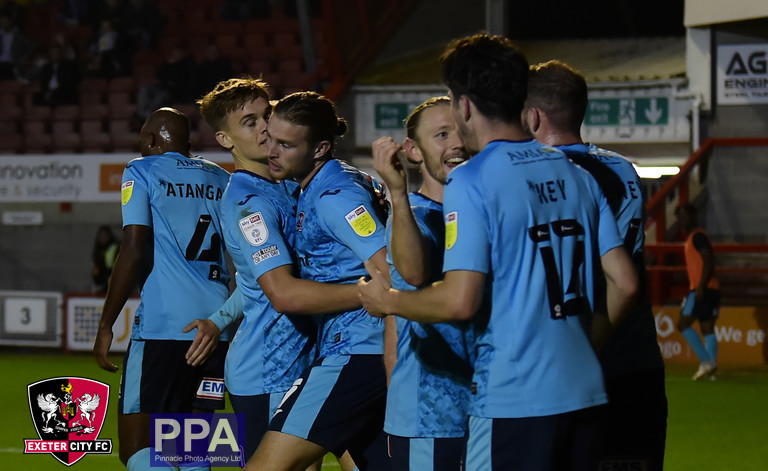 One brings two and the Grecians made the extra man count from the next attack. Key again delivering from the right. Sam Nombe was so close to scoring himself as his beautifully dinked header hit the inside of the post. Nigel Atangana was the quickest to react to send the City fans into ecstasy!

Sam Nombe could have, maybe should have made it three. The Crawley defender misjudge a ball and Nombe was able to venture into the Town half. In his current form, a shot on target would be the least you’d expect, but the City number 10 sailed his left-footed strike high and wide.

Crawley were searching in vain for an equaliser and rarely threatened the City goal, with just a few tame crosses for the Grecians to deal with.

Nombe almost made the points safe with ten minutes to play. The City man rocketed an attempt just inside the 18-yard area. How much Norris saw of it remains to be seen, but the ball ricocheted of his chest and away. 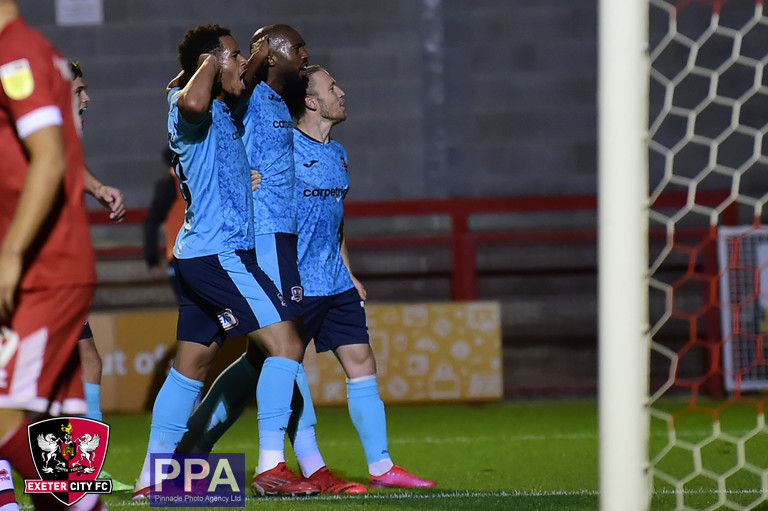 Could you write that man off though? As we edged towards injury time Nombe sealed the deal and secured the victory.

As the man down Crawley tired acres of space opened up in midfield. Tim Dieng drov forward and played the ball wide to Key. The wing-back cut inside onto his left and hooked a ball goalward. Norris done well to the first chance but who was following in? Same story. Six in Six.

There was still once more chance for Dieng who looped one over the bar but the travelling 360 City supporters weren’t too bothered, as the referee condemned Crawley with the final whistle.

City stretch their unbeaten run to 11 nowand go into Saturday’s exchange with Mansfield on the back of a hard fought, but deserved victory on the road.