One of Our Own Harry Kite has signed a new deal with the club, extending his commitment to the Grecians until 2024.

21-year-old Kite broke into the City first team within the last two season's and has already played an influential part in this campaign, scoring his first Football League goal in our 4-1 demolition of Bristol Rovers in August, adding to his first two senior goals accrued in last season's Papa John's Trophy group stages. His 2021/22 season so far has seen his feature ten times, most recently in our 2-2 draw at Cheltenham Town.

Crediton born Kite progressed through the academy from under-9s and signed professional terms at Exeter City in February 2018. 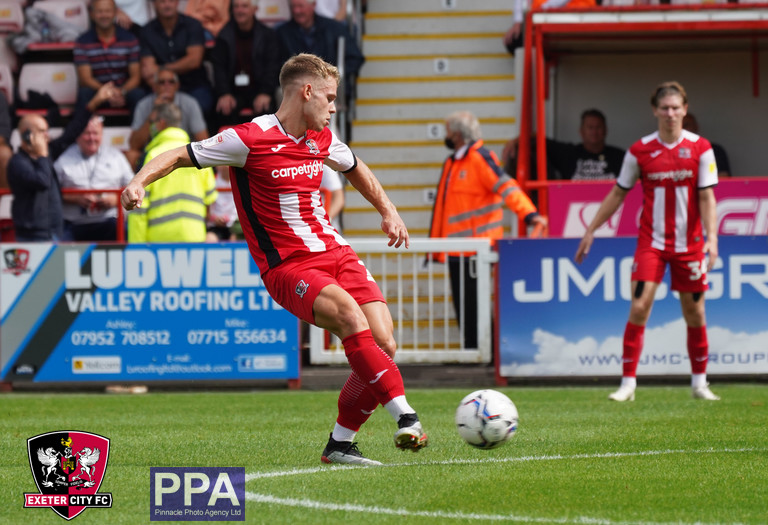 He made his first-team debut for the Grecians when he came on as a first-half substitute during City's 3-1 defeat to Yeovil Town in a Checkatrade Trophy match in August 2017.

Harry's growth into a first team regular was aided by two important loan spells, first at Dorchester Town before a switch to Taunton Town.

Kite is delighted to have signed the new deal.

"I'm really happy to commit my future until 2024 and hopefully I can keep progressing at this club," he said.

"I don't feel like there is a better club for me to progress my career at, and to keep on getting better at.

"The deal shows that the faith that the manager has in me as a player and I want to be able to repay him in the future with good performances.

"It was a very easy decision. It's a great club to be at as a young professional - it was a no brainer really.

"I've had opportunities at League Two level this season already and its left me hungry for more. I cannot praise everyone at the club high enough for helping me come through the academy, and it's because of them that I've these chances.

"I owe so much to all the different coaches, but also to my parents because they gave up a lot to drive me to training for all thos years."