Exeter City U23 suffered a second consecutive 3-2 defeat in their Premier League Cup group stage as they were beaten by West Ham United at their Rush Green Training Ground.

The Grecians had led twice in the match through Nelson Iseguan and Josh Coley, but the Hammers fought back to score two late goals to seal their first win of the group stage and leave City still searching for theirs.

Dan Green's side could have led inside the first 30 seconds when Colin Daniel teed up Coley for a header, but it was a simple enough save for Hammers stopper Brian Kinnear. Iseguan had Kinnear on his toes again when his cross almost sailed all the way into the far corner, forcing him to tip the ball out for a corner.

City's early pressure eventually paid off when it was Iseguan who opened the scoring. It was the hard work of Sonny Cox that put City in the lead as he drifted out to the right, cut inside, before clipping a wonderful cross into the six yard box for Iseguan to poke home.

That strike saw West Ham click into action and their first big chance. After a penalty shout was turned down by the referee, Emmanuel Longelo teed up Freddie Potts for an effort, but big Cheick Diabate was there to block the shot.

Diabate was the hero once again not long after as Dan Chesters wriggled through four defenders before dinking the ball over Harry Lee, only for the City defender to hook the ball off the line.

However, Diabate was then penalised for a foul in the area which gifted the Hammers to chance to level the scores from the spot. Harrison Ashby stepped up to send Lee the wrong way, and it was all square going into the break.

Coley was impressing for the Grecians and just a few minutes into the second period he was once again testing Kinnear as he flicked a throw in over the defender before drilling the ball towards goal, only for the Scottish goalkeeper to push it aside.

Kamarai Swyer was brought on by the home side and he was soon creating chances for the Hammers as he teed up Longelo, but great work from Jack Veale ensure the ball stayed away from Lee's goalmouth.

As the game to-and-froed, it was the Grecians who found the next goal, and it was the one that Coley's hard work had deserved. It was Callum Rowe who found the forward with a floating pass between the two defenders, allowing Coley a ferocious volley in off the underside of the bar for his first goal in Exeter City colours. 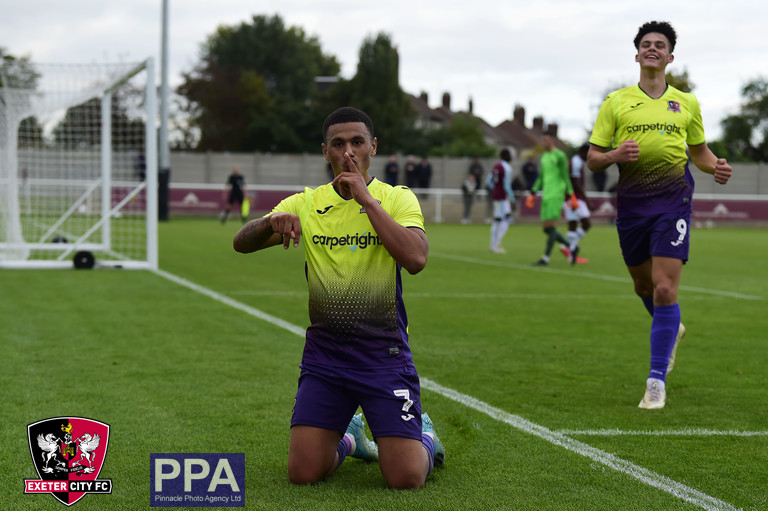 West Ham continued though to pepper the City penalty area and there was a sense at Rush Green that it was only a matter of time for the Hammers found their second goal. It came with four minutes of normal time remaining, as Ashby stood up a cross for a mass of Claret and Blue bodies attacking the area. Brazilian midfielder Bernardo Rosa got the crucial touch to turn the ball home.

As the clock struck 90 minutes, worse was to come for the Grecians as the Londoners dealt them the Hammer blow. Longelo had been causing problems all game and it was his mazy run down the left that caught City out. He played the ball back to the edge of the area for Swyer, who took a couple of touches before firing low past Lee to win the game late on.

City are next in action in the Premier League Cup when they face Swansea City away on 30th November.