Exeter City’s Under-18s advanced into round two of the FA Youth Cup following a 4-0 victory over Bristol Rovers on a cold night at the Memorial Stadium.

The Grecians broke the deadlock in just the third minute when Gabriel Billington capitalised on a goalkeeping error to force the ball in from close range.

With the visitors in control for large parts in the first half, Charlie Hanson added an Exeter second just past the half-hour mark following Sonny Cox’s imaginative and precise cross.

Despite a resurgent Gas side after the restart, Cox extended the City lead with a real poacher’s goal on 59 minutes, before the forward bagged his second in the final eight minutes to seal his team’s place in the second round of the prestigious youth competition. 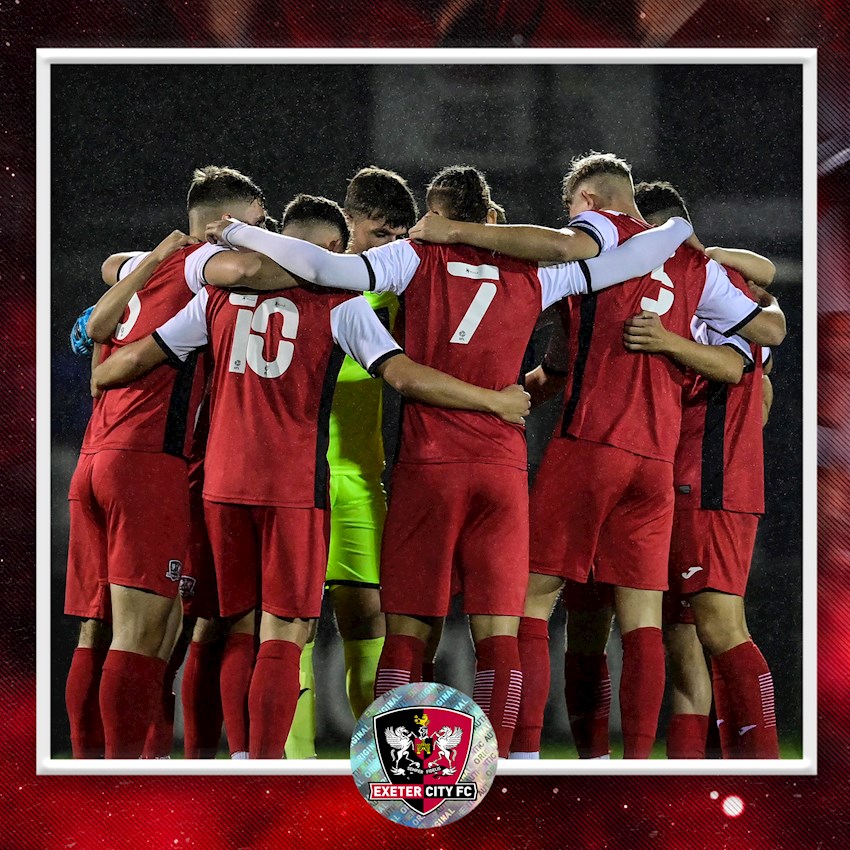 ECFC Under-18s Head Coach, Chad Gribble, made three changes to the team that beat Forest Green Rovers U18s at the weekend with Harry Lee, Harrison King, and Charlie Hanson all coming into the starting XI.

But it was City’s Cox who created the first real opportunity just a few minutes into the contest when he cut in from the right side and fired at goal with his left foot, however the ball was comfortably held by Rovers goalkeeper Airidas Vilinauskas.

The shot-stopper quickly went from hero to zero however just a minute later when Exeter’s early ascendency resulted in them winning a flurry of corners in a matter of moments. From the second set-piece, Mitch Beardmore’s corner was spilt by Vilinauskas, and on hand, Billington tucked the ball home to give his side the early lead. 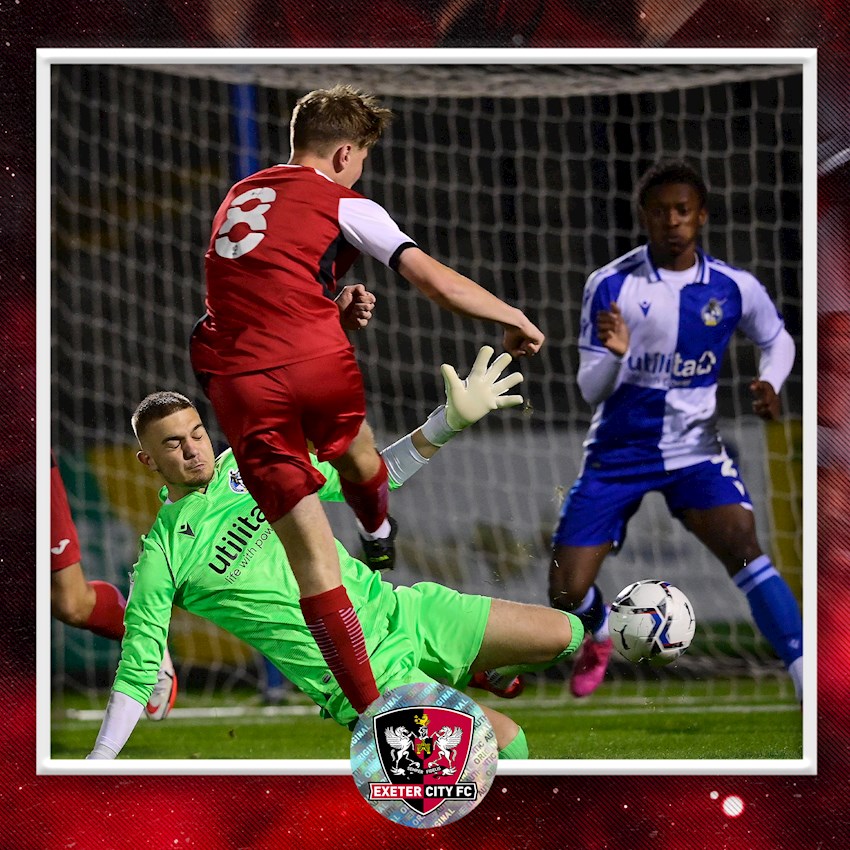 The away side really looked the team on top during any dead-ball situation early on, and with 10 minutes on the clock, Alfie Pond sent a volley goalwards from another corner, however the effort was blocked and eventually cleared away from danger.

Hanson and Cox looked to cause the Gas defence plenty of problems with their pace and movement, and both attackers tried their luck with speculative efforts, but by the time the tie reached 18 minutes, it remained a one-goal game.

However, it wasn’t for the lack of effort from Gribble’s forward players, and they ripped apart the Bristol defence down their left side with combination play from Max Edgecombe and Beardmore. A pass inside found Cox, and his lay back to Michael Lilley saw the midfielder shoot from the edge of the 18-yard box. Vilinauskas parried the ball away, and the defence managed to clear their lines before Hanson could capitalise on the loose ball.

A spell of pressure came from the hosts after they won themselves a corner at the midpoint of the first period. An ambitious attempt from Jerry Lawrence looked to test Lee in between the Grecians’ sticks, however the ball was blocked on route to goal.

That was a rare bright moment for the Pirates however, and in the 32nd minute, Exeter’s youngsters asserted their dominance even further with their second goal of the night. Superb play from Cox down the left saw him cross a ball across the face to unmarked Hanson, and on the stretch he diverted the ball past a stricken ‘keeper to double their advantage. 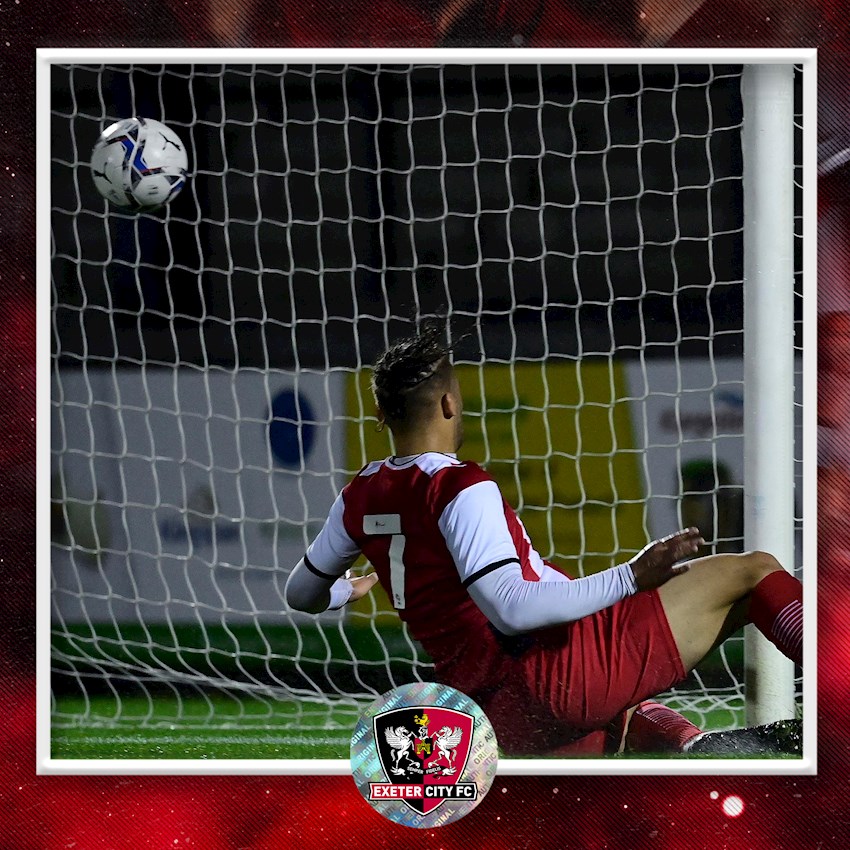 The visitors looked to add to their tally before half-time, and defender Alfie Pond went close with a glancing a header after 39 minutes, while Cox scuffed a decent chance into Vilinauskas’ hands just a few moments later.

But ultimately, despite the four added minutes at the end of the half, it remained 2-0 as the teams headed into the changing rooms for the interval.

The opening stages of the second 45 minutes were a more balanced contest, and in truth, the first real opportunity fell to Rovers following Andreas Smolka’s neat footwork down the right flank. His pullback to the other side led to a low strike at Lee’s goal, but the goalie smothered the ball comfortably.

But for all of the Bristol outfit’s endeavour, their efforts suffered a setback when Gribble’s men added to their goal tally just before the hour mark. After recycling play on the right side through substitute Joe Wragg, he and Harrison King worked an opening for a shot. Vilinauskas parried the resulting effort, but on hand, Cox displayed a real striker’s instinct to tap home for 3-0. 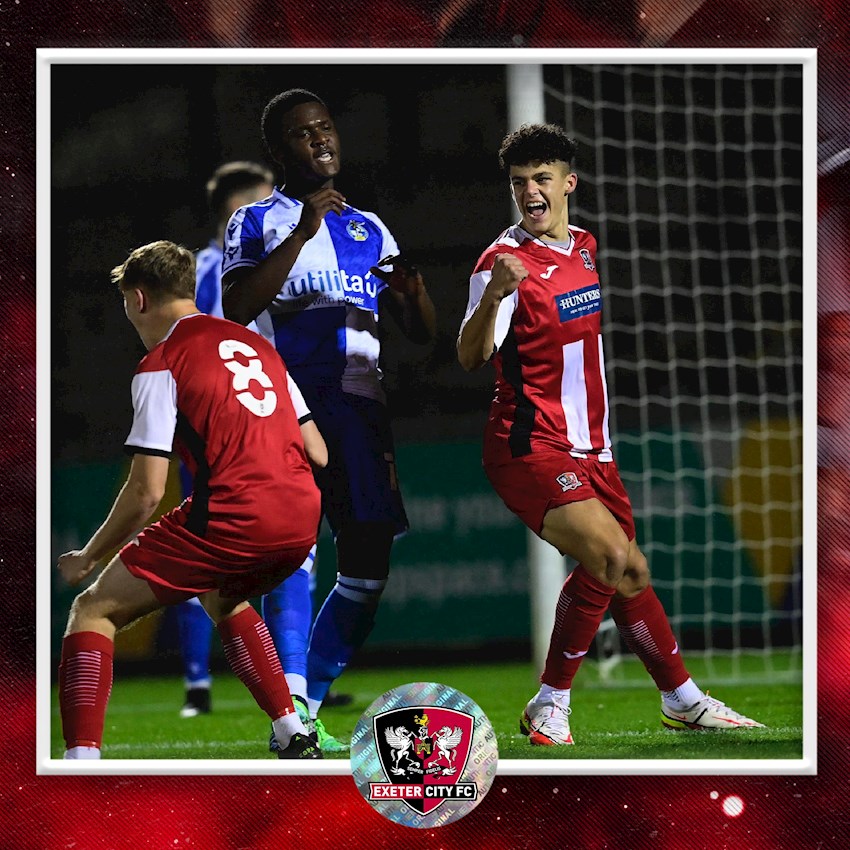 That setback saw the home side throw more bodies forward as an avenue ti get back into the contest. With tea came some promising play down the right wing in the 70th minute, which ultimately led to a smart ball inside to find the untracked run of replacement Owen Brain. The midfielder fired in a low shot, however Lee stayed big and his right foot blocked the effort and sent the ball to safety.

Cox continued to be a threat up at the other end of the pitch, and his steely determination and physicality almost saw him open a chance up for him to score the night’s fourth goal, however some desperate defending saw the ball cleared out for a corner with less than 15 minutes remaining on the clock. 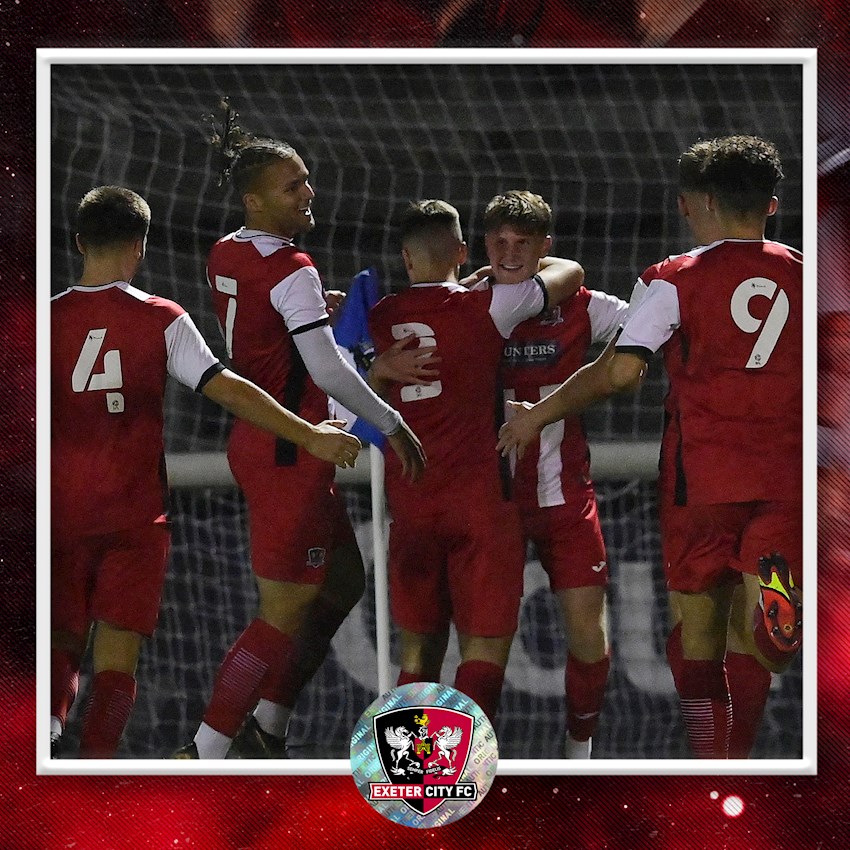 The Gas continued to push, and they were almost in on goal following Max Edgecombe’s lapse in concentration, but that was just one example of Gribble’s men being forced into mistakes.

However, in the attacking third, they always looked a danger, and like their first strike, they netted their fourth from a corner; Beardmore’s curled centre located Cox, and he rose unchallenged to thump his header home to make it a four goal deficit in the 82nd minute.

Wragg’s long-range attempt stung the hands of Vilinauskas as the tie approached injury time, and, with the final kick of the game, Cox almost helped himself to a second assist of the night when his low ball into the danger area was tipped away by the Rovers shot-stopper.

But ultimately Gribble and his players had to settle for four goals, and when referee George Enever blew for full-time, that confirmed the Exeter name will be once again in the hat for the round two of the FA Youth Cup.