Tim Dieng and Sam Nombe were on the scoresheet as Exeter City were held to an entertaining draw against a spirited Walsall.

The Grecians grabbed an early lead through Dieng’s downward header, before Walsall dominated most of the first half and George Miller’s penalty found them level.

After the break Matt Jay missed a penalty of his own, as his effort crashed off the underside of the bar and away.

But City did retake the lead on the hour, as Sam Nombe netted for the third game running before thorn-in-the-side Miller restored parity with a header.

In a tale of Matt Taylors, the Exeter City variant opted for one alteration to his starting line-up. Harry Kite returned to the squad for the unavailable Kyle… umm… Taylor.

Before kick-off, St James Park remembered the late Kevin Hack with a minute's applause. Thank you, Kevin for your years of service at Exeter City and in the Community Trust.

And it was the start Super Kev would have dreamt of as it only took five minutes for City to break through!

From the first attack, Jevani Brown sprung a high Walsall line. The striker calmy rolled the ball back to Pierce Sweeney to deliver. Tim Dieng clambered highest to head down, one bounce, off the inside of the post, one-nil City.

The Frenchman’s best scoring season prior to joining Exeter was four. Already this year, Dieng now has three. 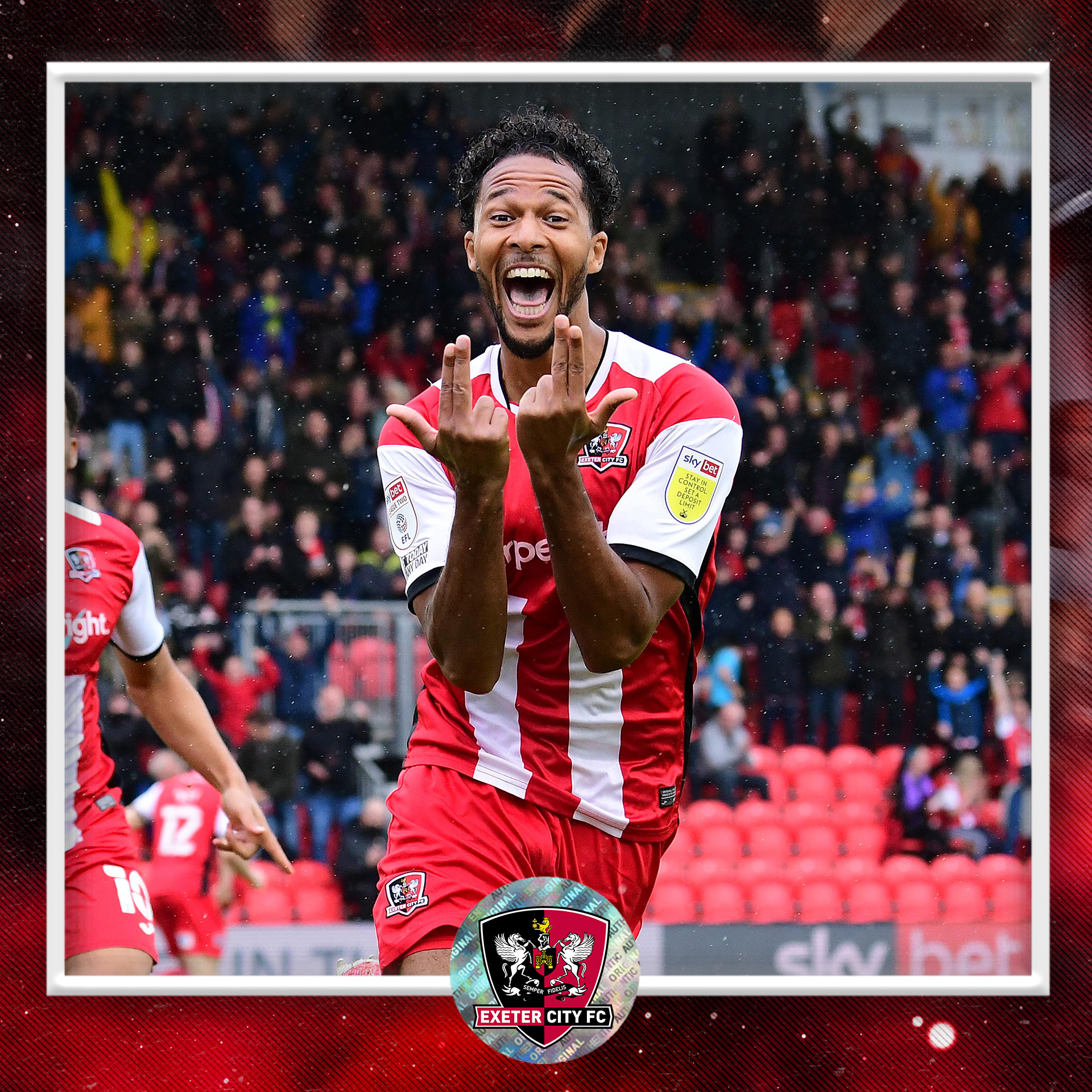 City with their tails up carved out another chance a minute later. Brown was set free through the middle, but with options left and right, opted to shoot but it was comfortable for Carl Rushworth in the Walsall goal.

The visitors came close on 11 minutes. Josh Key brought down his opponent on the edge of the box. Manny Monthe delivered the free kick and the ball whizzed wide of Cam Dawson’s far post.

And Walsall had a gilt-edged chance to get level. George Miller should have capitalised on a George Ray slip. Dawson done well to make himself big, and Miller flashed it wide.

City could have doubled their lead on 24 minutes.

An almighty scramble in the Grecians penalty area was cleared by Sweeney and Harry Kite led the counter charge. He played Brown, to Matt Jay. He waited for Jake Caprice’s overlap, but Miller tracked back and halted the chance. 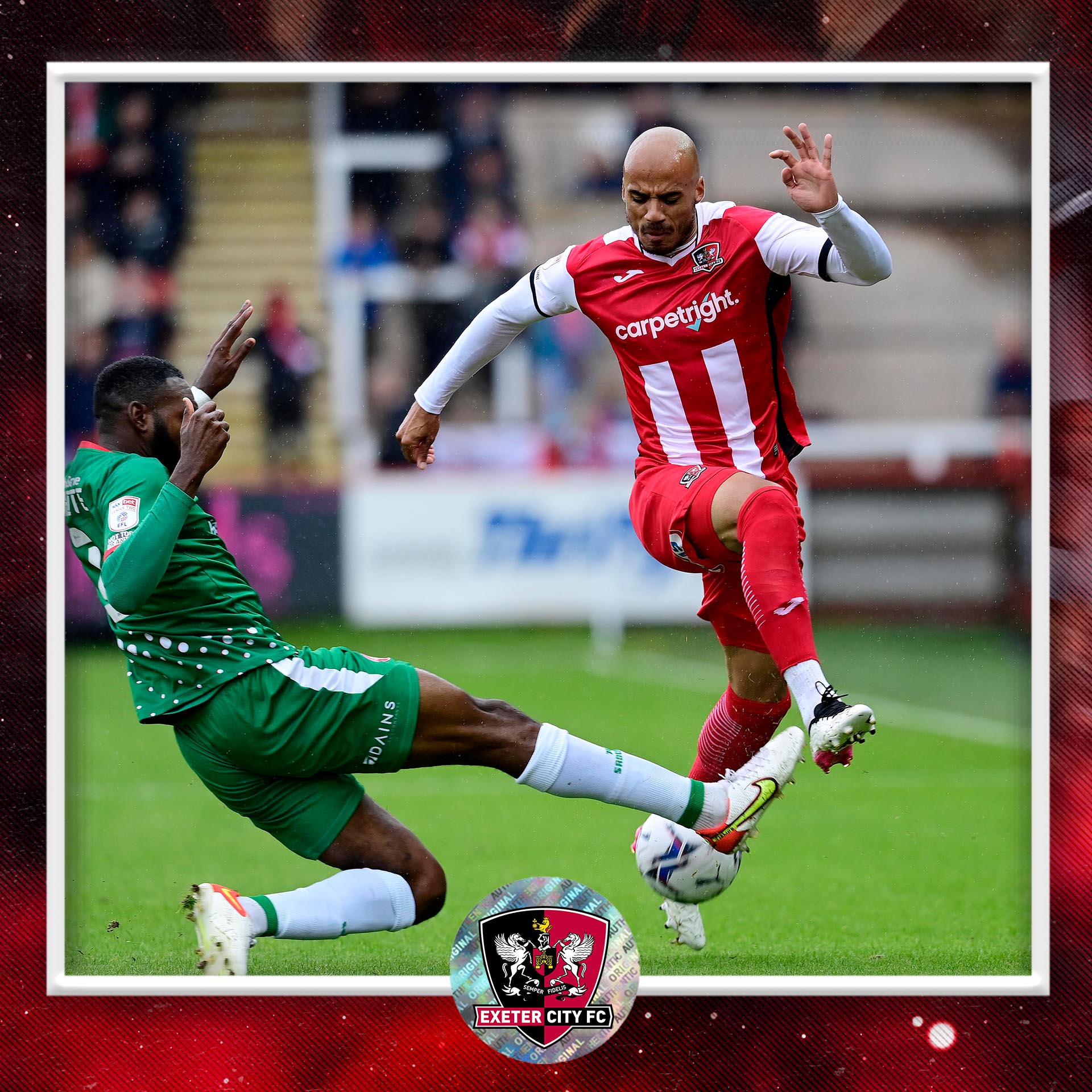 From the corner, Rollin Menayesse sliced a ball high and wide. MJ kept the ball alive and found Dieng again, but an important intervention from Kiernan Phillips was needed.

Phillips almost turned provider for Walsall on 28 minutes. Sweeney misjudged a pass, for Phillips to retrieve. His ball in was on a tuppence for Miller, who could only flick wide.

Sweeney made amends soon after. Emmanuel Osadebe burst into the City box and there was the defender to sweep away on the slide. As pressure mounted on the Grecians, the melee from the resulting corner was gratefully turned into Dawson’s arms.

The visitors were very much aggrieved after 33 minutes. Captain Joss Labadie was felled in the box but to no agreement from Mr Wright- the man in black.

The referee’s conscience probably played a part in his next decision. Harry Kite made a strong but fair challenge inside the box, but this time Peter Wright did point to the spot. George Miller smashed home for a deserved equaliser for the Saddlers.

Cam Dawson had to be alert with a couple minutes left of the half. Hayden White went for goal at range. The City keeper spilled the initial effort but swiftly reacted to collect the loose ball.

Straight after the break, City had a penalty of their own. Tim Dieng was tripped in the area and the linesman guided the referee to the decision. Matt Jay stepped up and uncharacteristically blasted it against the cross bar.

Exeter were the more progressive of the two sides after the break and got their reward on the hour!

The ball was bouncing around the midfield before dropping to Jevani Brown. The City number 20 looped a delicious pass over the top of the Walsall back line. The blistering Sam Nombe ran onto it, shrugged off his defender and rolled the ball into the corner for his third goal in as many consecutive games. Man. In. Form. 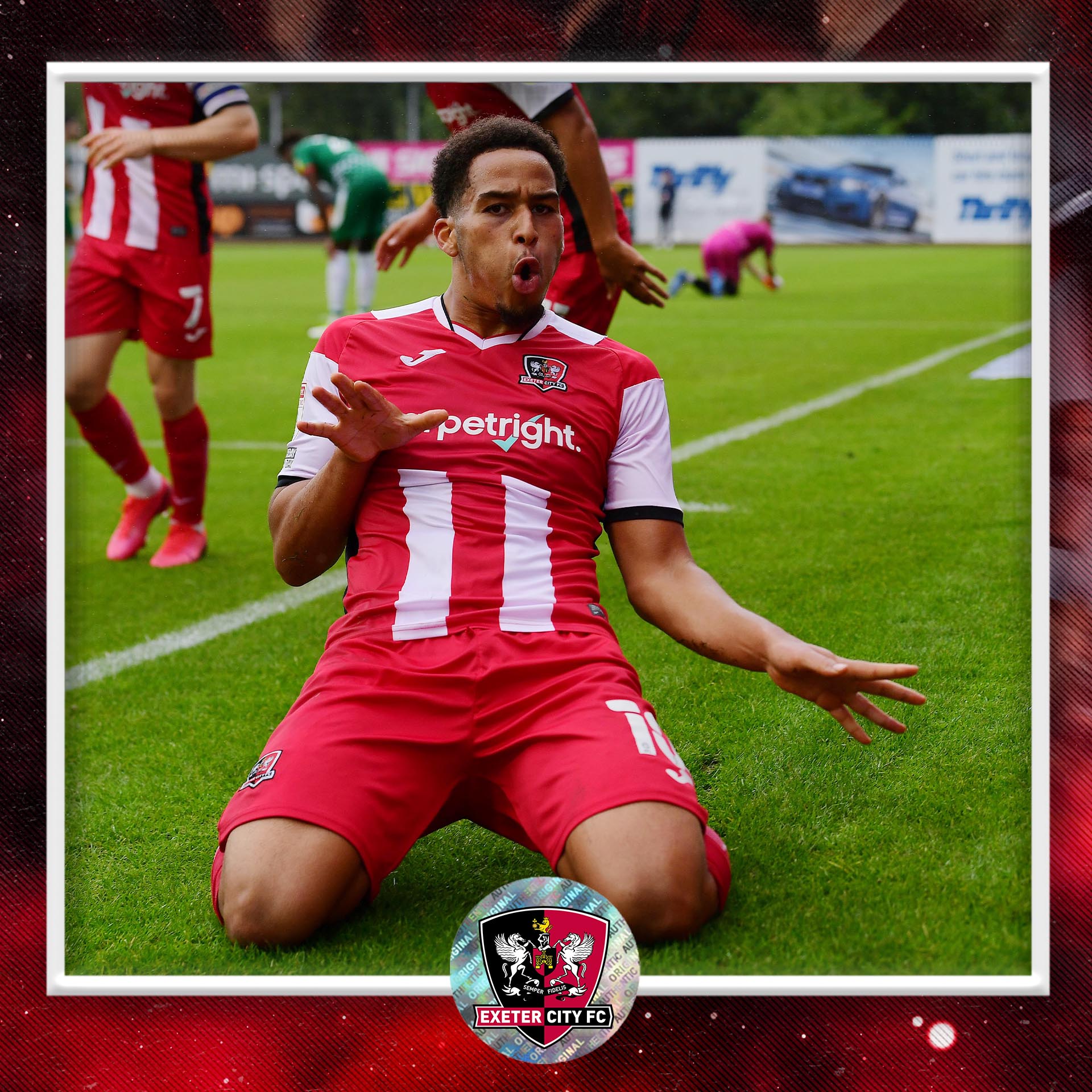 The lead only lasted ten minutes.

Menayesee was given far too much time to cross on the right-hand side. George Miller dispatched the header in front of the travelling 370 Saddlers.

Moving into the last ten minutes, both Matt Taylors looked to the bench. Nigel Atangana was introduced and layed a lovely ball forward to Nombe. A bit of trickery allowed room for Brown on the edge to receive the ball and shoot, but Rushworth was equal to it.

Nombe burst through a minute later after being set away by Archie Collins, but contrary to the belief of the IP Office Stand he could only find the side-netting.

Ultimately, neither side found a winner and shared the points on a wet and windy day in Devon. Next up for City is a trip to Cheltenham in the Papa John’s Trophy on Tuesday night.