Exeter City Women return to National League action this weekend as they head to Wiltshire to face Swindon Town, a high profile fixture due to the game being moved to the County Ground, home of Swindon’s mens team.

Jamie Davies’ Town have had a difficult start to the season, drawing three, losing two and winning one of their opening six league games. A trio of draws in the first three games was by no means a poor start with points registered against AFC Bournemouth, Cheltenham Town and Portishead, all teams who are faring well this season. That was a solid base on which the team could build. Sadly for Town, defeats on the road at Chesham and Larkhall Athletic would come either side of the team’s one win at Poole Town.

Whilst points have been hard to come by, all of Davies’ team’s matches have been competitive. Defeats have been narrow and, despite facing some of the League’s best opposition, only nine goals have been conceded, a defensive record comparable to the top three in the division. Goals have been the main issue, only six so far, bottom side Poole Town the only team with fewer. However, recent County Cup and FA Cup ties have given chance to build goal scoring confidence, big victories over Marlborough Town and Longwell Green provided twenty three goals over the two games. 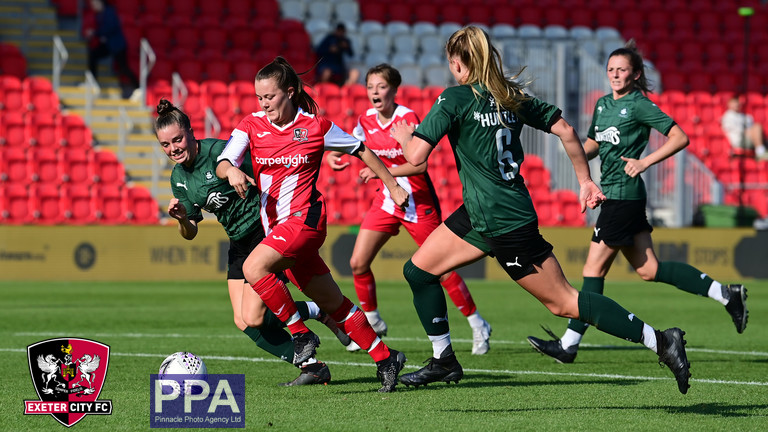 The last time the two sides met it was a tight battle, Victoria Taylor’s first half penalty being cancelled out by two late Connie Pengelly goals, as City progressed in the FA Cup back in late 2020. Taylor has been in goal scoring form in recent weeks for Town and she will again be a threat. Megan Attenborough will be another danger that City will need to subvert, Attenborough has been a consistent performer for the Wiltshire side since her return from studying in the US at the Wayland Baptist University in Hawaii.

In front of a big home crowd at a Football League venue, this will be another exciting opportunity for Abbie Britton and Aaron Wakley’s side to showcase their talent. With the team on a run of three successive league wins, and buoyed by the County Cup victory over Plymouth Argyle, this is another big afternoon. It looks set to be a closely fought fixture, but one the Grecians will be hopeful of taking three points from to further increase the pressure on leaders Cheltenham Town.