Forest Green are the next challengers to Exeter City as they visit St James Park on Saturday.

With matches between the two sides entertaining affairs to say the least, Jed Penberthy looks back on an FA Cup classic double header in 2017 where nine goals were shared across the two ties.

The oldest club competition in the World cooked up yet another memorable fixture as Exeter City travelled to Gloucestershire in the Second Round. City had already burst the bubble of seventh tier Heybridge Swifts in the first round to set up the tie with their Westcountry neighbours.

Paul Tisdale made one alteration to the team that beat Accrington the week before. Troy Archibald-Henville came in for the injured Troy Brown as City switched to a back three.

Like a true cup tie, both sides looked for the first blow with chances at both ends but it was Rovers who opened the scoring on 25 minutes.

A delicious ball through the centre from Reece Brown put Christian Doige through and the striker made no mistake sweeping the ball under the onrushing Christy Pym. 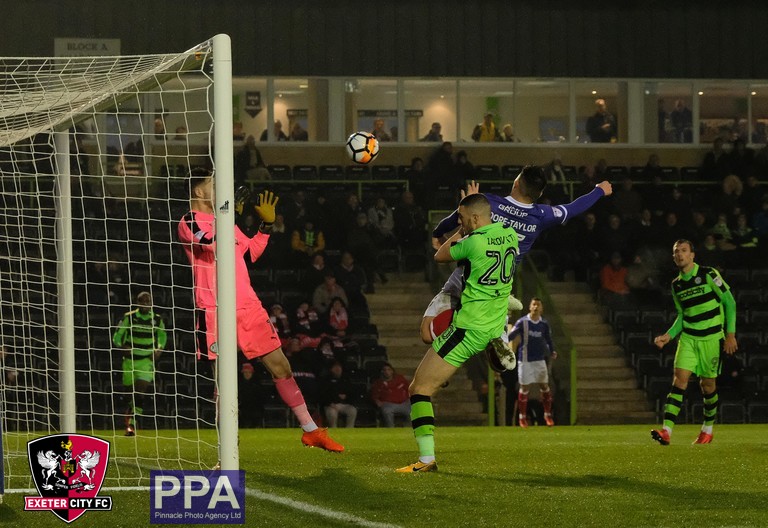 Into the second half and City, who had Pym to thank on a number of occasions keeping the score down, found themselves level through Jordan Moore-Taylor. On the second attempt following a corner, Lloyd James looped a cross back into the danger area. The City captain was the only one in the box with a purple shirt, but he rose above the Rovers rear guard and brought City on level terms.

The Grecians soon gained the advantage with a delightfully worked second goal. James again a key provider and played the ball around the corner for Hiram Boateng to chase. The midfielders pull back was gratefully met by the onrushing Jayden Stockley who smashed the ball high into the Greens’ net.

In the dying stages the game would soon descend into madness. With two minutes of normal time to go Scott Laird muscled his way into the Exeter six-yard area and powered home an equaliser. And two minutes into stoppage time Forest Green thought they had booked their place in the third round.

A pacey counterattack exploited the game-chasing Grecians and Dan Wishart set away Luke James on the left. The winger’s ball was on a plate for Doidge who netted his second of the game to send the New Lawn into raptures.

But the party-pooping players in purple had other ideas. With the whistle on the tip of the referee’s tongue, Pierce Sweeney hooked in a late corner and there was Stockley again to od home a dramatic equaliser to send the game back to St James Park. 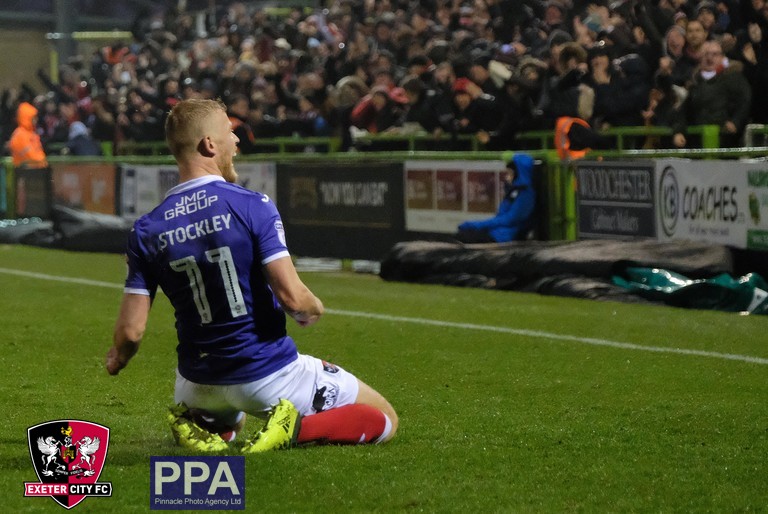 The alure of Premier League West Bromwich Albion was at stake for the winner of the replay and neither side were taking any chances. Defeat at the weekend prior against Colchester tempted Tisdale into five midweek changes.

With the openness of the first game in the back of both clubs’ mind, the caginess began to seep into both teams performances.

Christmas hats adorned across the Big Bank the home side probed in the early exchanges. Liam McAlinden broke away only to be denied by the feet of Rovers keeper Brad Collins.

After half an hour it was the visitors who took the first step into the illustrious third round. The ever dangerous Toni Gomes made a burst into the City box and as Danny Seaborne stepped across, fouled the onrushing striker and conceded the penalty.

Doidge continued his good form against the Grecians squeezing the ball under Pym, who should have done better. 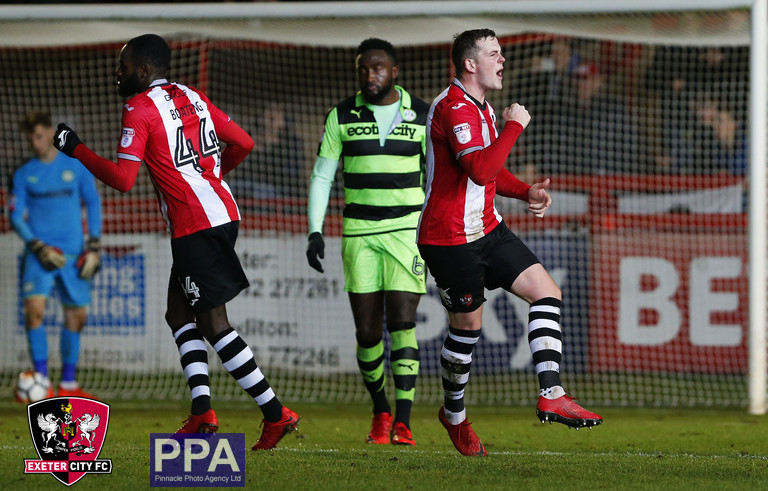 Seaborne made amends with a goal saving challenge on Wishart at the back post as Rovers pushed for a second.

Into the second half and the tie got undeniably tougher for Exeter. Jordan Tillson picked up his second yellow on 63 minutes and the ten-men of City faced an uphill battle.

But it was the Little Club on The Hill who came tumbling down. Kyle Edwards made a surge into the Rovers box with 17 minutes remaining. Pierce Sweeney converted the spot kick with confidence to send the Second Round Replay the distance.

As tensions rose Manny Monthe was booked for his second offence meaning the remainder of extra time with ten-apiece and just six minutes later the Grecians found themselves with an illustrious Premier League tie to come.

Hiram Boateng, ever present around the Forest Green box found half a yard of room on the left-hand side. Always on the right wavelength, his inch perfect cross into the middle was met yet again by Jayden Stockley and Exeter’s club record signing stooped low to nod behind Collins to finally put the tie to bed.

That year a truly memorable FA Cup encounter between this weekend’s opponents went down as one of the most entertaining games in both clubs’ history. Now back at the Park in front of the fans, fingers are crossed for the same drama this Saturday.