Exeter City Football Club will take a stand against homophobia in football at this Tuesday's home match with Barrow.

Following the postponement of the original fixture back in February, the match against will be designated as the Club’s annual 'Football v Homophobia' fixture and will be the 13th time that an annual Exeter City home game has been designated as an FvH match.

Volunteers from Proud Grecians, the club's LGBTQ+ and allies group, along with friends from Exeter Pride, Isca Apollo, Exeter University LGBTQ+ group, Devon FA and the club's One Game One Community Group will be giving out flyers and stickers to some of those attending the game.
Players will warm up in Football v Homophobia t-shirts and there will be articles in the match programme and announcements made before the game.

The Lord Mayor of Exeter, Cllr Trish Oliver and her consort, her husband Robert, will be honoured guests at the club for the match to show support for the FvH campaign.

The Lord Mayor says that she will be wearing rainbow laces and a rainbow armband for the match.
The FvH campaign was launched to challenge discrimination based on sexual orientation, gender identity and expression at all levels in football.

It is an international initiative that engages in campaigning, education, advice and guidance, research, policy consultation and capacity building to make existing football structures safe, welcome and inclusive for LGBTI people.

The campaign also creates opportunities and promotes engagement of LGBTI people in football at all levels and in all forms, improve the representation and visibility of LGBTI people throughout football and to realise the potential of football in society as a tool to create positive change.
It was founded after the death of Justin Fashanu, the first male English professional footballer to come out as gay while playing.

Justin played in a match for Torquay United at Exeter's St James Park on December 8, 1992. February 19 is significant as Justin Fashanu was born on that day and that was the inspiration for the FvH campaign.

Alan Quick, a member of the Supporters Trust and its OGOC Group, founder of Proud Grecians and co-founder of Exeter Pride is the local co-ordinator for Football v Homophobia.
He said: “Homophobia like all discrimination, has no place in football. It's time to call full-time on hate.

“Exeter City has a great record on opposing homophobia and five years ago the Club was recognised with an award for its long-term commitment by Lou Englefield, Director of the national Football v Homophobia campaign, who presented the OGOC Group with a commemorative pennant. 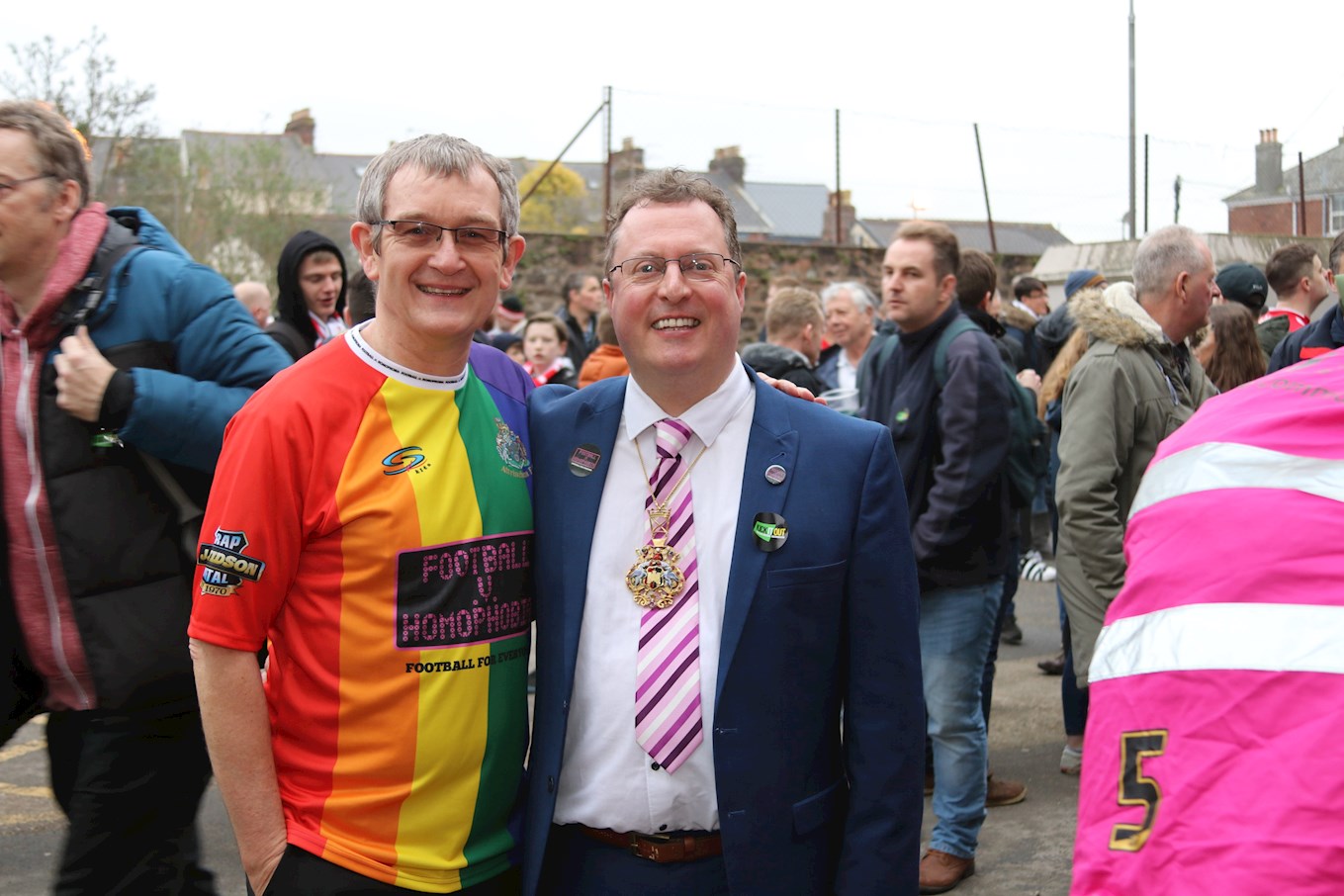 Alan added: "Homophobia and prejudice and discrimination against LGBT people in football is unacceptable. It comes in many forms, whether it is in person at a match, on social media and in other ways.

"I am really pleased that Exeter City is committed to creating safe and inclusive football environments for everyone, regardless of sexual orientation or gender identity.

"Prejudice and discrimination in football affects us all, not just LGBT people.

"My late friend, Justin Fashanu, the first ever out gay male professional footballer suffered from racism and bullying and hostility after his sexual orientation became public, but so too have heterosexual footballers such as Graeme Le Saux and Sol Campbell.

"LGBT people are everywhere. Sons, daughters, mums, dads, aunties and uncles could be LGBT. LGBT people are in all walks of life. They are receptionists, doctors, bus drivers, physios, and yes, even footballers."

If you witness any behaviour during a game, like anti-gay chanting and hateful or prejudiced language, speak to a nearby steward, the police, a club official, or contact the FA by telephone 0800 085 0508 or email: footballforall@TheFA.com.

Alternatively, Exeter City have a dedicated match day hotline. Simply text "HELP ECFC" TO 62277 to report any form of discrimination within the stadium.