Before Exeter City’s under-18s return to the pitch from their mid-season Christmas break, Youth Team Head Coach, Chad Gribble, has reflected on his team’s season so far, and admitted that despite all the challenges they have come up against, it has been a decent campaign to date.

The young Grecians sit second in the Youth Alliance South West division, level on points with table-toppers AFC Bournemouth U18s, where City are arguably the most in-form team in the league so far, racked up the most amount of wins, scored the second-best in terms of goals, and are second in the goals against statistics too. It is safe to say Gribble’s players fully deserved their period of rest and recovery in these past few weeks.

But their season began all the way back in July, when the new group of scholars reported back for pre-season training, and preparations for the next nine months began. Gribble explained, however, pre-season didn’t come without its tests. 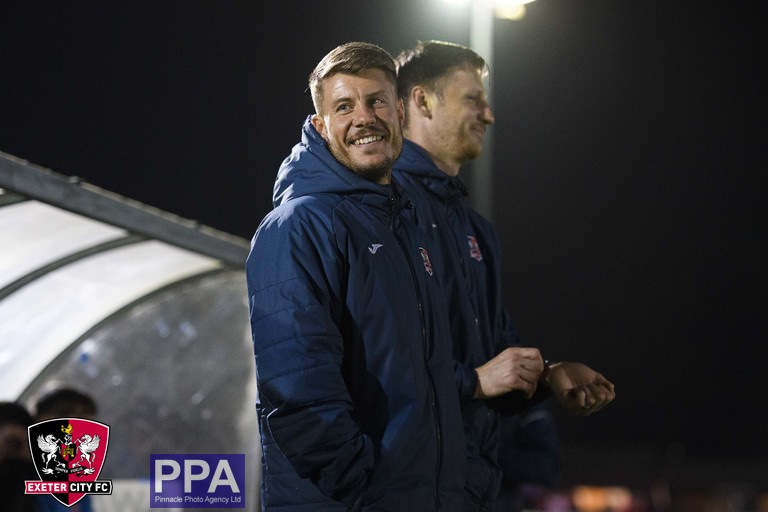 “The early part of the season was certainly disrupted. We had a fantastic start to pre-season, and had a great programme in place, but we ended up playing only one match from our original plan. But we made the best of a bad situation, before we were hit with COVID cases ourselves. That had a bigger impact than what we originally thought, and we were off for a 10-15 day period, and had to wait to get some of the players back as there were boys who were struggling with their breathing.

“Pre-season was certainly as productive as it could have been. The match against Charlton was a good benchmark. There were other trips we lost to COVID which was a bit frustrating, but we did what we thought was best and made a good job out of it with the alternative fixture list.” 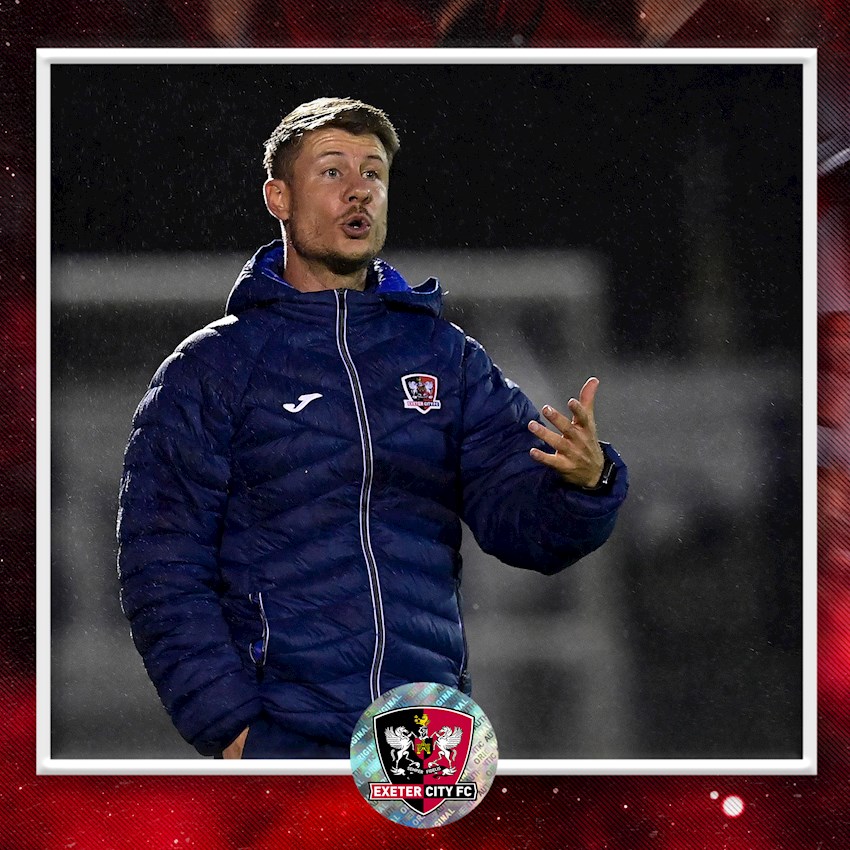 With the difficult pre-season completed, Exeter’s youth side then went into their league campaign, with health complications still evident in their squad. That made things extremely testing for Gribble and his players, and three defeats in their first three matches left them rooted to the bottom of the standings. Gribble explained the hurdles his squad had to overcome.

“It was tough, as we had bodies that weren’t fully fit. We had to rely heavily on the Under-16s when usually we like to feed them in gradually. But we were excellent against Bournemouth for an hour, but in the end, they had too much. We played well against Cheltenham, but we were fragile, and we got overpowered. We were outstanding against Portsmouth, and I still think it was one of our best performances to date.

“We played a Youth Alliance Cup match against Plymouth afterwards, and that was all about getting the result, and it kick-started a real confidence and belief in the group. The start of the season had its challenges, but we learnt so much about ourselves as staff, and about the players in what was tough circumstances.

“That Plymouth game was just a positive result against a team who had started the season strongly. Any game against them is something the players are always passionate about, and both teams include many local boys in their group so it means a lot to them. It was really pleasing to progress because they had started so strong, and the result gave our players belief.”

What followed was some outstanding form in October, with Gribble’s men racking up four straight league wins, including three clean sheets, as well as progression in both the Youth Alliance Cup and the FA Youth Cup. Gribble acknowledged that this was a period when things started to come together for his team.

“We started to tie things together, picking up clean sheets, and showing that the work the players had done was starting to pay off. It was a positive month, and we really started to see developments in the players individually and collectively as a team.

“Afterwards we lost to Plymouth in the league, but that didn’t rattle our momentum. We played reasonably well, but conceded a poor goal. But the defeat gave us a great opportunity to talk about our approach. The loss came at the right time, and ensured we never got complacent.”

Off the back of the defeat to their rivals, the Grecians then went on another four-game winning streak, despite exiting both cup competitions. Gribble admitted, however, that his team should mark their cup runs as successes rather than failures.

“Of course, you want to progress in the cups, but it was another year when the team reached the southern section semi-final of the Youth Alliance Cup. We played a strong Wimbledon side, who had lost just once before that match, and it could’ve gone either way on the day.

“The FA Youth Cup run was a fantastic achievement, but, because we’ve been so successful in the competition before, there may be a bit of expectation on us, and the players don’t get the credit they should for getting that far in the cup. A lot of clubs on our level go out before that so the team has done well to reach round three, and we went out to a Bournemouth side who are reasonably strong.

“What both cup runs did was provide a fantastic experience for the players. In the FA Youth Cup game against Chelmsford we travelled up on the day, and although we got ourselves an early goal, we started a bit slow.

“Then for Wimbledon, we had an overnight stay, and then an early kick-off. Those kinds of experiences are invaluable to players at that age, and credit has to go to the players for getting themselves to that position.

“There are many different ways we could’ve dealt with the number of games we had at that moment, and we could’ve easily played the Under-16s to keep things fresh, but we wanted to expose the team to as many real-life experiences as possible, and it meant that they were playing sometimes twice in three days. It replicated a typical first-team Christmas period if you like, with a large amount of games in a short space of time, but that didn’t really affect our form, and the players showed real resilience and character. People can often forget that travelling can take it out of you, but the players embraced it, and they didn’t use it as an excuse, so I am particularly proud of their achievements.”

While City’s U18s find themselves out of the Youth Alliance Cup and FA Youth Cup, their exploits in the Devon St Luke’s Bowl continue after the club allowed Gribble and his young side the chance to represent them in the regional competition. Gribble described the gratitude he had for the club for the additional opportunity his players were given.

“The Devon St Luke’s Bowl is an underrated competition, and it has provided players with the biggest set of experiences young players can experience. I am grateful to the club for allowing us to compete in the competition, as a lot of clubs put their reserves or Under-23s out in their county cup matches. It gave our boys the chance to test themselves against senior players, in some difficult conditions, and on some difficult pitches. We had one fairly good performance against Marjons, and one outstanding game against Honiton, and our match against Axminster in the next round, in front of a small crowd, should provide another valuable bit of experience once again.”

But while the Devon St Luke’s Bowl has been constructive, Gribble’s highlights of the season have come in the league and cup competitions.

“Both Portsmouth games, we were quite dominant against a really strong opponent. Away at Oxford, we had a depleted squad, but the Under-16s stepped up. Oxford are always competitive and so strong but we were resilient and hard to beat.

“Then against Bristol Rovers in the FA Youth Cup, that was probably the highest pressure game we’ve had, and we went into that as favourites. We were away from home, in front of a large crowd, and there was a lot at stake, with the chance of having another opportunity if we progressed, but it showed we could deliver a performance under pressure.”

“The group, as a whole, have been excellent. We talk about individuals a lot, and there have been some fantastic individual performances along the way. As a football club, we are pleased with the progress of a lot of them. There’s a healthy competition for places. If I were to have a message for them for the second half of the season, I think it would be to keep taking things as they come. It would be lovely to win the Youth Alliance league, but there is a bigger picture here, and that is the players’ futures. Sometimes as coaches, you have to make decisions, and, as a consequence, you can suffer with results and performances, but if everyone continues to improve and develop, we know that’ll be better for the bigger picture. The message to the players would be to keep their developments at the forefront of their minds.

“We are a part of a very competitive league, and we enjoy that. There are no easy games, and there is a lot of variety. We always try and qualify for the top Merit League, and we are on track to do that which is pleasing. We want our players to go up against the strongest set of opponents if we want to create the best kinds of players, and that is what the top Merit League allows us to do.

“I would like to get some of the senior players out on loan so they can continue their developments, which will mean we can challenge the next set of players. The 1st year scholars will have to step, and the under-16s who have been offered scholarships will have to step up ready to adjust to their new lives as full-time players.

“We always want to stretch our players to the max, and I am extremely pleased with where we are at right now. We have had some of our second years playing over Christmas, and we want to send one or two more out into the non-league scene so they can gain some great experiences. Those wheels are in motion, and I am excited at the prospect of our Under-17s group, and the Under-16s coming through. It may be a challenging second-half to the season, but it helps us maintain our constant flow of production of players.”