At half-time during City's match against Yeovil Town on Tuesday, the Exeter City Academy will take to the pitch for their annual parade. After the parade, the under-18s will be presented with the South West Youth Alliance division title by chairman Julian Tagg.

Ahead of this, we take a look at yet another successful season for the Academy.

2017/18 has been another extremely successful season for the Academy at Exeter City FC so far. The Academy players and staff are in attendance at tonight’s game alongside their individual kit sponsors who are thank for their fantastic support.

There have been some very notable success stories throughout the age groups from the under-9s right through to the under23s and there is still plenty of exciting football ahead before the season finishes at the end of May, with the Academy’s annual 6-a-side tournament which takes place at Feniton Football Club on Saturday 26 and Sunday 27 of May.

The under-23s performance in the Premier League Cup has been outstanding so far, finishing top of an extremely competitive group alongside the likes of Brighton & Hove Albion, Hull City and Sunderland. City are the only League Two side left in the competition and with only one team from League One remaining, all other clubs to have qualified are Premier League or Championship sides. A great achievement so far and we look forward to the knockout fixture against Wolves in the next round. 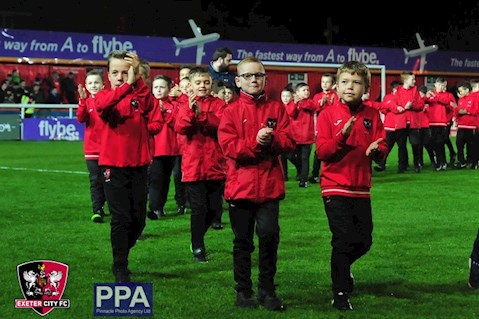 Academy Parade at half-time on Tuesday

The under-18s will also be very pleased with their season to date. They have won the Youth Alliance South West League for the second year running become the first team to retain their status as champions. In the second half of the season they go into Merit League 1 which combines the top 6 teams from the South West League with the top 6 from the South East League. This has also started positively with 2 wins from 2 and the team yet to concede a goal.

In the YDP, our under-16s finished runners-up in their competitive games programme out of the 9 teams in the competition, whilst the under-14s and under-15s have both qualified for the semi-finals of the Floodlit Cup after topping the group stage of the competition. The under-12s and under-13s have also displayed some excellent performances since the start of the season and continue to impress the coaching staff. All of these age groups will look forward to the upcoming tour to Stockholm where we play against Swedish top division teams, Hammarby, Djurgardens & BP.

The FDP contains our Under-9 to Under-11 groups and they have also had lots to shout about this year. We have had teams invited to St George’s Park by the FA for training days and have played against top teams in the form of Southampton, Swansea, Stoke and Aston Villa competing extremely well in all of these fixtures. These youngsters also have a foreign tour to look forward to with the boys heading to Germany at the end of May to compete in a tournament.

The progression pathway has seen a number of Academy graduates catching the eye at higher league Clubs too. Ethan Ampadu has broken straight into the first team at Premier League champions, Chelsea, already making 7 fiirst team appearances as well as representing Wales on two occasions, receiving the man of the match award in his first start for his country against Panama.

Ollie Watkins has had a great breakthrough season in the Championship at Brentford scoring 11 goals for his new club as they push for a play-off place. Matt Grimes has impressed on loan at Northampton Town in League One, joining on loan from Swansea City, providing a number of important goals and assists.

Meanwhile Sean Goss and Elliot Frear have both caught the eye with their performances in the Scottish Premier League for Rangers and Motherwell respectively.

All of these achievements are a credit to the fantastic work that has been done by the Academy coaches and other multi-disciplinary staff over the past 10 years plus. We thank all of them for their continued commitment.