Exeter City travel to Stevenage in their first match away from home of the 2019/20 season in Sky Bet League Two.

The Grecians go into the match following an opening day home win over Macclesfield Town at St James Park, and manager Matt Taylor believes it puts them in a positive position going into a tough match at the Lamex Stadium.

The City boss said: “It was a difficult game in terms of the performance, but we got the outcome that we wanted in terms of the three points and we move on now to Stevenage.

“We gave the lads a bit of down time at the start of the week on the back of the pre-season schedule and they’ve had two or three weeks of playing on Saturday and then Tuesdays. Hopefully they will be well rested and fresh in terms of their minds and bodies."

It hasn’t been too long since the sides last came up against each other as City travelled to the Lamex stadium towards the end of last season. 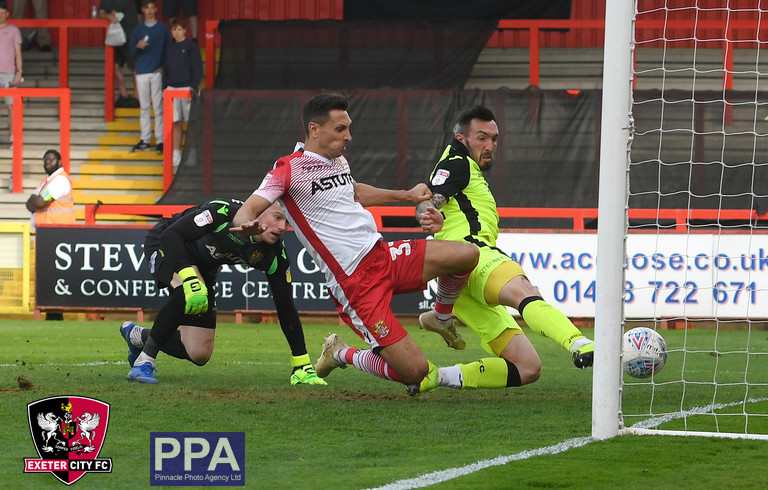 City then had a goal disallowed and Randell Williams crashed an effort off the crossbar as Matt Taylor’s men were unable to take the three points on the road.

The game kicks-off at 3pm and ticket prices for the south stand are as follows:

Advanced discounts: Yes, prices will increase by £2 on the day of the game. Tickets can be purchased on the day from the turnstiles only and is cash or card.

Grecian Travel: The supporters' coach will depart at 8am for a fee of £33. Online bookings have now ended. To book please contact Grecian Travel directly via: john.bishop790@btinternet.com or call (after 6pm) on 07904 063 334.

To get to Stevenage from Exeter take the M5 north all the way up to the M4 East where you need to travel towards London. You then need to join the M25 clockwise and follow the motorway for a period of time before taking the exit for the A405. Continue along this road before you come to a roundabout and take the third exit for the A414. Follow this road for a while before you meet the A1 which you need to follow before leaving for a main roundabout and the A602 which will take you to the stadium.

You can take the train from Exeter to get to Stevenage, but this will often require around two changes. If you take the 09:55 service from Exeter St David’s to London Paddington, you then need to take the underground to London King’s Cross. From there you need to take the 13:16 train to Stevenage which gets you there for 13:44. There is around a 1-mile walk from the station to the stadium. Coming back from Stevenage, you can get the 17:47 train and take the reverse route which will get you back to Exeter St David’s for 21:34.

According to footballgroundguide.com, there is a large club house bar at the ground, behind the south stand, which is popular with both home and away fans alike. Otherwise, there is not much in the way of pubs near to the ground. Still, if you like your real ale then it is worth taking the 15-minute walk to the 'Our Mutual Friend' pub in Broadwater Crescent.