With Saturday’s stalemate with Bradford City a winner must be found on Tuesday night when Exeter City host Wycombe Wanderers at St James Park in the Carabao Cup.

So, take a seat and read up on the Chairboys.

In 1887 a group of young furniture tradesmen called a meeting at the Steam Engine pub with the aim of forming a football club and entering junior football. It’s believed the team were named after the inaugural FA Cup winners The Wanderers, who had visited the Buckinghamshire town ten years previously to play the then main High Wycombe club.

Though an old Roman Villa, High Wycombe gained status in the linen and lace trade during the Tudor period shortly before becoming the industrial home of furniture, something still celebrated with the club today via sponsorship. Famous ‘Windsor Chairs’ were the order in the 19th century hence the obvious club nickname.

Famous faces from the area include Bake Off and Mighty Boosh star Noel Fielding and the sixth Doctor Who, Colin Baker- which is presumably why High Wycombe hasn’t been attacked by any Daleks recently.

In 1931 Wycombe won arguably the best achievement prior to turning professional, winning the FA Amateur Cup beating Hayes at Highbury. A year later the club reached the First Round Proper of the FA Cup for the first time, narrowly being edged out by Gillingham in a replay.

During the 70’s and 80’s Wycombe sensed a “loss of purpose” but the 90’s came with renewed hope, a new ground and a fresh-faced Martin O’Neill to steer fortunes and win the FA Trophy. In ’93, Wanderers were promoted as champions into the Football League, and they haven’t looked back since.

A couple of Cup runs throughout some yo-yo years put smiles gave the Chairboys some legs and the appointment of Gareth Ainsworth has seen the club go from strength to strength. In the last three years Wycombe have gone from League Two to the Championship and were just one point off safety after the final day of last season, dropping back into League One again.

The second longest serving manager in the Football League has been at Wycombe since 2012 and will remain in the Chairboys history books for eternity. Gareth Ainsworth successfully guided the Blues to the second tier for the first time in their 130+ year history in 2020 cementing his stature as a club legend. 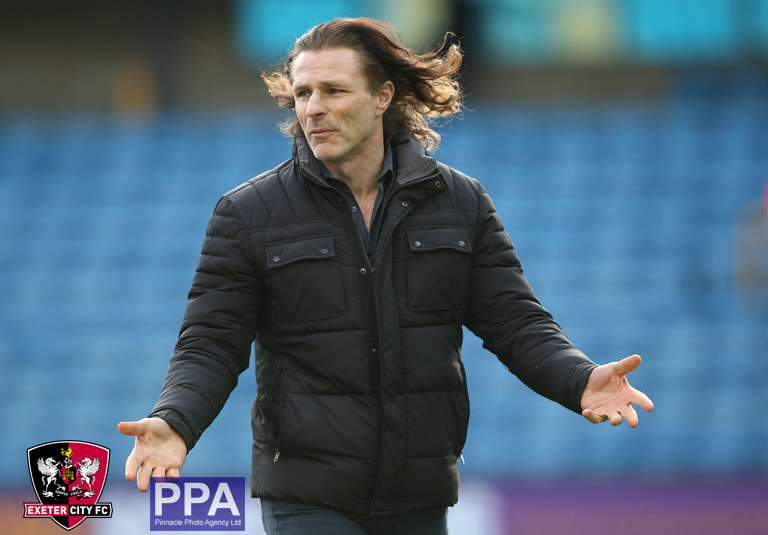 As a player Ainsworth had already made over 100 appearences for the Adams Park side before hanging up his boots in 2013. This ended his 20 year playing career where spells at Preston, Wimbledon FC and Cardiff City racked up over 500 games in total.

As Wycombe boss he has guided the Blues to six victories over City with Exeter only winning three bouts with the 48-year-old.

Replacing the old Loakes Park in 1990, Adams Park has been the home of Wycombe Wanderers since 1990. Over the years it has played hosted to London Wasps in the Aviva Premiership and the successful Reading F.C women’s side in the FAWSL. 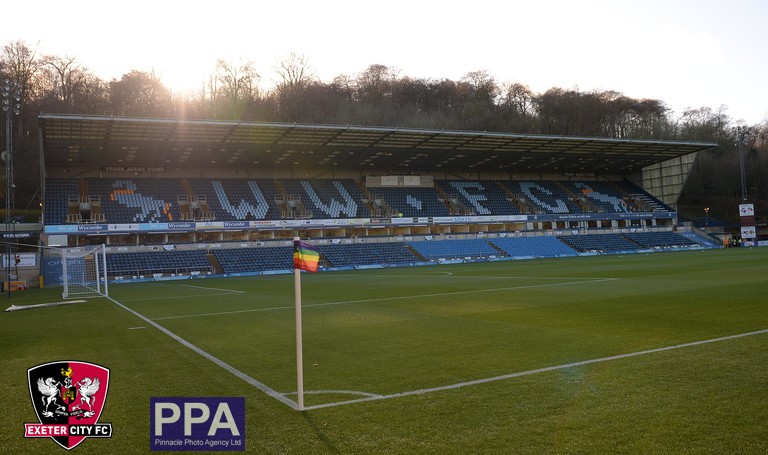 It took nearly thirty years of planning before Adams Park was finally built after the club sought to leave Loakes in the early 60’s. The land was sold for to develop the nearby hospital which almost fully funded the construction costs of their new home.

With Martin O’Neill in charge, the ground brought in the new era of success to Wanderers with an FA Trophy victory the same season, and just last year a lucky few managed to see the Buckinghamshire side compete in the Championship for the first time ever, during the temporary lift of Covid restrictions around Christmas.

Though coming to the twilight of his career Adebayo Akinfenwa is the cult hero of the English Football League. The man-mountain has gained celebrity status for his unique stature and his Olympic standard strength.

His playing career is just as impressive. Born in London, the 39-year-old has played for fifteen clubs in 18 years and is embarking on his final year as a professional footballer. Starting in the Watford Academy, the 6ft1 striker has played in Lithuania and Wales before a move to the Football League in 2004 with Doncaster Rovers. 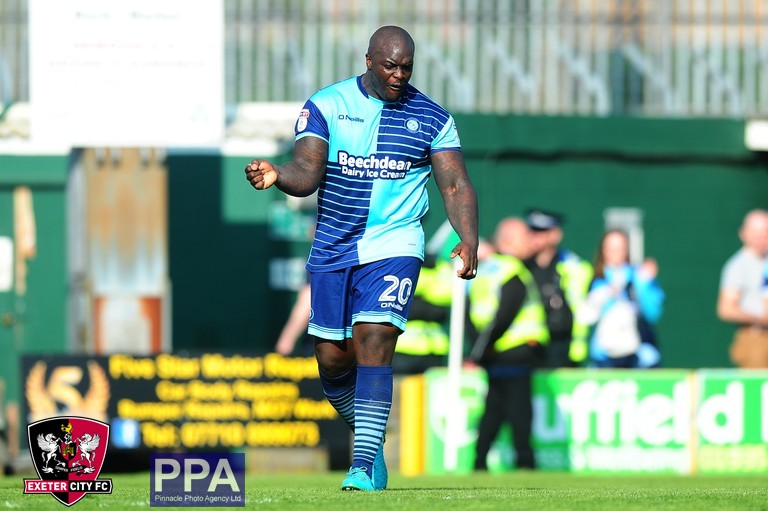 A brief stint at Plainmoor in the mid-2000’s with 14 goals in 37 games for Torquay, saw a money move to Swansea City scoring the very first goal in the newly built Liberty Stadium. Whilst at Northampton he began to grow acclaim with the rise of the FIFA videogame franchise earning him the accolade of the strongest player in the game.

At Wimbledon, Akinfenwa scored an outrageous goal in front of the Big Bank widely received as the best of his 117 career strikes as he continued to terrorise League Two and League One defences before playing a crucial part in Wycombe’s Championship promotion season.

When the season closes Akinfenwa has set up his plans a post-retirement career in front of the camera.

Gareth Ainsworth’s Wycombe bring a ‘bogey side’ demeanour despite having not played each other since 2018. The Grecians are unbeaten in the last three fixtures including an impressive 4-2 victory in 2017, though Wycombe have the edge on the historical results.

Forty-six goals have been share between the two sides at an average of 2.3 goals per game.

Marcus Bean’s second half strike cancelled out Lloyd James’ freak free-kick as both sides battled for a point in the hunt for promotion.

Despite a flurry of glorious goalscoring chances, the points were shared in an open 0-0 draw.

David Wheeler equalled an 81-year record with his sixth goal in six games for the Grecians, with Troy Brown, Joel Grant and Ollie Watkins capping off a memorable night under the lights.

Prior to Brian Lee’s appointment as head coach in 1969, the next matchday squad was decided by a Match Committee rather than the manager. The committee would meet every Monday Evening to discuss the next starting XI.