This was a very attractive nod to the fact that Brazil’s first ever match was against Exeter in Rio de Janeiro way back in 1914. Now the Brazilians were playing the return leg as five times World Cup winners in what was dubbed a Centenary Friendly.

It was a Centenary game because Exeter City’s date of formation had always been given as 1904. But was this correct? A single newspaper report from that year proved worthy of a lot closer inspection.

And that is exactly what Exeter City historian Aidan Hamilton did when researching for his epic ‘Have you ever played Brazil?’ book published to coincide with the centenary of the 1914 match.

The newspaper report in question was a four-paragraph story in the Western Times dated June 1, 1904. It was an account of the AGM of St Sidwell’s United Football Club held the previous evening at The Red Lion Hotel in Sidwell Street, Exeter.

And there almost lost among the news of elections and votes of thanks was a vital sentence. This read simply “It was decided to change the name of St Sidwell’s United to Exeter City Association Football Club.

A simple sentence indeed but the ramifications were significant. As this was just a change of name then the organisational entity that became Exeter City was formed earlier than 1904.

St Sidwell's were not the only football club to change their name around that time. It was far from uncommon for teams to take on the name of the city or town they played in. St Mary's became Southampton in 1894, Thames Ironworks switched to West Ham United in 1900 and Newton Heath LYR were renamed Manchester United in 1902. 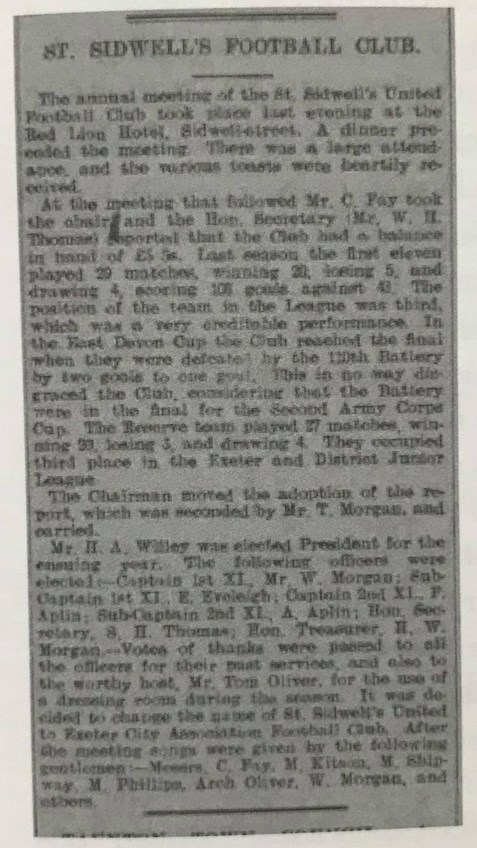 But if the Club that is now Exeter City wasn’t formed in 1904 – when did it start? Research now turned to the origins of St Sidwell's United. Again newspaper reports are vital in helping answer this question.

The first we hear of St Sidwell’s is when two of their members, Sid Thomas and E. Eveleigh, attend the formation meeting of the Exeter Junior League on June 3, 1901, as reported by the Western Times two days later. Their first recorded match was against Dawlish and the Dawlish Gazette of Sept 28, 1901, describes St Sidwell's; a new organisation.

So the club definitely goes back to 1901. It might even go back earlier but proof will be needed. For instance, a link to the Exeter Wesleyan United club who played the 1900/01 season needs further work. As does a tantalising reference to a St Sidwell’s United team wanting a Boxing Day fixture in 1900.

But for now the balance of evidence points to 1901 and this is now recognised by the Club as its date of formation. That makes this year the 120th anniversary and the Exeter City Football Club Museum Trust is planning to celebrate this milestone with various initiatives.

The aim is to focus on the St Sidwell's United story and are currently at the research stage. This is where we are looking for help. Among the things we are looking at are:

Martin Weiler studied History and Archaeology at the University of Exeter. He is an active member of the Heavitree Local History Society and a Trustee of the Exeter City Football Club Museum Trust. The Club;s digital archive is at grecianarchive.exeter.ac.uk and the Museum can be contacted via will.barrett@ecfc.co.uk.