City started brightly; early pressure resulted in a mistake by the visitors, as Goalkeeper Laura O’Sullivan collected a back pass. The free kick from inside the penalty area saw a shot from Anthea Kaptein drift wide. However, the Grecians were not to be denied for long. Meg Robinson weaved her way past three defenders from her right wing back role to deliver the perfect near post cross, Connie Pengelly finished from close range to give City an early lead 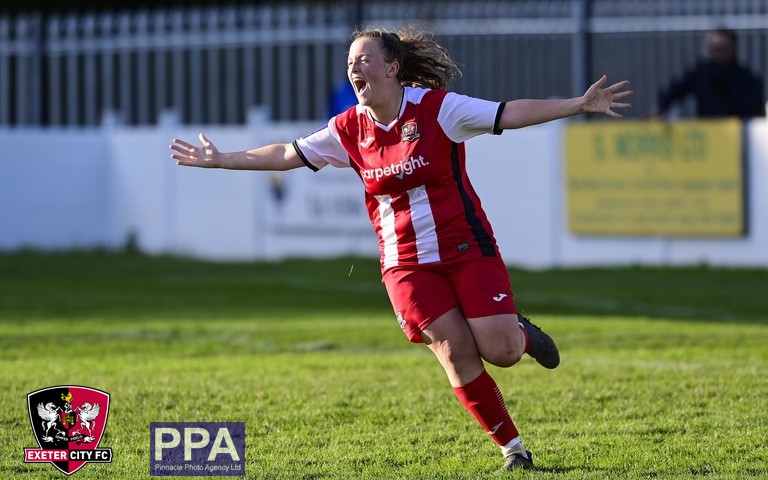 Cardiff responded quickly. Ellie Sargent raced in on goal, but the pressure applied by Manfy Sharpe was enough to deny a clear shot on goal. Sargent was again the threat moments later as she went on a mazy run through the City backline, her shot smothered by Abbi Bond when it looked certain to be an equaliser for Cardiff.

With the home side now under increasing pressure, the visitors would continue to get closer to levelling the tie. Some dubious officiating allowed a quick free kick to be taken with a clear rolling ball, but it allowed for another Cardiff chance, Sargent again at the heart of it, as her effort was drilled wide. A free kick from Libby Piggott then thumped Abbi Bond’s crossbar as the Exeter backline were working tirelessly to limit the threat.

After weathering the Cardiff response, City began to find their way back into the game. Sarah Stacey’s shot on the turn was brilliantly denied by O’Sullivan and Phoebe Baker’s driving midfield run saw her effort on goal drift wide from the edge of the penalty area. The half would finish with more assertive goalkeeping from Bond as the ebb and flow of an absorbing cup tie headed to the interval.

The second half began with Bond denying Olivia Thompson at her near post with the City keeper continuing her fine run of form with an instinctive stop. The game then entered a period of competitive play but with neither side gaining much territory, the City backline again resolute in their desire to keep the visitors at bay.

With the tie looking set for a big finish, a moment of brilliance appeared to settle it. Sarah Stacey gathered the ball before releasing a defence splitting pass to Connie Pengelly, with only the keeper to beat, the City youngster calmly took the ball around her and finished into the empty net. 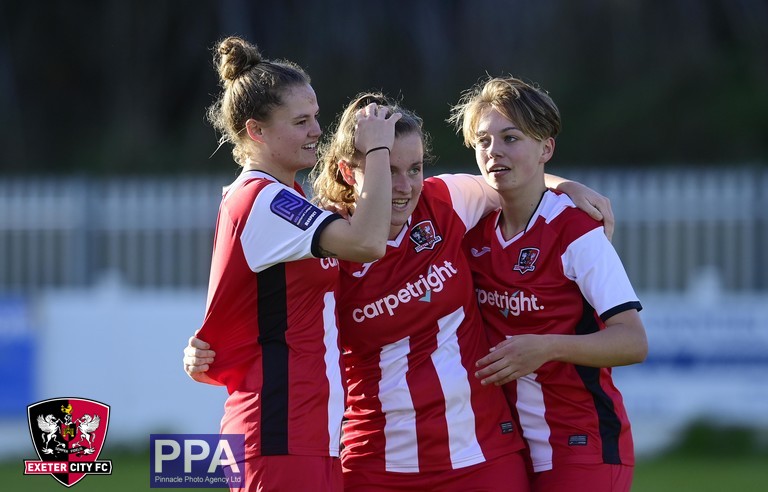 Game over? This had been far too good a Cup tie for that to be the case, and Cardiff were quickly back in the game. After being so assured from corners all afternoon, City failed to deal with the initial cross, and Amber Roberts was in the right place to head the ball into the net and get her team back into the game.

Pengelly went close to her hat trick, a fierce strike held at the second opportunity by Cardiff substitute goalkeeper Wojtyczka. The game then had two big moments as full time loomed, a Cardiff corner was not cleared and, as the ball bounced around in a congested penalty area, Olivia Thompson’s shot hit the inside of the post before being cleared by Jaydee Seaman. With that chance survived, City then created their own. Pengelly flicked the ball over the last defender and Anthea Kaptein raced in on goal before being denied brilliantly by the on rushing Wojtyczka.

It was a finale that felt it had one more goal in it, and it was to be City and Pengelly that had that final say. Mia Preston won a battle in the midfield and the loose ball allowed Pengelly to get clear of the last defender and head towards goal. With a delicate chip she beat Wojtyczka to seal a memorable hat trick and City’s progression into Round Two.

A brilliant Cup tie with both sides giving everything, and Abbie Britton and Aaron Wakley’s side putting in a team performance where every player made a significant contribution. Pengelly, fresh from England College trials the previous day, will rightly take the headlines. A tireless effort with three finishes showing a composure beyond her experience. City have now won their last six games and the last three of those against opposition from a higher level, all eyes will be on Monday’s Cup draw, but there will be few clubs that this confident and emerging side will fear.