Following Exeter City’s partnership with Her Game Too, the club is delighted announce that this weekend’s St James Park double header will be dedicated to the anti-sexism campaign.

Saturday 16th October’s match between the men’s side and Newport County, as well as the women’s Devon derby with Plymouth Argyle the following afternoon, will form our “Her Game Too Weekend” as we continue our commitment to rooting out all forms of discrimination within our beautiful game.

Since the campaign's launch, #HerGameToo has surveyed over 400 female football fans across the UK to build a wider picture of the experiences they have faced when attending games, and it is sadly the case that some women have faced harrowing abuse at football matches across the country.

For both matches next weekend, the players will wear warm-up tops with the #HerGameToo logo, which the players will then sign to be auctioned off for charity. We will also be promoting the campaign across our social media channels to highlight some of the issues faced by women within a sporting environment.

We have invited some of the campaign’s founders to the Newport County match as the club’s special guests. 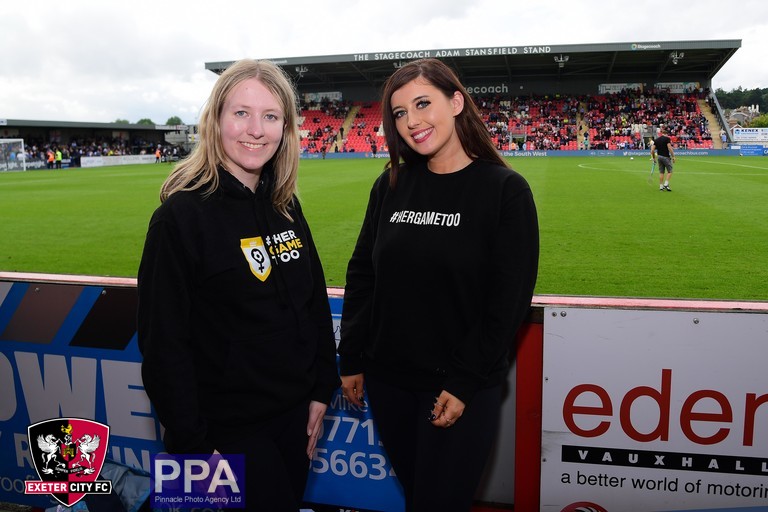 Caz May, co-founder said: “We are so excited to see the first professional football fixture weekend dedicated to #HerGameToo and for it to commence so quickly after we launched. Exeter City, Newport County and Plymouth Argyle have been brilliant in supporting the campaign, so it is fitting that they are playing each other for these dedicated fixtures.

“We would like to thank Exeter City for this fantastic gesture and I’m sure their female supporters are exceptionally proud of their club for all their support surrounding #HerGameToo so far.”

Thankfully incidents of discrimination are rare at St James Park, however, if you hear any form of discrimination in and around the stadium, report this anonymously via our dedicated hotline by texting ‘HELP ECFC’ to 62277.

Tickets for both fixtures can be purchased here 👇