Exeter City’s under-23s drew 1-1 with Swansea City under-23s in their opening game of the group stage of the Premier League Cup on a warm Tuesday evening at St James Park.

Despite a bright first half from the Grecians, it was the visitors who opened the scoring in the 35th minute when Dylan Morgan curled a long-range pearler inside Harry Lee’s far post.

A bright response from the hosts saw Sonny Cox strike the crossbar with a powerful drive, before they did level matters just before half-time through Callum Rowe.

The contest evened out in the second half, with both James Dodd and Sonny Cox close to netting an Exeter second, however, despite Morgan’s best efforts up the other end as well, the two clubs had to settle for a point apiece.Dan Green made two changes to his starting XI from last week’s match against Plymouth Argyle U23s, with Jack Veale and Nelson Iseguan coming into the line-up at the expense of Ellis Johnson and Harry Kite.

And it was the Grecians who started the brighter as just a few minutes in Ben Seymour’s hold up play allowed Sonny Cox to advance down the right flank. The attacker pulled the ball back towards the edge of the penalty area, however captain James Dodd could only fire his low shot at the goalkeeper.

The hosts’ attacking pressure continued and the contest was barely 10 minutes old when first Cheick Diabate, and then Sonny Cox, both looked for an early breakthrough, however, both efforts failed to test Jamie Searle in the Swans goal.

The Welsh outfit played some intricate stuff in the middle third, however, it was Exeter who looked the more likely to score inside the opening quarter of an hour, and striker Ben Seymour was next to try his luck, however, his curling effort was comfortably saved.

Swansea’s first opening came courtesy of some loose play from the Devonians, when Dodd’s loose pass allowed Tarelle Whittaker to dribble his way to the edge of the Grecians’ box. The referee adjudged Diabate brought down the away forward illegal, and was subsequently booked, however, the resulting free-kick saw Whittaker fire the ball straight into Harry Lee’s arms.

Diabate almost quickly atoned for his misdemeanour when he headed a Jack Veale free-kick over, but it was a sign that the home side quickly got back in control of things, and in the 27th minute, some lovely build up play saw Veale cross for Cox, however, the striker could only send his header off-target.

Again, it was the team in red who were the more prominent, and following a long clearance from Lee, the ball fell nicely for Dodd 20 yards out, before the skipper fired a half-volley inches past the post keeping matters goalless despite the game being 32 minutes old.

Dylan Morgan had City supporters worried when his low drive looked to have beaten Lee, but the shot fizzed wide. That, however, only proved to be a warning sign, as just moments later the deadlock was broken. Following a ball down the Swans left, Morgan cut inside and bent a superb effort beyond the reach of goalkeeper and inside the far post to stun the home side and silence the crowd.

It was a little harsh on the Devon outfit who were seemingly punished for their cutting edge in the attacking third. However, their response to the setback was admirable, and they almost levelled terms six minutes before the break in spectacular style. Cox drifted in from the right and sent a powerful thunderbolt towards goal from 25 yards out, however, the ball crashed against the crossbar, and danger was eventually averted.

Exeter’s youngsters however finished the half strongly, and deservedly levelled with the final bit of action from an eventful first 45 minutes. Rowe picking the ball up on the wing, before he dribbled his way to shooting distance, and sent a low rasping drive into the bottom corner via the upright to restore parity and make Dan Green’s half-time message that much sweeter. 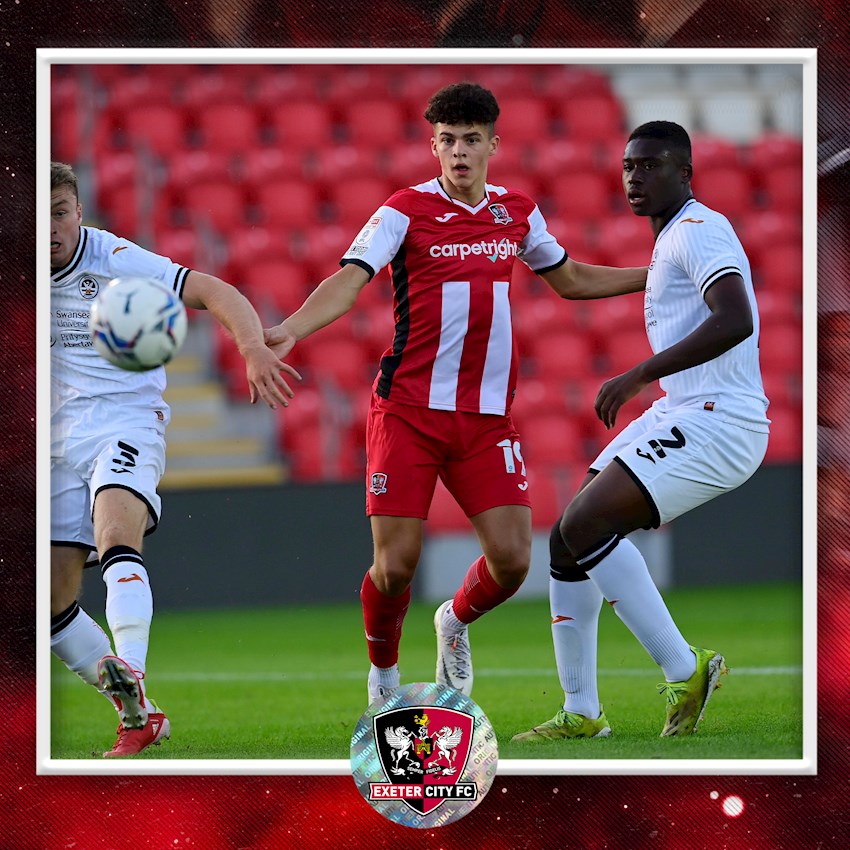 It was the away team who started the second period on top, forcing several corners and winning a number of free-kicks in dangerous positions. Fortunately, the Grecians got through that difficult period unscathed and it remained 1-1 as the hour mark approached.

Exeter’s first chance after the restart came from the boot of Seymour, when Searle’s scuffed clearance fell to the feet of the striker, however his rushed effort only went off target.

Just a few minutes later the hosts created perhaps their best chance of the night when Dodd found himself in behind the Swansea backline. The midfielder’s smart cut back located the run of Cox, however he was unable to provide the telling touch to put his team ahead.

In fact the Swans went millimetres from making it 2-1 themselves when Morgan’s free-kick drifted just past Lee’s left-hand post.

But that was just a rare scare as it was Green’s men who perhaps should have taken the lead midway through second half. Dodd once again found himself in an advanced position, and his whipped cross-shot just evaded everyone and went past the far post much to the relief of the Welsh club’s defence.

The home side were settling into a nice rhythm again, and as we reached the final 15 minutes, Veale helped create his team’s latest chance when his low ball looked for Cox at the near post, however, the angle proved too tight for the poacher to turn the ball home.

With seven minutes remaining, Alfie Pond’s close-range header was unlucky not to have found the back of the net, while moments later, Dodd’s whipped free-kick found the dangerous run of Jordan Dyer, but the centre-back’s glancing header sailed over.

As the contest crept into injury time, it was Swansea who almost stole the three points when Morgan latched onto a lovely clipped ball into the hosts’ 18-yard box. However the attacked could only get the faintest of touches with his head, and Lee produced a strong fingertip save to divert the ball away from goal.

There was still time for Whittaker to try his luck from distance; his deflected shot comfortably stopped however, meaning the points were shared after an incredibly entertaining 90 minutes.