In front of a record crowd for the Women’s team at Speeds Meadow, it was Plymouth Argyle who took victory, as they progressed in the National League Cup in a hard fought encounter between Devon’s top two sides.

With a strong summer of recruitment, City Manager’s Abbie Britton and Aaron Wakley knew the significant test that awaited their side, and it was the visitors who started brightly. Meg Lightfoot, making her first appearance of the season in the City goal, was quick off her line to deny Rebecca Dandridge, before Jaydee Seaman made a block on the line to deny Argyle the early advantage. Dandridge again caused the problem as she was denied by Lightfoot, the midfielder continuously seeking to make runs into the City backline from her deeper position.

After riding the early pressure, the home side began to find a tempo to their game. Connie Pengelly raced on to an Anthea Kaptein through ball and her shot was narrowly over the crossbar. The young forward was to provide moments later, good hold up play and a lofted pass found the run of Sarah Stacey, her shot was well saved by Poppy Soper in the visiting goal.

With the Grecians having their best spell of the game, a sucker punch was soon to follow. An Argyle corner was not cleared and, as the ball dropped in the box, Gabi Alphous reacted quickest to find the bottom corner and put the visitors ahead.

Buoyed by the goal, Ryan Perks’ side sought a second, Meg Lightfoot on hand to brilliantly tip over from Natasha Knapman as she battled at the back post for the chance. After weathering the latest Argyle spell, City, in this end to end encounter, fought back once more. Mollie Taylor, fresh from her two goals the previous weekend, thumped the upright with a fierce drive before Connie Pengelly was denied by a tip over from Soper.

The first half finished with City emphasising the spirit in which they had approached the game. Jaydee Seaman made an excellent last ditch challenge as Plymouth looked set to extend the lead, before Manfy Sharpe flew in to three consecutive challenges, winning them all, in a wholehearted bid to get her side back in the game. Seaman and Sharpe’s performances optimised their team’s spirit, both players fierce in the tackle and working tirelessly against their higher league opposition.

The second half began with City probing away without finding that clear cut chance, Phoebe Baker’s cross just evaded Toogood, whilst at the other end Lightfoot was quick off her line to deny Knapman once more. Zoe Watkins then found herself inside the penalty area, but, as the midfielder battled several challenges, the ball would not fall for a shooting chance as a corner was forced. 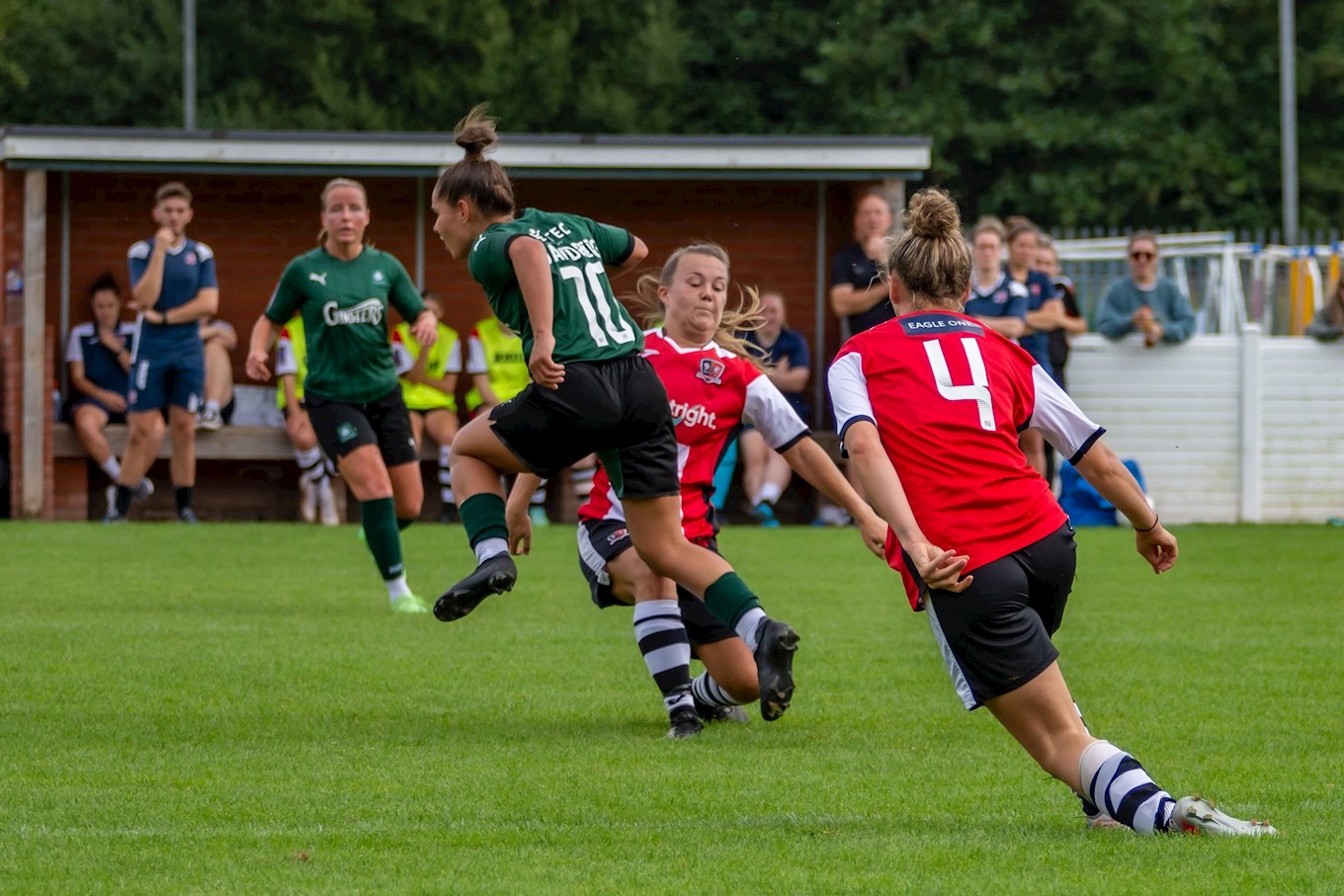 The pace of Alphous, movement of Knapman, and boundless forward running of Dandridge was always a threat once the visitors won possession in midfield. Knapman hitting over from close range in the latest attack, whilst the battle between Baker and Dandridge in midfield was excellent viewing as they sought to nullify each other’s threat.

With an hour played, it was to be Argyle who would have the game’s next big moment. A foul on the edge of the City penalty area saw a free kick headed in at the back post by former England and Arsenal player Jemma Rose, it was a crucial goal in a game that had been poised for a big finish.

Natalie Warman hit wide from close range, as City sought a way back into the game, but the visitors saw the final moments out without much discomfort to progress through and leave City to focus on the Plate Trophy competition.

This was an excellent advert for Women’s football in the South West and a crowd, with plenty of young supporters looking on, who will have been entertained and inspired by the display put on by both teams. A Devon County Cup tie awaits the sides on October 17 and it can only be hoped it is as good a contest as this one.