Exeter City’s under-18s recorded their first win of the season with a 9-8 penalty shoot-out victory over Plymouth Argyle under-18s on Saturday in the second round of the Youth Alliance Cup.

Jeffery Forkuo gave the Pilgrims the lead when he glanced a header in from a corner, before Eli Collins’ rocket levelled matters shortly after.

The Grecians went ahead with a well-worked goal early in the second period through Mitch Beardmore, and although Plymouth were reduced to 10 men on 71 minutes, they restored parity courtesy of Jamal Salawu’s header.

That leveller meant the tie was decided by penalties, with the majority of the attempts buried past the two goalkeepers. But it was City shot-stopper, Andrew Sowden, who proved to be the hero thanks to his two saves, and his own conversion from 12-yards, which ultimately sent Chad Gribble’s men through to the next round.

Exeter welcomed an Argyle side high on confidence after their strong start of the season, however, both sides began the Devon Derby tentatively as neither set of players could find a rhythm in their play.

Despite some early hopeful efforts at goal, the first real opportunity fell to Eli Collins, but the midfielder was unable to turn home a corner at the back post.

The possession statistics were largely in the hosts’ favour during the opening quarter of an hour, but the Pilgrims never found themselves out of the contest, and after seeing a shot deflected just wide, they took the lead against the run of play in the 16th minute.

A corner to the near post saw Forkuo win the aerial duel, and the defender guided a header in off Sowden’s left upright and into the back of the net to hand the away team the advantage.

The response to the setback was primarily good by the Grecians, and six minutes later Eli Collins again threatened, but this time his shot was turned away by Lewis Moyle in the Plymouth goal.

Moyle however had no chance with the equaliser, which came at the midpoint of the first half. Eli Collins delivered a deep corner where Toby Nevile guided the ball back in for fellow centre-back Zeph Collins. Zeph saw his header scrambled off the line, however, the clearance fell to Eli on the left edge of the box, and he struck a sweet half-volley into the far top corner to bring the two teams level.

Following the goal, Argyle’s youngsters grew into the contest, and twice in eight minutes they created golden chances following a switch of play from right to left; Harrison King coming rescuing his team with a fantastic block in the first instance, before a loose cross broke play down when things began to look dangerous for City during the second attack.

Michael Lilley sent a low drive just wide 10 minutes before the break, however, the final moments of the half belonged to the visitors. A combination of Lilley’s and Max Edgecombe’s determination saved their team after a ball over the top of the Exeter defence opened them up, while Will Jenkins-Davies saw his free-kick well saved by Sowden.

The final opportunity of a lively first 45 minutes fell to Pilgrims winger, Jack Endacott, who volleyed just wide from close-range, but with that effort missing, it meant that the scores remained 1-1 when the half-time whistle sounded. 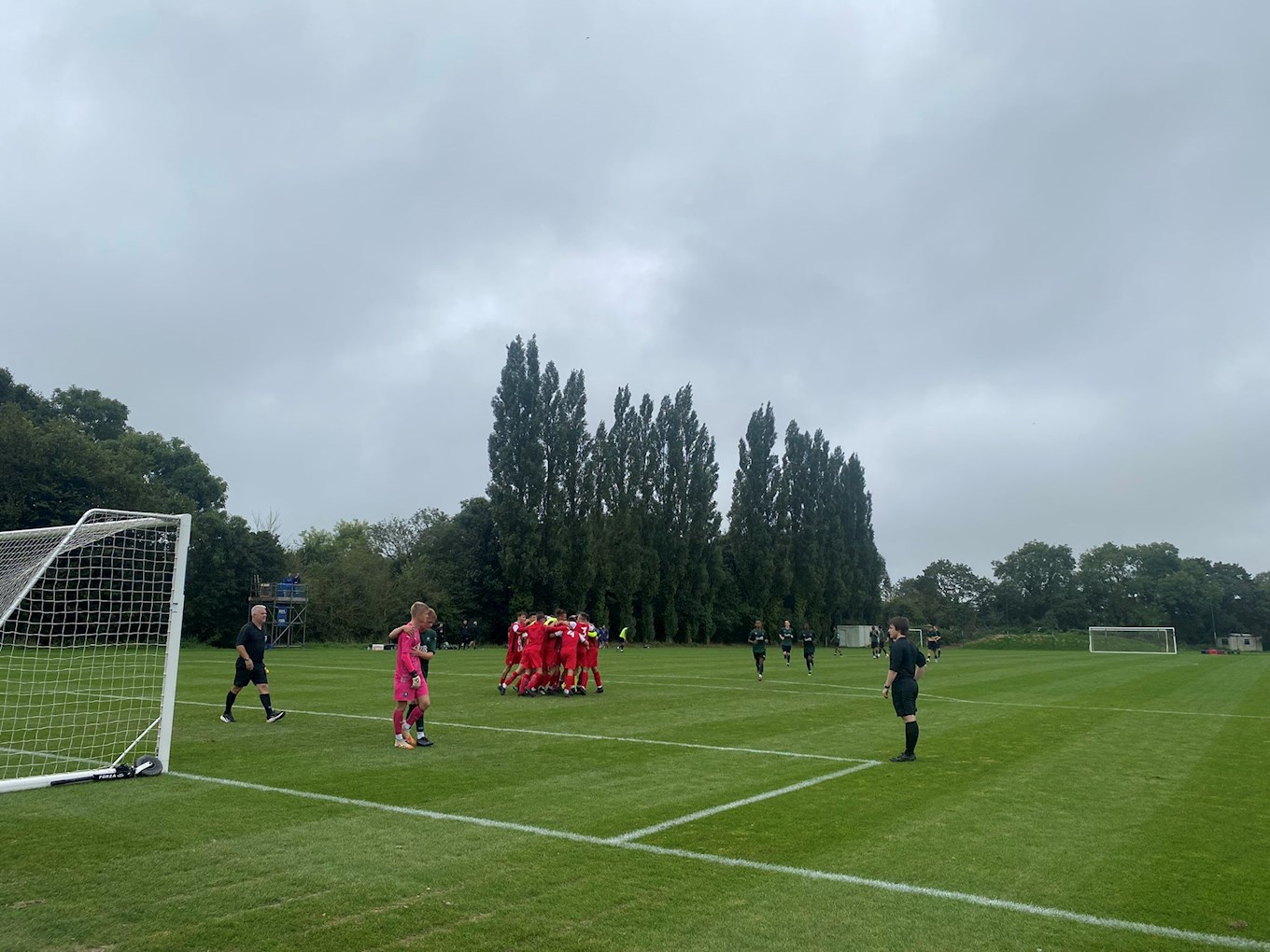 Gribble’s message in the dressing room seemed to spur his players forward in the early moments after the interval, and just a minute after the restart, Charlie Hanson saw a shot stopped by Moyle.

Beardmore headed a good chance just wide a few moments later, but the winger got himself on the scoresheet with the next attack following some superb build-up play from his teammates; Eli Collins slipped in King down the right flank, and his precise ball found Beardmore lurking at the far stick, who volleyed home powerfully to finish off a lovely move and swing the tie in his team’s favour.

Plymouth rang the changes as they searched for a way back into the contest, however, it was home striker Sonny Cox causing the most trouble on the pitch for either set of defenders, and his smart play saw Oscar Halls receive a yellow card as desperation crept into the Argyle play.

Both teams traded chances either side of the hour mark, but it was advantage Grecians with 19 minutes left on the clock, as Cox turned Halls and would have bore down on goal had it not been for the centre-half’s foul, leaving the referee little choice but to show a second yellow and reduce the visitors down to 10 men.

That instigated a positive spell for City’s youth team, and they could have sealed their place in the next round of the competition had Nevile or Cox put away their respective chances.

Instead, they paid the price as Plymouth equalised with just over 10 minutes remaining. A long ball forward saw Salawu climb highest and divert a ball onto the crossbar. With Sowden still picking himself up following his dive at the initial effort, Salawu reacted quickest and headed home the rebound to make it 2-2.

Both Nevile and Zeph Collins saw headers go off-target as Gribble’s men looked for a late winner, and, despite Argyle brushing the crossbar with an innocuous header with a few minutes remaining, the best opportunity to seal a victory in regulation time fell to Cox. Gabriel Billington played in Edgecombe, and his cross located Cox, however, the forward was unable to make decent contact with the ball, and Moyle gratefully collected the ball into his arms.

That meant with no extra-time period, the game went straight to a penalty shoot-out, and the chance to progress was down to who could hold their nerve.

After five attempts each, the scores remained level at 4-4, and as every sudden death penalty was put away with confidence, in the tenth round of kicks, the two goalkeeper’s were called upon to shoot from 12 yards. Sowden’s low save denied Moyle, before the Exeter goalie struck home his effort to send his team through to the next round of the tournament, and delight everyone associated with the Grecians.

Exeter City under-18s Head Coach, Chad Gribble: “The lads deserve a result, maybe not the one we got on Saturday, but the way we’ve played in the last three games, we were due something. We are pleased as staff for the boys as they have managed to earn something that will hopefully give them belief and confidence going forward, and puts them in a position where they can continue to trust the process.”

“I don’t think either team played to the best of their ability, and we rather cancelled each other out, but there are many ways to win a football match, and we managed to find a way, which is a trait that previous groups have shown, and something we haven’t seen before from this set of players. I’m pleased we found a different way to win.

“Our second goal was superb. There was an outstanding combination down the right, a good cross and a good finish. Those are the types of chances we haven’t scored in recent weeks, but I’m delighted for Mitch Beardmore to get that goal as it has been coming, and he has been outstanding in the last two matches. We had those kinds of moments in the second half, and Sonny Cox had a chance late on that on another day he might score, but we certainly created chances to win it. The midfield were first to everything, and that gave us the platform to build from. Credit to the players for doing what we asked of them, and the pressure we mounted onto them ultimately led to them getting a red card.

“The biggest disappointment is that we had moments to settle the game, and regain control, but because of the emotion of the game, with it being a derby, we missed chances to do that. It could’ve been a bit more straightforward, but credit to Plymouth for getting in our faces and making things difficult. Our players need to be a bit calmer and more composed, and it ended up being a game that wasn’t pretty to watch, but that was probably down to the endeavour of both teams.

“The Under-18s are representing the club in the Devon St Lukes Bowl, and we play Plymouth Marjons on Tuesday evening. I love that competition as it provides great exposure to senior football for our young players. The game provides a good opportunity against a senior opponent who are serious about winning the competition, and I have no doubt it will end up being a proper football match. We are in unfamiliar terrority, as we don’t know much about the opposition, so we need to make it about ourselves, and deny them their game, whilst trying to get into a rhythm.”