City look to continue their impressive form on Saturday with the visit of Barrow AFC.

Ahead of the game, here is the lowdown of the Club by the Cumbrian Coast.

On the Cumbrian coast lies Barrow-in-Furness and is home to the world-famous ship and submarine construction port. Ottoman Sub the 'Abdul Hamid' was built in the town in 1886 and was the first submarine to fire a live torpedo underwater. Most of the Royal Navy's ships since the Second World War have been built in Barrow. The Devonshire Dock Hall (the construction facility) is the tallest building in Cumbria.

In 1967 Barrow were promoted into the Third Tier until relegation beckoned in 1970. Two years later the Cumbrian's dropped out of the Football League.

The trophy cabinet was still being filled despite their stint in Non-league though. Twice Barrow won the FA Trophy, in 1990 and most recently in 2010 when they came from behind to beat Stevenage 2-1 at the new Wembley.

In 2020, Barrow returned to the fourth tier as National League Champions in Ian Evatt's second season in charge and finished comfortably above the drop zone in their return season.

Son of the late great Terry Cooper, Mark brings all the managerial qualities of his father to Barrow AFC. Barrow landed a coup in Cooper when the former Exeter City midfielder rocked up at Holker Street and he has immediately stamped his quality on the club.

As a player, Mark made 138 appearances for the Grecians between 1989-91 and 96=96 including being part of his dad's brilliant Division 4 triumph.

On the touchline, Cooper has an impressive football league management record. He took charge of Peterborough, Swindon and Notts County before teaming up with Forest Green, where he had previously served as a player, in 2016.

Single-handedly he dragged the Gloucestershire side into the Football League for the first time in their history, though after five years at the New Lawn, Cooper departed.

Barrow have two wins from three under Cooper's guidance, growing a sense of optimism brewing in the Bluebirds fan base.

The first Football League game played at Holker Street was against Stockport County in 1921, where 9,750 budding spectators were in attendance. The capacity record came in 1954 when over 16,000 fans watched Barrow's 2-2 draw with Swansea Town (* Now City) in the FA Cup.

Over the summer, the naming rights of the stadium switched to the Dunes Hotel.

With eleven strikes in all competitions so far this campaign, Ollie Banks is charging as a one-man army in keeping Barrow afloat in League Two. Eight goals in the league has cemented his place at the top of the scoring charts for the Bluebirds and will come to Devon hoping to improve his latest form. 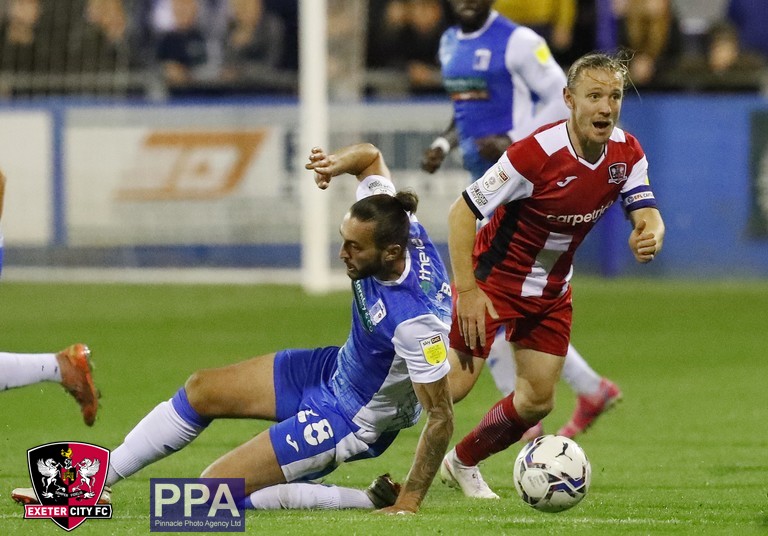 The 29-year-old journeyman began his career at Rotherham United and has spent most of his career in non-league. Spells at Gainsborough Trinity, North Ferriby Unutied and FC United of Manchester preceded a three-year stint at Chesterfield where he netted nine goals in 81 appearences.

The former Tranmere and Swindon midfielder is now enjoying his best ever scoring season on the Cumbrian coast and City defenders will have to be aware of his late darting runs into the box.

Exeter's latest win over Barrow was an impressive 7-1 victory albeit in 1972. Barrow proved tough opposition on their return to the Football League last year with a draw and a loss for the Grecians. In 20 fixtures against the Cumbrian club, Exeter have racked up 4-0's 3-0's and 4-2 victories- but the openness of Tuesday's fixture remains to be seen. Sixty-two goals have been scored since the first encounter in 1958.

The wind played its part as City were held by a stubborn Barrow side.

Matt Jay's first half strike wasn't enough, as Exeter City narrowly missed out of the post-season play-offs. Tom Beadling was on target for the visitors.

Stoppage time goals in both halves from Patrick Brough and Scott Quigley sealed the game for Barrow, as Pierce Sweeney's late volley proved too little, too late for the Grecians.

At the end of the 1971/72 season, the club finished third bottom of Division Four and required to make its eleventh re-election application.

In June 1972, they were faced in the ballot by Southern League Hereford United who had come to the nation's attention after a spectacular FA Cup success over First Division Newcastle United. The first ballot saw the votes tied at 26 each.

The second ballot saw United collect 29 votes to Barrow's 20 and, after 51 years, the Club had lost its much prized Football League status.