Matt Taylor has been named the Sky Bet League Two Manager of the Month for February.

City effort's in February saw us beat both Swindon and Harrogate despite trailing in the final 10 minutes. We also scored an injury-time winner against Leyton Orient. It all added up to 13 points from five unbeaten games, for which Matt has been rewarded.

Taylor said: “I’m proud of the way the team performed during February, our form was strong going unbeaten and picking up four straight wins, but some of the games could have gone either way and were often very close, involving late goals and dramatic scenes for the players and fans.” 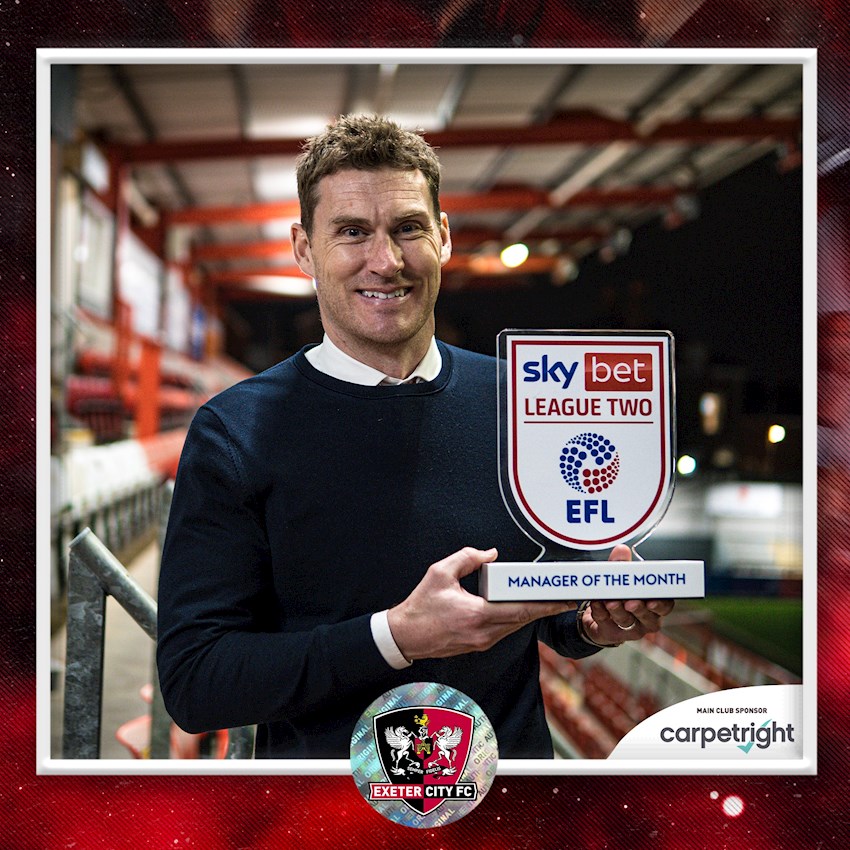 He said: “Matt and his team kept up the challenge for the Play-Off places with their 13-point return in February.

“Matt impressively guided Exeter to four wins in five games, including a great win at fellow Play-Off hopefuls Swindon and a pulsating 4-3 win against Harrogate.”

Sky Sports’ EFL pundit Don Goodman said: “February started with Exeter accepting they may have to settle for a Play-Off spot, but ended with them very much in the shake up for an automatic promotion place and a chance to avoid more Wembley heartbreak.

“Four wins and a draw in their five games in Feb will see them attack March with a renewed confidence.”

Sky Bet EFL trader Ivor Davies said: “Matt Taylor recently celebrated 200 games in charge of Exeter and his side took 13 points from five games to leave them in the automatics and into 4/6 from 9/4 at the start of the month to be promoted.

“Exeter are always one of the favourites for promotion and this year was no different as the Grecians were sent off as the 11/4 second favourites to finally get out of English football’s fourth tier.

“They are now odds-on with a dozen games left to play, and we think they are hitting form at just the right time.”