Exeter City manager Paul Tisdale says he is unsure what to expect from newly-promoted Forest Green Rovers on Saturday but warned his team that they would have to be at their best if they wanted to collect all three points at the New Lawn.

Rovers were promoted last season as National League play-off winners but they have found life in League Two difficult so far with three defeats from their opening five matches.

However, Tis says it takes time for teams to find their feet in a new division and that City have to be wary of Forest Green when you take into account the effort and commitment they showed to get promoted out of a very tough division last season.

“It is really hard to tell what to expect with a newly-promoted team because it takes time to establish yourself, find your feet and players to get their bearings,” said Tis. “It normally takes a good 10 to 12 games for those teams to find their rhythm. And they will find it at some point, hopefully, it won’t be this Saturday but they have had a really big effort over the past three or four years to get into the Football League and they are not going to squander it now, I’m sure.

City’s good start to the season has been built on a strong defensive showing. However, their last away match saw the Grecians concede three sloppy goals in a victory at Cheltenham. So, is that a concern for the City boss?

“At the moment that game at Cheltenham looks like the anomaly and I am really pleased with the three clean sheets at home,” he said. “If we want to be that promotion team that we are committed to then we have to work on some of our attacking play over the next couple of months but we have given ourselves a really good base with our defences performances and I’d like to keep that going.

City are still without Ryan Harley and Dean Moxey for the trip to Gloucestershire. However, they welcome Kane Wilson into the squad after the West Brom loanee returned from international duty. Fellow loanee Kyle Edwards and new signings Hiram Boateng and Jayden Stockley will also be available for selection.

Travelling to Forest Green Rovers on Saturday? Have a look at our travel guide

Exeter City kept their great start to the season going as they recorded 3-1 win away at Forest Green Rovers.

The Grecians were 2-0 up after 17 minutes with Pierce Sweeney and Reuben Reid finding the back of the net and then added a third, again through Reid, early in the second half.

It was a match they controlled for large parts, with superb performances by Jake Taylor and Lee Holmes on either side of midfield but the hosts gave them a nervy ending to the match as Shamir Mullings fired home with 16 minutes to play but in truth a well-organised City side never looked like surrendering the advantage.

Paul Tisdale named the same side that came through the hard fought 1-0 win over Newport County AFC last weekend at St James Park, and Dean Moxey was involved in his first matchday squad after recovering from an injury that had kept him out of the beginning of the season.

The Grecians got off to the best possible start as they took the lead just after three minutes. A Lee Holmes corner wasn’t dealt with by the Rovers defence as the ball came back into the box from Troy Brown, and an unmarked Pierce Sweeney swept the ball home for his first City goal.

Minutes later, the home side had a good chance to level things when Christian Doidge found space in the Grecians’ box, but for an important interception from Jordan Tillson which prevented him getting a shot away.

Doidge was then in again when he broke down the right-hand side, and with only Pym to beat, the City goalkeeper stood firm to block the striker’s effort from close range.

But as the rain began to pour on the City fans in the unsheltered away area, it failed to dampen their spirits, particularly when Reuben Reid gave the Grecians a two-goal cushion on 17 minutes.

After a brilliant run down the right from Holmes, who went past three Rovers defenders, before his cross rebounded to Reid who side footed home coolly to claim his fifth goal of the season.

City continued to reduce their opponents to half chances through the organisation of the defensive back line, often allowing Rovers to have the ball centrally and then looking to counter-attack.

After Toni Gomes turned well and burst into the box, Jake Taylor did brilliantly to get back and put the Rovers player off as he shot well wide.

Liam McAlinden then had another good opportunity for City, after the hassling of Jordan Tillson and Lloyd James who won possession back, but as the forward found himself some space his effort was just wide of Brad Collins’ goal.

Rovers then had a chance to strike back just before half-time after Doidge chested down a cross and volleyed over Pym’s goal, as the Grecians took a deserved two-goal advantage into the break.

City started the second half brightly with a good reverse pass from James setting Taylor up with a sight at goal from the edge of the box but his effort was well held by Brad Collins.

And two minutes later City were 3-0 up. Again it was Holmes who was the creator as he got down the right and crossed for Taylor to volley goalwards. His effort was superbly saved by Brad Collins but the rebound fell to Reid and he swept the ball home for his sixth goal of the season.

Forest Green came close to getting back in the match four minutes later though as Doidge found himself in space and he fired an effort across Pym but off the inside of the post and out.

A great chipped pass forward from James then set Taylor in on the right but as he cut the ball back to McAlinden, Manny Monthe was sliding across the front post to make it difficult for the City player to find the target.

The match was swinging end-to-end in the second half though as Forest Green committed more men forward and they went close to claiming a goal back when substitute Dan Wishart tried to place a shot past Pym only for the City keeper to block the effort with his legs.

And then the fightback was on with 16 minutes to go as Shamir Mullings found himself in on goal and he side-footed and effort past Pym and into the bottom corner.

Then on 80 minutes came a nervy moment as Scott Laird flashed an angled drive across goal and wide. However, City then responded with an effort of their own as Holmes teed up James and his powerfully-struck shot had to be punched to safety by Collins.

High demand for City's trip to the New Lawn.

Tickets are now sold out for City's trip to the New Lawn on Saturday to face Forest Green Rovers. Grecian Travel is also full for the trip.

Should there be any returns they will be released later in the week.

The away end at Forest Green Rovers is a standing terrace, with an area of this section currently closed off in preparation for some building work to take place for the installation of additional seating.

With it being a standing terrace and supporters being close to the pitch, there is nowhere to put any flags without them obscuring or covering any of the pitch side advertising, or sponsorship logos, so unfortunately flags are not permitted. Drums are also not permitted in the terrace. 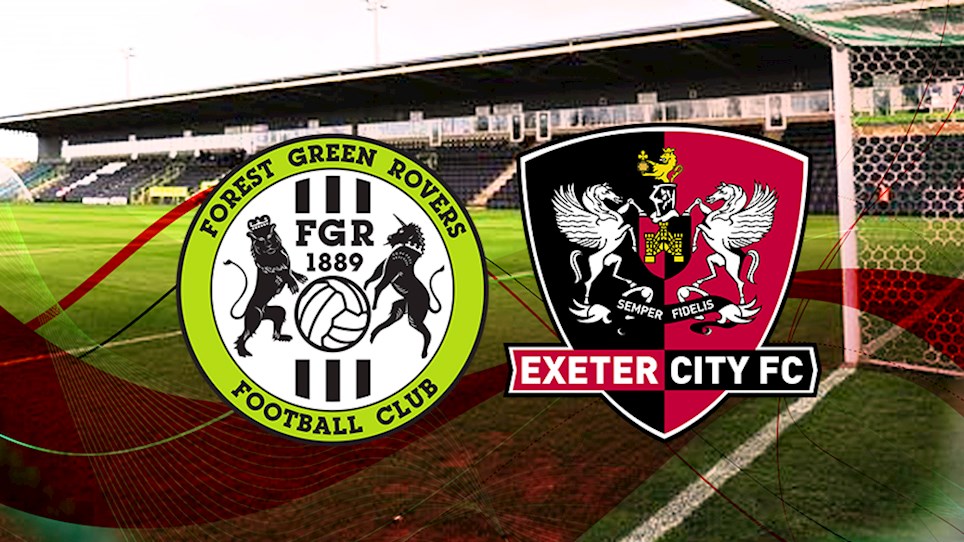 
Tickets now on sale to Gold and Silver priority members.