Exeter City got their pre-season off to a winning start with two late goals from Josh Key giving them a 3-1 victory over Bideford.

In what was the first game of Matt Taylor’s reign as City manager it was a young side the Grecians put out with new under-23 coach Dan Green taking the leading role on the touchline.

Many of the players playing had played for Green when he was under-18s manager last season and they started with a real energy and purpose with Joel Randall going close after seven minutes with a shot that the hosts just managed to scramble off the line.

Max Smallcombe and Archie Collins then hit efforts narrowly over before Ben Seymour – who scored more than 20 goals for Bideford while on loan to the Southern League side last season – won penalty in the 33rd minute. 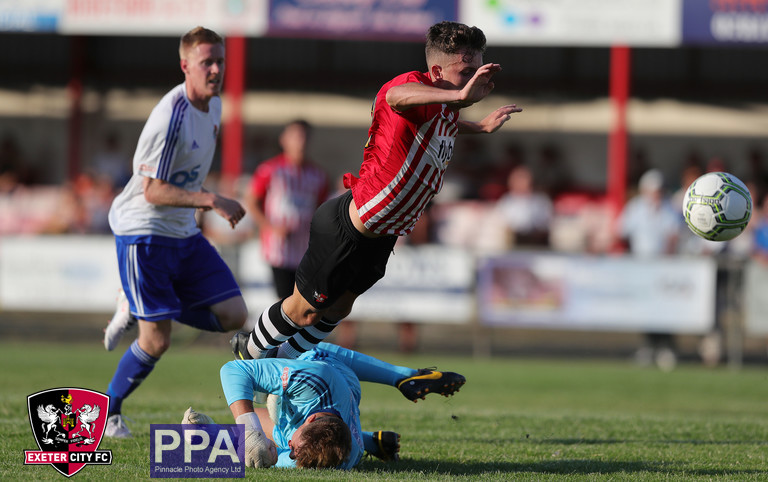 Ben Seymour being tripped by Felix Norman in the box

The pacey striker latched onto a good through ball and attempted to take the ball around Felix Norman. However, the City goalkeeper – who was standing in for Bideford first-choice keeper for the first 60 minutes of the match – brought him down. Seymour dusted himself down and fired the spot kick to the keeper’s left for the opener.

However, having got themselves in front, City went to sleep from a corner two minutes later as James Mayne sent a free header past James Hamon.

City began the second half brightly, with Norman saving a curling shot from Randall before Alex Hartridge glanced a header narrowly wide.

However, back came the hosts as Nail Heaney brought a fingertip save out of Hamon before Sean Downing scooped a good chance over from eight yards.

Norman then switched from keeping goal for Bideford’s to saving shots for Exeter after the hour mark, turning a powerful Downing effort over his crossbar.

And with 12 minutes to go Key put City in front as he curled an effort into the bottom corner from inside the box. Norman then had to stand tall to save another fiercely-struck shot by substitute Kevin Squire as the hosts searched for an equaliser. However, Key made sure there was to be no comeback as he added his second, with a close-range back heel, to secure the victory.