Exeter City will be looking to bounce back from last weekend's defeat to Grimsby Town as they travel to face second placed Crewe Alexandra at the Alexandra Stadium on Saturday, October 5 in a 3pm kick-off.

Ryan Bowman's late strike against Grimsby meant that the Grecians kept top spot in EFL Sky Bet League Two by virtue of a single goal. Saturday's match against Crewe Alexandra is set up that a winner would move three points clear at the top of the league - so all is to play for.

Ahead of the match, City manager Matt Taylor said: "They've started well and we are on the same points so there isn't much to separate the teams. Hopefully it will be a good day for football in terms of the weather conditions and the pitch. It's certainly a game you have to look forward to."

The Grecians come into the match first in Sky Bet League Two having picked up 22 points from their first ten matches of the season. City did suffer their first defeat of the season last time out against Grimsby Town and will be looking to bounce back.

As for Crewe, they sit second in the table, also with 22 points but behind City by one goal. Last time out they drew 1-1 with Cheltenham Town. 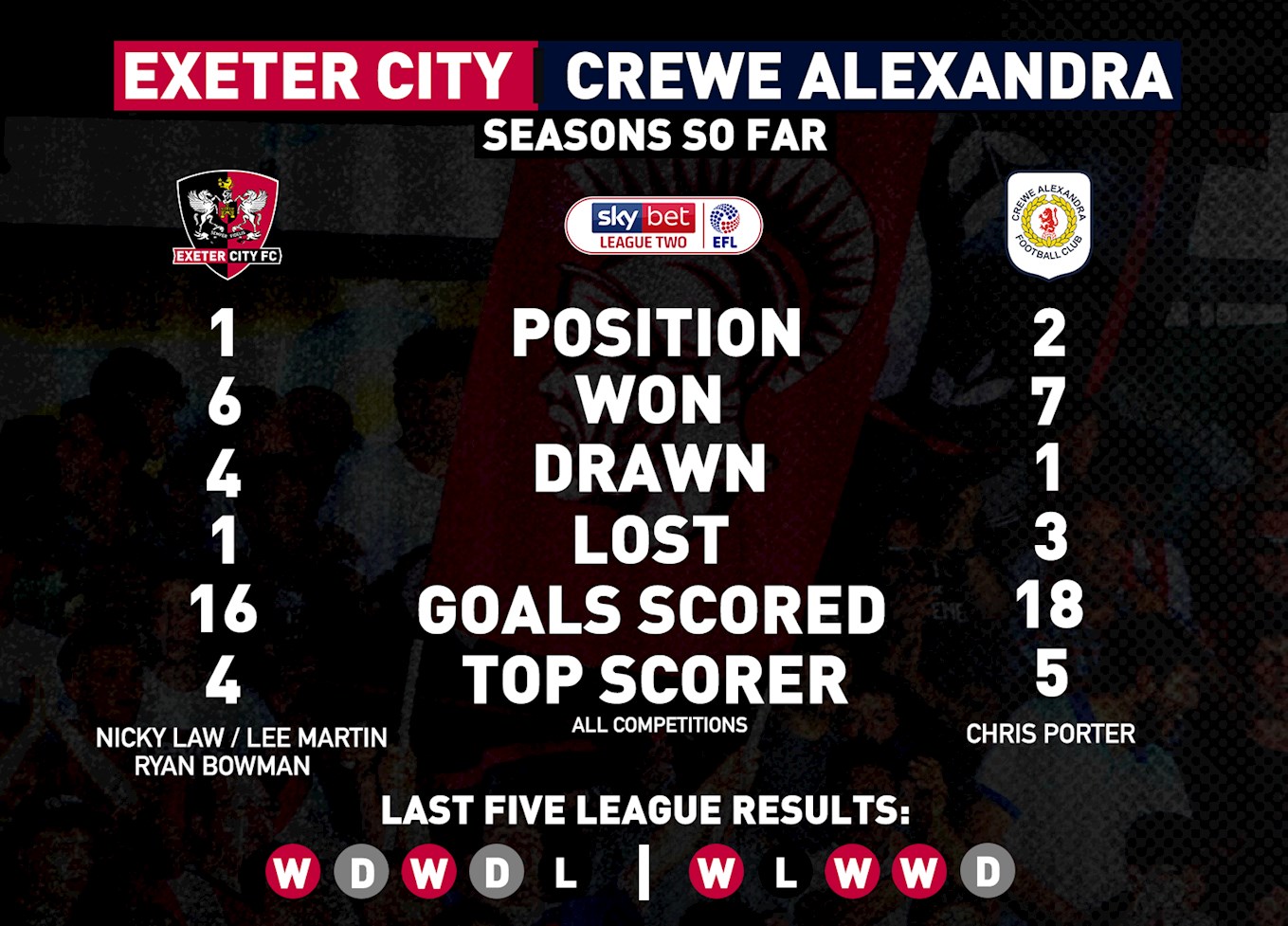 Ahead of the match, Crewe manager David Artell was full of praise for Matt Taylor and Exeter City, he said: "Exeter are a good team and they have a very good manager in Matt. They have a stable board and a good board.

“They are a club build on stability now. They had a very good manager in Paul (Tisdale) and they have another one now. Matt has been able to put his own ideas over. They have lost some good players since he took over, but they have overcome that and are top of the league on merit.

“It is a tough assignment for us this weekend but make no mistake about it, we want to win the game and go to the top of the league."

Exeter City picked up all three points with an excellent 2-1 win over Crewe Alexandra back in February. The Grecians went ahead through Jake Taylor's deflected effort early on before Chris Porter headed home just after half-time. But Matt Jay netted his first league goal of the season when he popped up with an excellent curled effort to give the Grecians all three points.

Advance tickets are on sale for City's trip to the Alexandra Stadium and can be purchased in advance by clicking here. Tickets can also be purchased from the club shop until midday on Friday, October 4.

Advance Discounts? No
Ambulant: Pay age related price and carer free
Wheelchair: Please contact Crewe directly on 01270 252610
Matchday Purchase available? YES, from the away ticket office next to the turnstile (from 12pm).

To book your spot, please click here, or drop into Reception at St James Park.

Use the M5 and M6 before taking exit 16 from the M6. Then use the A500 to get into Crewe and follow the B5071 to Gresty Road, where the ground is located. At the ground behind the main stand there is parking for 560 cars that costs £3.50, however this will fill quickly on match days.

You can take the 08:24 train from Exeter St. David’s up to Birmingham New Street where you need to change to get the train to Crewe. This should have you there for 12:07. It is just an eight-minute walk from the station to the stadium. You can return to Exeter on the same day by picking up the 18:33 train from Crewe before once again changing in Birmingham and getting the train back to Exeter from there which will have you back in Devon for 21:44.

If you arrive early, the supporters’ club will allow small numbers of away fans to enter. There are a selection of pubs nearby such as the Corner Bar at the Royal Hotel, the Cheshire Inn and the Brunswick which are all quite close to the stadium and will welcome away fans.

The Alex Suite can be found adjacent to the Whitby Morrison Stand, and opens from 12noon for Saturday fixtures and 5.30pm for evening games, showing live Football from BT and Sky Sports.

A selection of hot and cold food is also served inside, with vegetation options and pre-match alcoholic drinks available. The matchday programme is also available to purchase from behind the bar. Both home & well-behaved visiting supporters are welcome pre-match in the Alexandra Suite.

Click here to find out all you need to know about visiting the Alexandra Stadium.

The total distance between St James Park and the Alexandra Stadium is 211 miles which would take just under four hours to drive.

It was a case of two points dropped for Exeter City at Gresty Road as we were held to a 1-1 draw by Crewe Alexandra.

The Grecians took an early lead when Dean Moxey converted an Archie Collins cross to the back post after only two minutes but, following a host of missed first half chances, Crewe Alexandra got back into the game second half and equalised through substitute Chuma Anene.

Manager Matt Taylor named an unchanged side for the third league game in succession, while Crewe made two changes bringing in Owen Dale and Olly Lancashire for Perry Ng and Dan Powell.

Both sides went into the game with confidence having started the season well. City, having lost just one of their 11 games going into the match sat top of the table but level on points with Crewe at the summit.

However, it was the Grecians who looked by far the better side in the first half having taken an early lead. The goal came from a second-minute corner that was played to Archie Collins to cross into the box where Dean Moxey volleyed home at the back post.

That set up a good attacking first half performance from the Grecians, with only the finishing touch missing. They had a good chance to double their lead on 19 minutes when Lee Martin latched onto a Nicky Law ball in the box but his closed-range shot was blocked by Will Jaaskelainen.

Four minutes later and another guilt-edged opportunity went begging as Collins' volley from the edge of the box was blocked by a defender and fell at the feet of Ryan Bowman who fired over from eight yards out.

Moments later Lee Martin had a penalty appeal turned down before then curling a shot goalwards to bring another good stop out of Jaaskelainen.

The chances kept coming for City though as Tom Parkes headed just wide from a Collins cross and then Bowman hit an effort straight at the Crewe keeper from a Lee Martin pass.

So it was with great frustration that Grecians didn’t go into the break more than a goal to the good, but City looked to be continuing their good form into the second half when Jack Sparkes let fly from 25 yards to bring another save out of the Crewe shot stopper.

However, as the game approached the later stages City began to get sloppy in possession and invite pressure onto their goal. Lewis Ward produced a good stop to deny Harry Pickering just after the hour mark and then blocked another effort from Tom Lowery from close-range.

So, with 15 minutes left, when another ball went into the box City’s luck ran out as Dean Moxey’s headed clearance ricocheted into the path of Chuma Anene and he found the bottom corner to give the hosts a share of the spoils.