Exeter City Women suffered more cup competition disappointment on Sunday, as they were beaten at Cheltenham in the League Cup Plate Quarter Final.

The Grecians started the contest in the best possible way, Emily Toogood’s free kick bounced around the penalty area and as the ball dropped to Steph Beck, she guided the ball into the bottom corner for an early lead. Unfazed by the goal, Cheltenham almost hit back immediately. A free kick on the City left was headed towards goal but kept out by a brilliant reach from Abbi Bond, who tipped the ball onto the crossbar. As the ball rebounded down the follow up was wide. 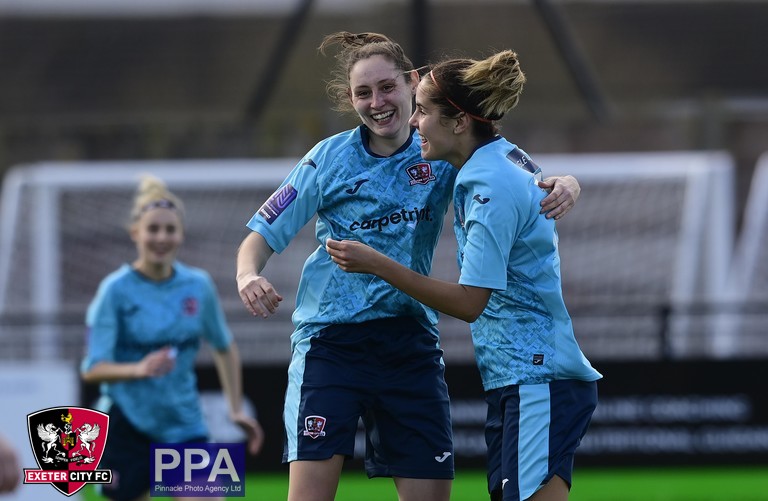 Sarah Stacey, returning after a two week absence, charged down a clearance and was presented with a one on one opportunity, her shot narrowly over the bar as the two teams traded chances. Mollie Taylor then twisted free of her marker and tried from distance, the shot just wide. With key players already absent, the one thing Abbie Britton and Aaron Wakley did not need is another injury to a key player, sadly Captain Manfy Sharpe succumbed to a persistent knee injury on the half hour mark and was replaced.

Connie Pengelly tried an audacious effort from distance, the fiercely struck effort clipping the top of the Cheltenham crossbar as City looked to extend their lead, but moments later the game was level. The home sides threat had consistently come from Lacy-Jai Liggett and, as City failed to clear their defensive lines, she weaved in between defenders and drilled the ball home at the near post with an excellent individual goal.

City responded with an effort from Mollie Taylor, her shot was well blocked by the Town defence, an effort that resulted in a goal kick and not the actual corner kick it should of. Sadly, for the sake of both teams, this was not an afternoon where the officials shined. Half time and all to play for.

A cross from Toogood, headed towards goals by Stacey, was the bright start the Grecians were after, Steph Beck sending in another cross moments later that was claimed by Aimee Watson in the Town goal. However, with Liggett now beginning to find more space, Cheltenham would begin to dominate. Liggett ran at the City backline and, despite initially looking to have been forced wide, her shot squirmed under Bond and gave Town the lead.

The following twenty minutes was an onslaught that City had to survive.  Emily Toogood made a brilliant sliding block to prevent Liggett the hat trick, before Jaydee Seaman made another last ditch block to deny Cheltenham extending their lead. Abbi Bond tipped a header over the bar and then was to the rescue again as she got fingertips to another effort on goal. 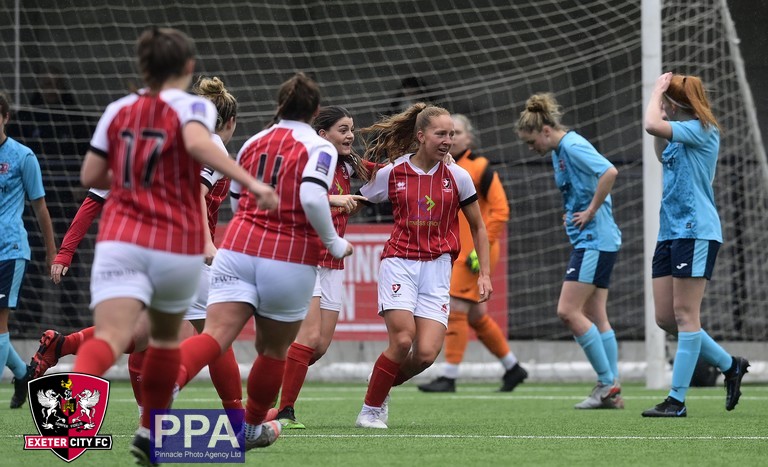 With the excellence of Bond and sheer determination and fighting spirit of Jaydee Seaman keeping City in the game, with ten minutes remaining the chance was there to force the tie to a penalty shootout. However, the second half of this game felt as though it was one big performance too many for a team that have put in some huge efforts over the last two months. There was to be no customary big City finish, as tiring bodies could do little do prevent a team so accustom with seeing out narrow games, doing so effortlessly.

The focus will now turn to league football, after only one league fixture in the last three months, and the opportunity to bounce up the division with the next three games all against sides currently in the bottom three. Disappointment on the day, but with City having a great deal of football left to play, the hope will be that when they visit Gloucester again in April there will be the potential for a game with plenty resting on its outcome.