Each summer every fan sits nervously waiting for that day in early August when, finally, the football season can kick off again.

After three long months of frantically scanning the darkest corners of the web for any shred of transfer gossip, they can pile back into the terraces and get down to the serious business of supporting their clubs.

The Grecians came up against Cambridge United in the opening day of last season at St James Park as they made a winning start to the campaign.

After thrashing Dorchester Town 6-1 in a pre-season match just a few days before, Paul Tisdale named the same starting XI. It was the perfect start to the season when the Grecians went ahead five minutes in after a long ball from Jordan Moore-Taylor towards David Wheeler causing havoc in the United box as Jake Carroll handled the ball, leaving referee Trevor Kettle with little choice but to point to the spot.

David Forde then saved Reuben Reid’s penalty but was unable to push the ball clear as the now former City striker pounced to fire in the rebound. Liam McAlinden looked threatening for much of the afternoon and had a shot go over Forde’s goal in a tight match at St James Park. Luke Berry and Jabo Ibehre looked the most likely for the away side, but were limited to little in front of goal with Christy Pym and his defenders doing well to keep out United and hold onto the win. 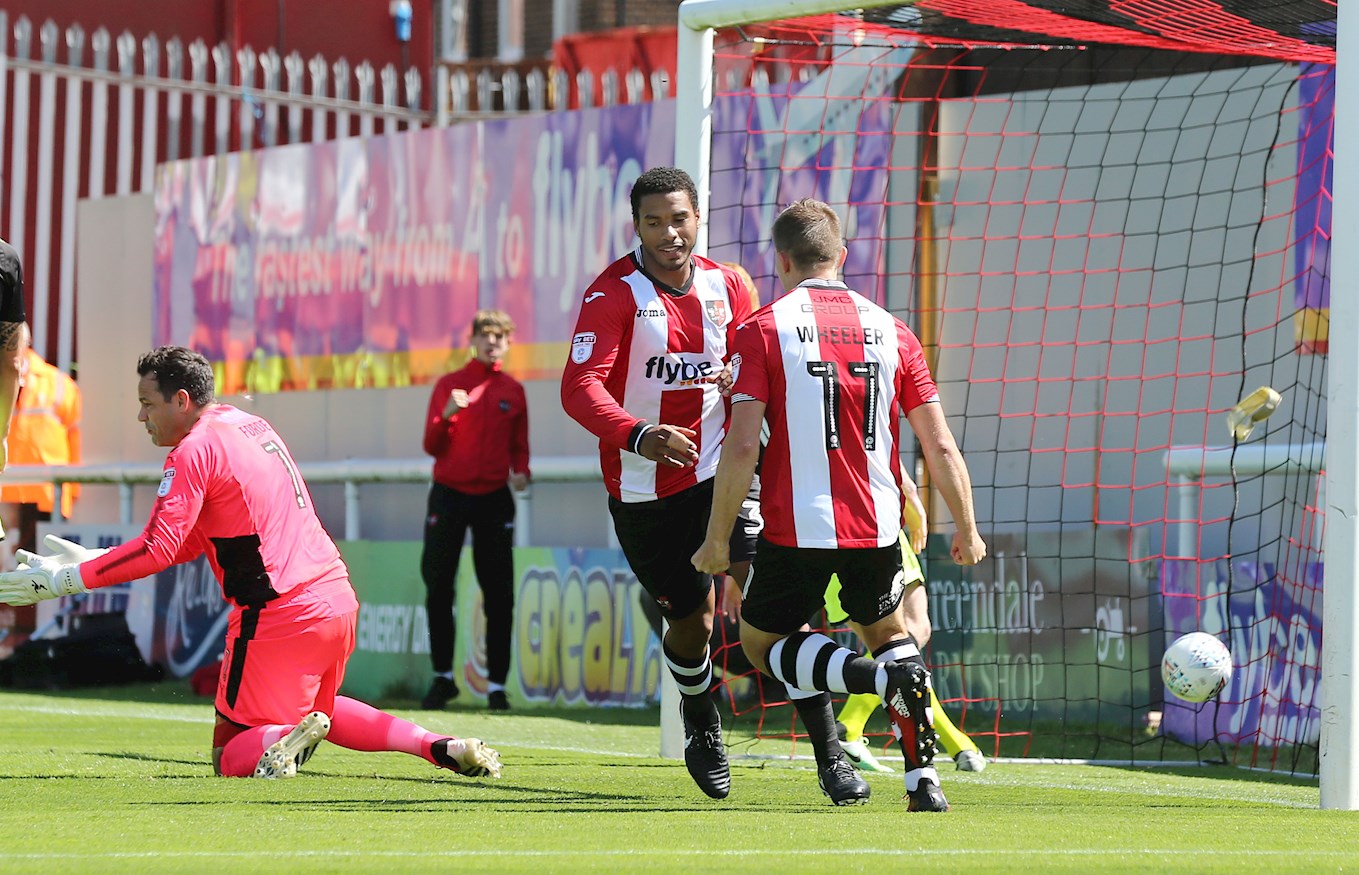 Having opened their previous four campaigns at home, the Grecians were finally sent on the road, beginning their 2016-17 season away at Blackpool. With the Seasiders having endured successive relegations they were clearly aiming at a fresh start, including five debutants in their starting line up.

As the second half progressed, many around the ground began to feel that it was not going to be the Grecians day, with Blackpool keeper Sam Slocombe producing a number of fine saves to preserve his side’s lead. City’s misfortune was effectively summed up 10 minutes after the break when Troy Brown accidentally diverted a cross past his goalkeeper to double the Seasiders’ lead and ensure that Exeter would have to make the long trip home empty handed.

This result began an extremely poor run of form for City, both home and away. However, finding themselves at the bottom of the table in late December, they began a remarkable run of form that saw them rise to fifth by the end of the season.

Having despatched Carlisle in dramatic fashion over two legs, they sadly fell at the final hurdle, losing the play-off final 2-1 to Blackpool, a full nine months after the teams had initially met at Bloomfield Road. 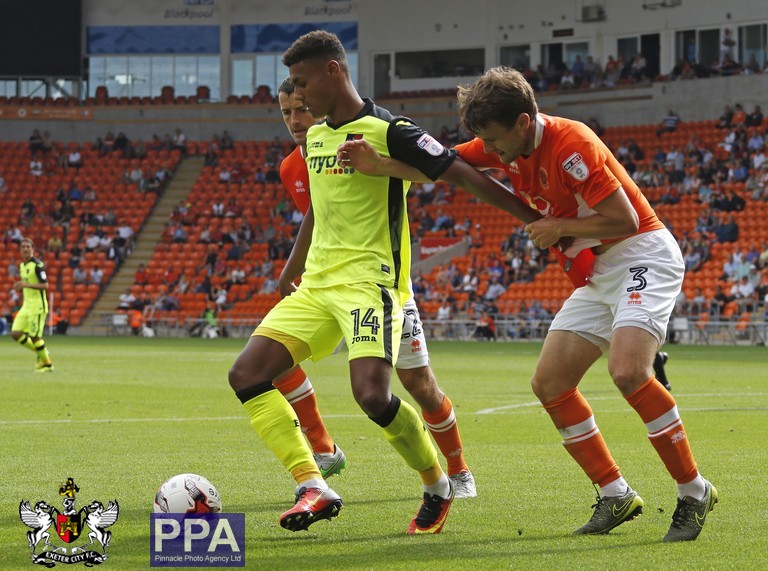 City kicked off their 2015/16 campaign with a game against local rivals, Yeovil Town.

Although west country derbies are renowned for their hard fought, competitive nature, this particular fixture was marked by a show of solidarity. Occurring just two days before the 5th anniversary of the tragic passing of former Glovers and Grecian striker Adam Stansfield, rounds of applause were held in the 7th and 9th minutes, reflecting the numbers that he wore for both clubs respectively.

Upon the resumption of hostilities, City were undoubtedly the brighter team, with Tom Nichols constantly menacing Yeovil’s defence. They finally took the lead on 31 minutes, after Connor Roberts dragged Alex Nicholls down in the penalty area. Nichols stepped up and slotted the resulting spot kick, sending the keeper the wrong way.

City doubled their lead just 10 minutes later when David Wheeler raced clear of the Glovers’ defence, and placing his body on the line, prodded the ball under the onrushing Chris Weale.

However, much as in the previous season, City began the second half lethargically and were immediately made to pay. Just a minute after the break, substitute Harry Cornick hit a lovely shot on the turn, past the despairing dive of City keeper Bobby Olejnik.

Twenty minutes later, the situation worsened for the Grecians when the lively Cornick went down under a soft challenge from Christian Ribeiro, prompting angry shouts from the Big Bank. Ignoring the protests of fans and players alike, the referee awarded Yeovil a penalty, which was dispatched calmly by midfielder Matt Dolan.

Their perseverance paid off just six minutes from time as debutant Will Hoskins latched onto a Matt Oakley through ball dinking it over Weale, and ensuring City a winning start to the season.

Once again, however, the Grecians were unable to push on from their dramatic opening day win, ending the season with a lowly 14th placed finish.

Opening day 2014 saw fellow South Coast side Portsmouth make the three hour trip along the A35 to St James Park, taking on an Exeter side containing the young prospects, Matt Grimes and Tom Nichols. With both teams having finished the previous campaign languishing nearer the bottom half of the table, it was clear that both sides wanted to start their new seasons on a positive note.

During the first half, City had the lion’s share of the play, creating several clear cut chances. They were eventually rewarded on the half hour mark, when Craig Woodman’s deflected cross reached an unmarked Nichols, who smashed the ball into the bottom corner with a venomous half-volley.

After half-time however, the momentum shifted as Pompey began to take control of the game. Having been brilliantly denied by City keeper Christy Pym on a couple of occasions, they equalised through Jed Wallace in the 74th Minute, ensuring that the spoils were shared.

Following the game, Pompey manager Andy Awford reflected on a game of two halves, telling that BBC that: “It was a lot better second half and that's the standard that we expect. In the first half we haven't hit those heights but we've managed to stay in the game which was important."

A solid result on the opening day saw a much improved league performance throughout the 2014-15 season as the Grecians finished 10th once again, seven points short of their rivals Plymouth Argyle who occupied the final Play-Off place. 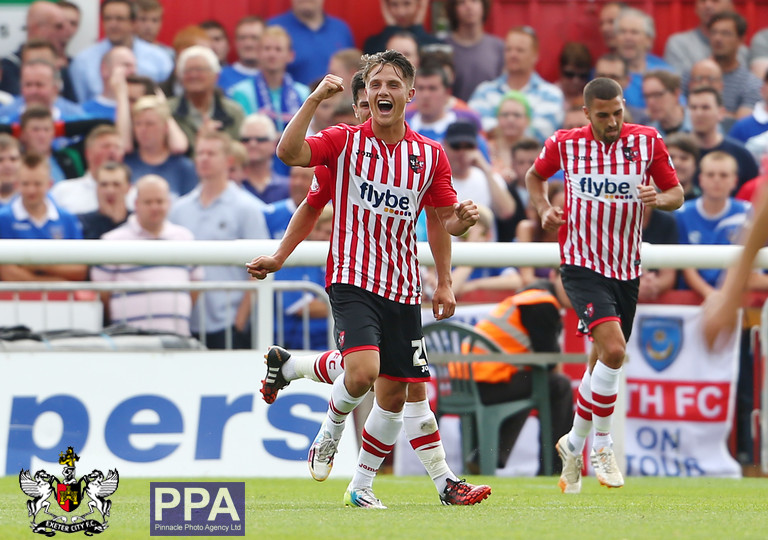 The curtain raiser to the 2013-14 campaign saw City pitted against local rivals, Bristol Rovers. The Grecians’ starting line up had a fresh feel two it, with the inclusion of new signings David Wheeler and Sam Parkin. The Gas, on the other hand, were coming off the back off an injury plagued pre-season and were, as such, unable to name a full complement of substitutes on their bench.

City dominated the first half, creating a number of chances. Parkin in particular looked a threat, heading just over from an Arron Davies corner. However, with Exeter unable to convert their openings, the two sides traipsed in at half-time level at 0-0.

As feared, Rovers began the second half with more determination, threatening Krysiak’s goal on several occasions. It was, however, the Grecians who broke the deadlock after Craig Woodman, atoning for his howler the season before, swung an inch-perfect cross onto the head of captain Danny Coles, who converted with ease.

On 68 minutes, the Gas struck back with a corner of their own. Although City had dealt with the initial delivery well, forward Ellis Harrison pounced on the clearance, crossing the ball into the path of his strike partner Eliot Richards who levelled the scores with a neat side-footed finish.

Although the goal came as a blow, City continued to fight and were rewarded just ten minutes from time as Parkin capped an impressive debut performance with a stunning diving header to seal all three points for the Grecians.

Unfortunately, in spite of this dramatic win, it was to be a disappointing campaign for Exeter as they finished their second season in League Two in sixteenth place. 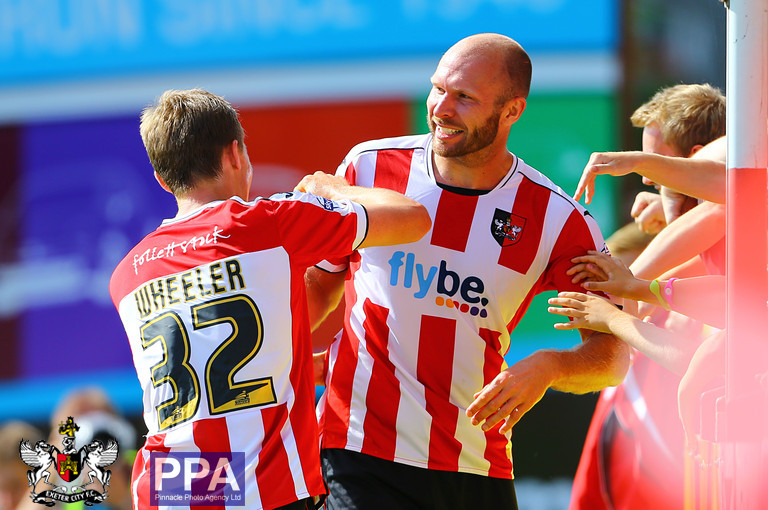 Exeter City endured a difficult start to their 2012-13 campaign, suffering a 3-0 reverse at home to Morecambe. Played on a hot, sticky mid-August afternoon, the atmosphere surrounding St James Park was initially one of hope, with City naming a strong line up, including the likes of Liam Sercombe, Matt Oakley and Jamie Cureton.

Although the game began on a fairly even keel, City quickly found themselves hamstrung by the defensive frailties that had plagued them the previous season.

The Shrimpers opened their account in the 13th minute, when debutant Craig Woodman rolled a back pass into the path of midfielder Andrew Fleming, who slotted the ball into the net with ease.

Their second followed just ten minutes later, when the City defence halted, expecting an offside call, allowing Morecambe to stream forwards. Although Artur Krysiak dealt with the immediate danger, he shanked his clearance to Fleming, who gratefully accepted the gift, chipping the stranded keeper to secure a brace.

The Shrimpers’ third was an equally soft touch. Bisected by a routine through ball, the Grecians’ centre-backs were left helpless as Izak Reid fired the ball past Krysiak to complete a first half rout.

Thankfully, following this result, City’s form improved drastically, as the team went on a six game unbeaten run. In spite of this, however, they were unable to bounce back into League 1, finishing five points outside of the playoffs in tenth. 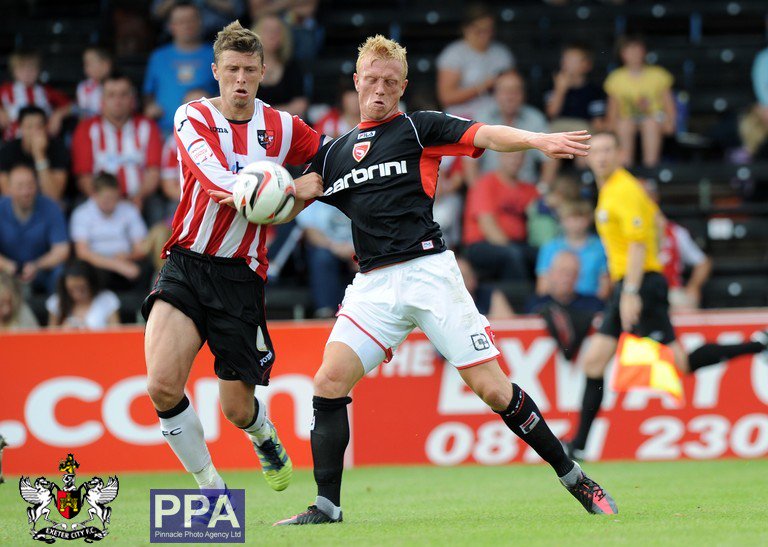 Here are the quick links to things you might have missed: