Exeter City continue their season at home to newly-promoted Lincoln City on Saturday.

The Imps, managed by Danny Cowley, won the National League last season with a total of 99 points and were also the first non-league side since 1914 to make it to the FA Cup quarter-finals knocking out Premier League Burnley along the way.

Speaking about the prospect of facing Lincoln City at home, City manager Paul Tisdale said: "It is a fresh challenge. We haven't played them for seven or eight years.

The IP Office Stand is sold out for the match against Lincoln City, meaning there is only standing tickets available in the Thatchers’ Big Bank.

Tickets should still be available to purchase, for the Thatchers' Big Bank on the day, but the club is advising that supporters buy tickets in advance to avoid disappointment. You can do this by clicking on the following link and then collect your ticket from the ticket booth in Red Square on matchday.

Hospitality is also available for this and all home fixtures at St James Park, from as little as £30 (including the matchday ticket). To enjoy the match in style email commercial@ecfc.co.uk or phone 01392 413957.

Thank you to our match sponsors, Thatchers Cider, and our ball sponsors Heavitree Brewery.

For more information on Thatchers visit the following page.

For more information on The Heavitree Brewery company visit the following page.

We have an extensive range of sponsorship opportunities. For more information contact Jake Wood at Exeter City at jake.wood@ecfc.oc.uk.

The Grecian is back for issue three of the season on Saturday as Exeter City welcome Lincoln City to St James Park.

This game, Liam McAlinden is the feature interview as he talks to club journalist Ben Strange about a big season ahead for him and the club as they aim to go one better than last campaign.

Martyn Rogers, a City legend who was part of the 1980/81 side that reached the quarter-finals of the FA Cup, answers our first, best and worst football moments quiz, while there are comprehensive travel guides for our upcoming away matches at Cheltenham Town and Forest Green. 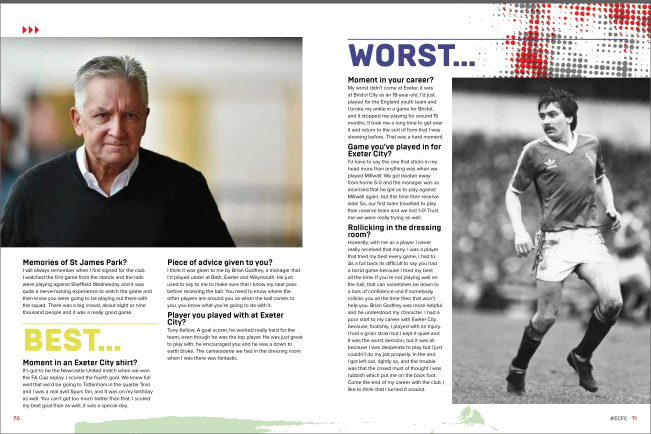 There are all the usual opposition features as well, along with the regular contributions from Tony Morris, the Bard of ECFC, BBC Radio Devon’s Alan Richardson and Charlie Howell.

You can pick up a copy of The Grecian for £3 from the club shop and reception and around the ground.

Our mascots for today’s game are the following:

The City striker's excellent first-half goal was the difference between the two sides as the visitors put up a stern test for Paul Tisdale’s men.

The Grecians made three changes to the side that drew 1-1 with Swindon Town last time out as Luke Croll, Troy Archibald-Henville, and Jake Taylor replaced Jordan Moore-Taylor, Lee Holmes and David Wheeler.

In a first half which didn’t have too many clear chances for both teams, the away side had their first opportunity after six minutes. Neal Eardley’s dangerous cross from the left was inches from Matt Green, as City goalkeeper Christy Pym came out to claim well.

Lincoln then had another good opportunity a couple of minutes later when Green burst down the right to get in behind the City backline. The ball then fell to Michael Bostwick on the edge of the Exeter box, but his effort from distance did little to worry Pym.

Much of the first 20 minutes saw the Grecians struggle to gain a foothold in possession as Danny Cowley’s side kept much of the ball, though were unable to force any clear-cut chances as the City defence battled well.

Paul Tisdale’s side had their first real attempt on goal on 25 minutes after a good passage of play from the Grecians.

Taylor did well to work the ball inside with Pierce Sweeney and drive into the area, but his effort sailed just over Paul Farman’s goal.

Lloyd James then had another effort shortly after for City, who were beginning to strengthen their foothold in the game, but he was unable to keep his low driven effort on target.

More half chances fell for the visitors, and the likes of Green, with the away side again dominating possession towards the end of the first half, but it was City who went ahead three minutes before half time after a fabulous strike from Reid.

On the counter-attack, which proved a regular tool used by Tisdale’s men, Liam McAlinden did well to square it to the City striker to fire into the top corner from a tight angle to register his second goal of the new campaign.

Lincoln were then inches from levelling the match just moments later when a close range free-kick from Jordan Maguire-Drew sailed inches wide of Pym’s post, meaning City went into the break one goal to the good.

The second half took just minutes to liven up with Sweeney going close to doubling City’s lead. After the ball was headed out of the Lincoln box the Irishman’s half-volley from distance was goal bound but for Farman’s intervention to punch over.

Green then had Lincoln’s first chance of the half moments later when he turned in the box to fire a shot towards goal, but for the onrushing City defence, who blocked bravely for a corner.

Both sides then made changes on the hour mark as Holmes replaced Archibald-Henville, who proved excellent in breaking up the Lincoln play in the centre of the pitch.

Substitute Ollie Palmer then almost levelled things immediately after coming on as his effort at goal from close range was, again, blocked bravely by the City defenders.

McAlinden then had an excellent chance in the Lincoln box after finding space thanks to good work from Reid, but the City number 19’s chip towards the back post edged just over Farman’s goal.

The away side then had a couple of good opportunities to test Pym, when Palmer had another shot blocked well by Luke Croll, and Bostwick’s driven free-kick was straight at the City wall.

Determined work from McAlinden then almost saw him rewarded after he won the ball back from the Lincoln defence. The forward then did well to cut in onto his left foot and strike at goal but Farman collected easily.

Reid then had another golden opportunity for City, set up by Jack Sparkes who was introduced for the injured McAlinden. The youngster, who was making his St James Park debut, jinked his way past two players to tee up Reid whose left footed shot sailed just over the crossbar.

Tisdale then introduced Matt Jay from the substitutes bench for the remaining five minutes of the 90, as the Grecians looked to close out the victory against a Lincoln side who were keen to get the ball forward.