Exeter City will welcome back Dean Moxey and Jordan Tillson into the matchday squad for Saturday’s trip to Yeovil as they look to pick up their first win on the road since October 7.

The Grecians, who have the joint-best home record in the top four divisions of English football in 2017, have suffered on the road of late losing away at Colchester United and Crawley Town with performances that manager Paul Tisdale was less than pleased about.

However, they will be boosted ahead of Saturday’s game by the return of Dean Moxey and Jordan Tillson, who were both ruled out of their last game – a 2-1 victory at home to Stevenage – through injury and suspension.

Tis is pleased to have an almost full-strength squad as they head into a busy Christmas period that sees them play four games in 10 days.

“We have not got everyone fit, but we have got most fit and we will need that over the 10 days,” said Tis. “It is a really important period, with very little time to recover and you need a good squad and we have got one.

“Yes, there are one or two players missing but I will imagine Dean Moxey will be fit and ready to go after his injury last week and Jordan Tillson is back from his one-match suspension. I think we are in a reasonably good position.”

City have a good record away at Yeovil Town recently, winning three and drawing two of their last five games at Huish Park. However, Tis was wary that, while their recent record is good, he knows they are always in for a tough match when they play the Glovers.

“It is funny you should say that because if you had asked me that question, about how successful we had been at Huish Park, I wouldn’t have I have had it in my mind as a place we do particularly well at,” he said.

“We always have a very competitive game of football when we play there. Yes, it is a while since we have lost there (since 2010), but there have been plenty of draws. And, I think, that is the overriding factor. It has been a fixture where there has been one-goal in it probably most of the time.

“It always seems to be a very tight, competitive match whether that be when Darren Way or Terry Skiverton who has been in charge of the team. It has always been a competitive match and I would expect it to be the same this year.”

Exeter City fell to a 3-1 defeat away from home against Yeovil Town at Huish Park in Sky Bet League Two.

A first half goal from Jake Gray gave the home side the lead before Francois Zoko struck to put the Glovers further ahead.

Jayden Stockley then pulled one back for City, but a Sam Surridge penalty confirmed the win for the Glovers as City slipped to another defeat on the road.

Paul Tisdale named the same side that started the 2-1 win over Stevenage last weekend at St James Park, with the Grecians looking to get back to winning ways on the road.

The Grecians dominated possession for the first ten minutes of the match, but despite playing some good football in the middle of the pitch, they were unable to create any clear-cut chances.

City created their first meaningful opportunity on 16 minutes and almost went in front through Liam McAlinden. After a short corner was worked well by Hiram Boateng and Lloyd James, the latter’s cross was headed on by McAlinden forcing Artur Krysiak into a smart save.

Moments later, Craig Woodman had an effort from the edge of the box well saved by Krysiak as City pushed to go ahead.

The Glovers had their first attempt on 20 minutes when Jayden Stockley was dispossessed in the middle of the field, before the hosts broke through Otis Khan whose cross was headed straight at Christy Pym by Francois Zoko.

Matthew Worthington had Yeovil’s next attempt five minutes later when the ball broke from a Town corner to the midfielder on the edge of the box. Thankfully, his powerful shot edged just wide of Pym’s goal.

Troy Archibald-Henville then made a vital block for City after the home side broke at pace through Sam Surridge. After the forward burst into the box and pulled the ball back, Khan arrived to shoot but for the important block by the central defender as Yeovil began to threaten more as the half wore on.

And it was the home side that would find the net first, on 42 minutes, after James played a dangerous ball across goal which was intercepted by Jake Gray, who curled an effort inside Pym’s left hand post.

City were then denied just seconds before half-time when a goal line scramble eventually led to Jake Taylor firing an effort at goal but for a brave block as the Grecians finished the half with a flurry of corner kicks.

The Grecians got off to the worst possible start after the break as they fell further behind just two minutes into the second half. A ball down the right found its way to Zoko who fired in past Pym from a tight angle to double the Glovers’ advantage.

With the home side in control, City looked to the substitutes bench as Reuben Reid and Kyle Edwards both came on as the Grecians looked for a way back into the match.

In fact, it was Reid who had City’s first meaningful chance of the half just after the hour mark when he was played in by Jake Taylor, but the striker’s shot from a tight angle was saved down low by Krysiak.

City then began to see much more of the ball, but were being reduced to half chances by a resolute Town back line, with often the final ball letting the Grecians down.

Pierce Sweeney then stopped Yeovil from grabbing a third when he cleared off the line after Khan’s effort, which was initially blocked by Pym, look destined for goal but for the City defender who mopped up well to clear.

But the Grecians gave themselves a lifeline on 84 minutes when they worked it well as Taylor’s shot was palmed away into the path of Stockley who fired in to narrow the deficit.

City’s chances of getting back into the match were then dealt a final blow just three minutes after they had scored. As Zoko broke into the box, Pym came out to challenge and brought down the forward leaving the referee no option but to point to the spot.

Sam Surridge then converted coolly to put Darren Way’s side into a comfortable position as the Glovers held out for the win.

Tickets are now back on sale for City's match against Yeovil Town at Huish Park on Saturday, December 23.

Tickets will be available on the day, provided we don't sell out of tickets before. The uncovered stand holds 1500.

The club received a couple of abusive calls on reception from supporters unhappy that the tickets had not arrived at the club earlier. Foul and abusive language aimed at our staff will not be tolerated.

The prices for the match are as follows:

You can purchase tickets via the following link, by calling the club on 01392 411243 during normal working hours or visiting the club in person. 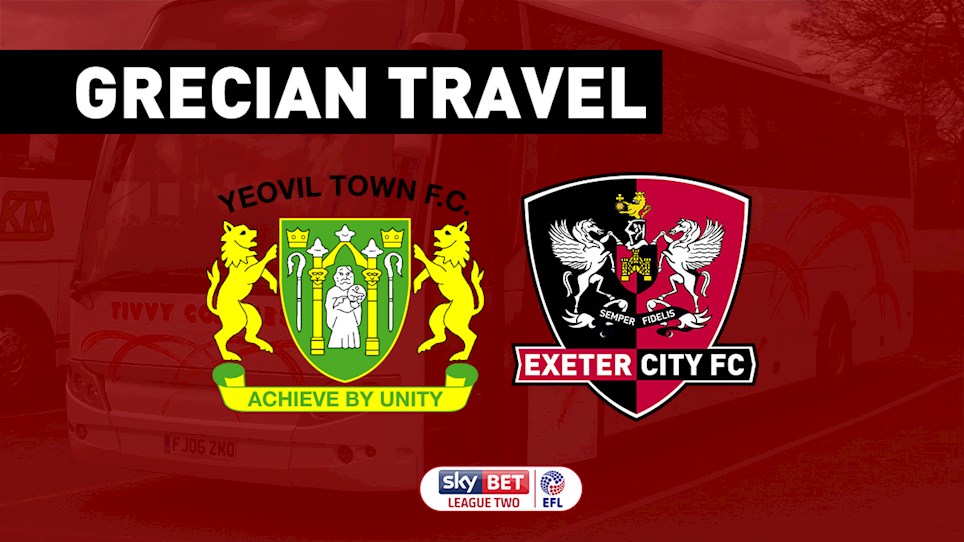